Across China: Impoverished village turns into valley of flowers

Abstract : Wang Guangren trotted down to his motorcycle early in the morning at 6 a.m., though he still had an hour to ride to his workplace only 1 km from home. 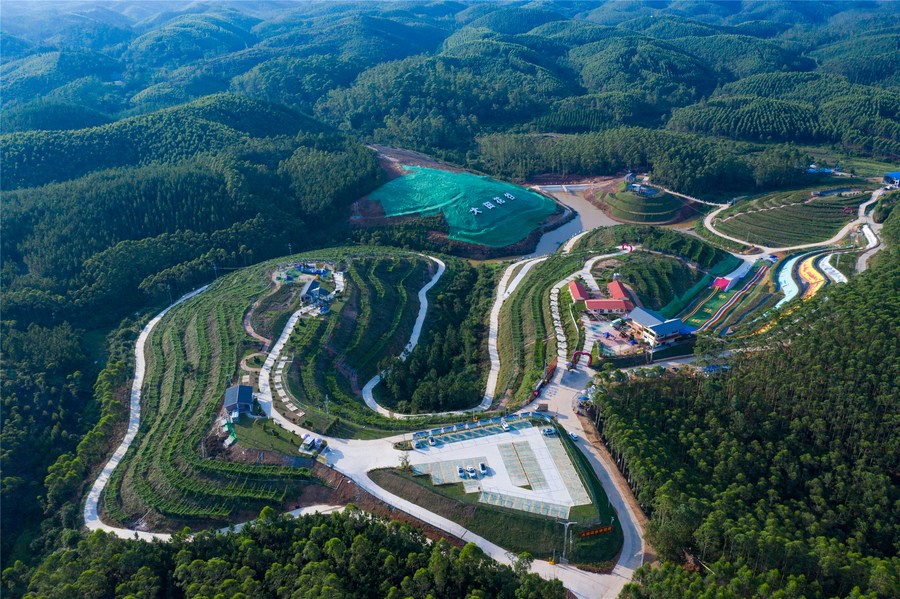 NANNING, Aug. 8 (Xinhua) -- Wang Guangren trotted down to his motorcycle early in the morning at 6 a.m., though he still had an hour to ride to his workplace only 1 km from home.

"I am a permanent staff member of our village's scenic spot, and I can't be late for work," Wang said. For decades, the 63-year-old had few opportunities to work outside the village, and stuck to his farming roots on a small piece of land.

Wang used to be an impoverished farmer in Datian Village of Hepu County, south China's Guangxi Zhuang Autonomous Region. The county once served as a port of departure along the ancient Maritime Silk Road because of its convenient land-sea transportation.

Yet walled in by mountains, Datian is one of the most remote and poverty-stricken villages in the county, with its weak infrastructure hindering the development of the local economy and leaving villagers in poverty.

"It took me one hour to ride to the town in years past, and even longer on rainy days," Wang said, adding that the dirt roads in the village were not paved until 2018.

There is only a large block -- a few hectares -- of arable land in the village, and smaller blocks are scattered in the mountains, said Huang Yi, a former official from Beihai City who was appointed to help with poverty alleviation in Datian in 2017, part of the country's efforts to eliminate absolute poverty by the end of this year. 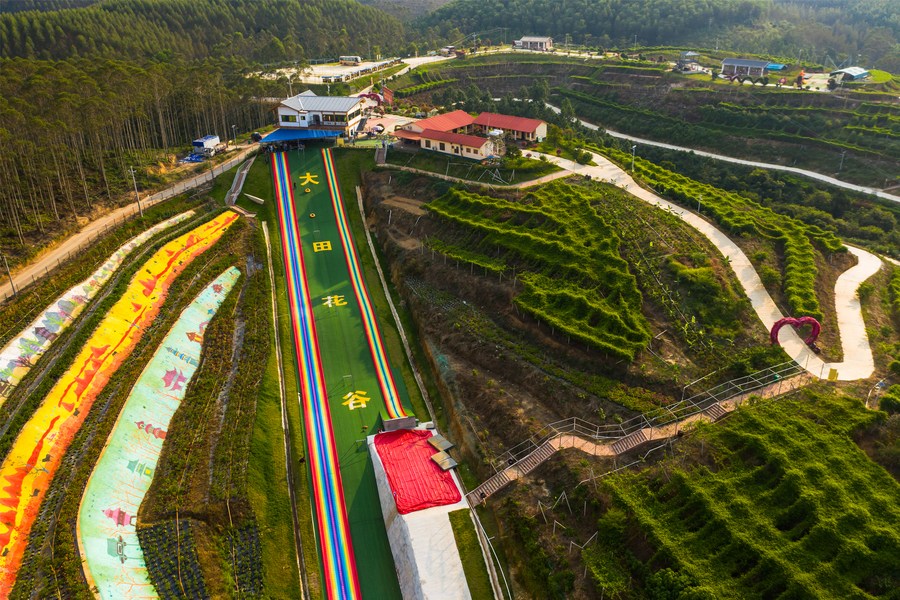 A plantation base for great bougainvillea was built in Datian, which has rich mountain resources and a suitable climate for growing the flower species. Great bougainvilleas are in high demand for use in the landscaping of urban construction, Huang noted.

"Everyone was enthusiastic to participate in site selection, leveling terrace belts on the hillside, building earth dams and installing spray facilities," Huang recalled.

In 2018, more than 60,000 pots of great bougainvillea were planted in the base, with flower sales exceeding 2 million yuan (about 287,000 U.S. dollars). The base also grew golden passion fruits.

To expand the scale of operations and increase revenue, the cooperative upgraded the plantation base into the "Datian Flower Valley," a rural scenic spot, with recreation facilities like a cableway and a children's playground.

The flower valley generated an income of more than 300,000 yuan in the first six months after it opened for business in June 2019, creating over 20 jobs for local villagers, according to Huang. Revenue from the scenic spot has been paid to the two villages and their poor households as regular dividends.

In 2019, the flower valley was rated as a four-star rural tourist attraction by the autonomous region, and the net income of Datian's collective economy exceeded 120,000 yuan, with all impoverished households in the village lifted out of poverty.

Only about half of the 40-hectare planned area of the scenic spot has been developed, and more entertainment projects will be introduced to attract more tourists, according to Huang.

Wang Guangren is comfortable with his daily routine in the flower valley, which mainly consists of weeding the garden, cutting flowers and cleaning the roads.

"Now I have two incomes, the dividends and my salary," he said.

The new Seashore ship has been launched: 4.5 billion worth for the Italian economy

Across China: Impoverished village turns into valley of flowers

Wang Guangren trotted down to his motorcycle early in the morning at 6 a.m., though he still had an hour to ride to his workplace only 1 km from home.