Abstract : China is showing its determination to help bring the global economy back on track and make continuous contributions to global economic security and sustainable development.

-- China is showing its determination to help bring the global economy back on track and make continuous contributions to global economic security and sustainable development.

-- The Global Economic Development and Security Forum of the Boao Forum for Asia is a forum on both economic and security issues around the world.

-- The three-day event attracted more than 2,600 attendees across the world.

CHANGSHA, Oct. 20 (Xinhua) -- China is showing its determination to help bring the global economy back on track and make continuous contributions to global economic security and sustainable development, according to officials, entrepreneurs and experts at a global forum held in Changsha, the capital of central China's Hunan Province.

The Global Economic Development and Security Forum of the Boao Forum for Asia (BFA), the first of which concluded on Wednesday, is a forum on both economic and security issues around the world. 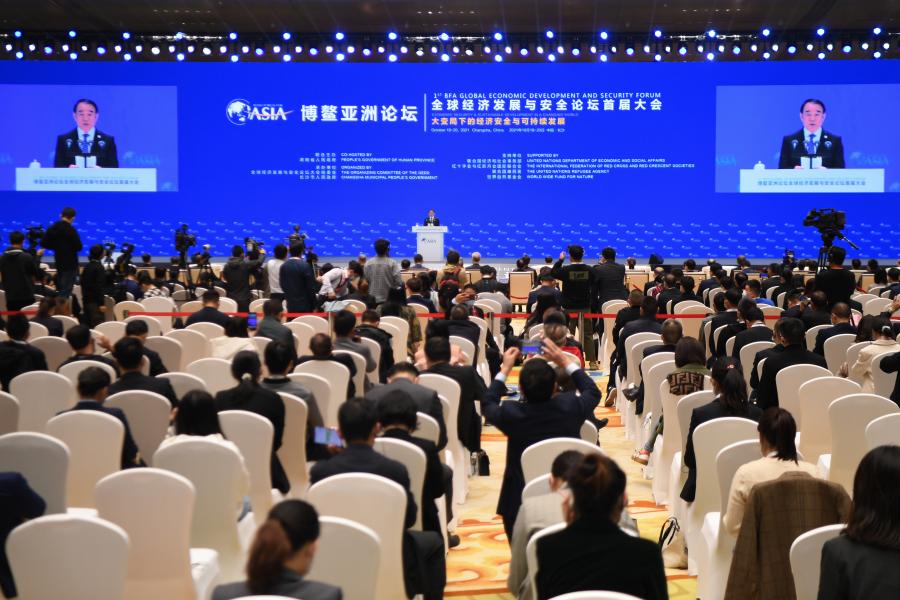 The three-day event held both online and offline, and themed "Economic Security and Sustainable Development in a Changing World," attracted more than 2,600 attendees across the world. More than 30 themed activities and sub-forums were held, covering a series of hot topics, including food security, carbon neutrality, energy security, and financial risks, according to the organizers.

Robust growth could be the biggest contribution that China is making to global economic stability, Huang Yiping, deputy dean and professor of the National School of Development at Peking University, told Xinhua.

"Our strong exports and investment in the process of recovery are also very important contributions to economic stability in other countries," Huang said.

China posted stable economic growth for the first three quarters of this year, staying on track to meet its annual growth target despite multiple challenges, including a power crunch and a resurgence of COVID-19 cases. 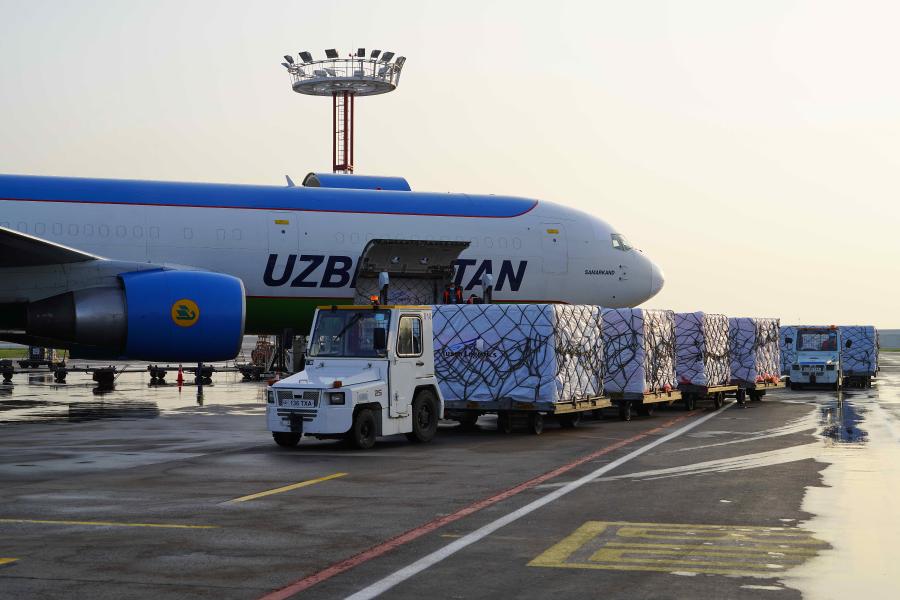 The country's gross domestic product (GDP) reached 82.31 trillion yuan (about 12.87 trillion U.S. dollars) in the first three quarters, expanding 9.8 percent year on year. That is well above its annual growth target of over 6 percent, data from the National Bureau of Statistics showed on Monday.

The news of China's latest economic performance has come at a time when the global economy has entered uncharted waters. Global economic recovery has slowed overall since the third quarter due to myriad factors such as the ongoing pandemic, surging commodity prices, and shortages in labor and the supply of key components. The data shows that despite multiple headwinds, China's economy is on a healthy track and remains a major stabilizer and driver of the global economy.

China has also actively contributed to the global goals of zero hunger and zero poverty, with its grain production increasing steadily.

In Madagascar, hybrid rice provided by China has helped eliminate local hunger. In Cuba, Moringa seeds gifted by China have grown into tangible fruits for the local people, enriching their daily diet. In Fiji, Juncao grass technology introduced by China has lifted a great number of farmers out of poverty. 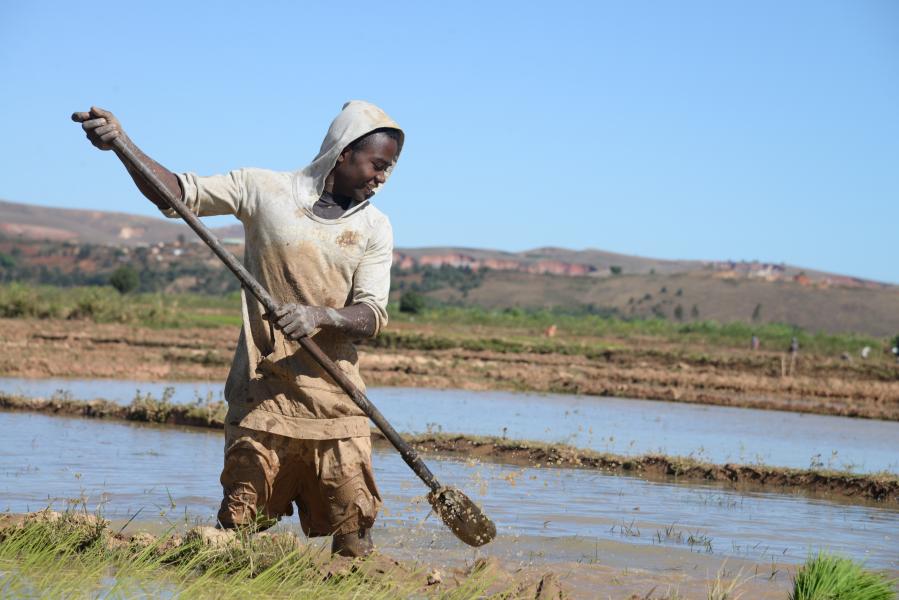 A man works in a rice field in Ambatondrazaka, Madagascar, on July 22, 2015. In Madagascar, hybrid rice provided by China has helped eliminate local hunger. (Xinhua/Dong Ruifeng)

Official statistics released by the Chinese government show that China has promoted and demonstrated over 1,500 technologies to many countries in the fields of crop production, animal husbandry, water conservancy, and agricultural product processing, increasing production by 40 percent to 70 percent on average in project areas and benefiting more than 1.5 million farming households.

The late agronomist Yuan Longping, known as the "father of hybrid rice," set a target to develop 6.67 million hectares of saline-alkali tolerant rice within one to 10 years so as to feed 100 million more people, making new contributions to food security in China and even the world, said Zhao Bingran, a professor at the China National Rice R&D Center, at a food security sub-forum. 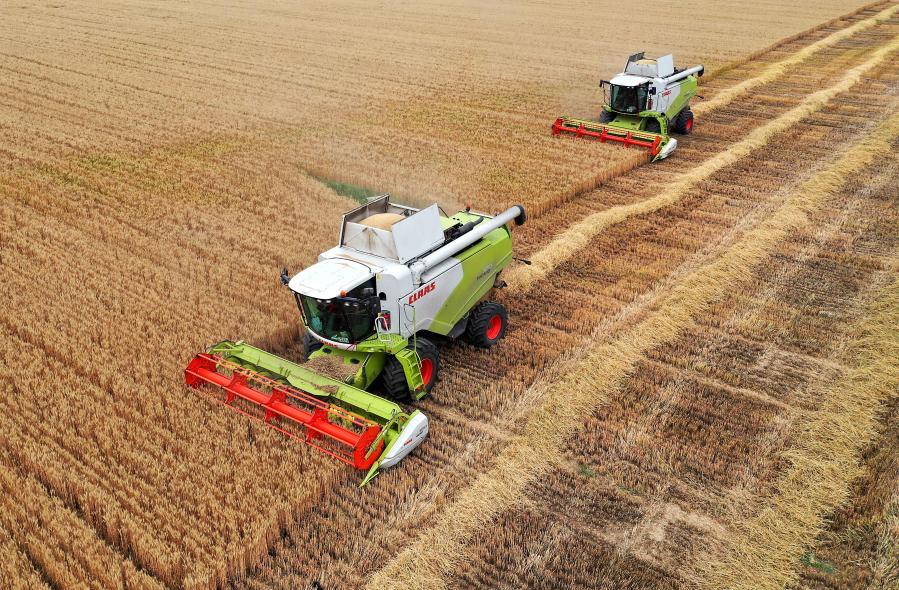 China's contributions to assisting other countries fight against the COVID-19 pandemic also gained recognition at the forum.

By mid-September, China had provided close to 1.2 billion doses of finished and bulk vaccines to over 100 countries and international organizations.

"When we were desperate for COVID-19 tests and vaccines were only a distant fantasy, China came to our aid," said Andrew Forrest, founder and chairman of the Australian company Fortescue Metals Group, at the plenary of the forum.

Massimo Bagnasco, vice president of the European Union Chamber of Commerce in China, said that many governance goals need to be achieved on a global scale rather than by one single country. Every country needs to cooperate in a better way and work together to achieve these goals. On Tuesday, the China Import and Export Fair, or the Canton Fair, concluded in the southern Chinese city of Guangzhou. It had gathered purchasers from 228 countries and regions both online and offline, attracting 600,000 people to its exhibition halls.

"The Canton Fair is conducive to helping stabilize the global supply chain and industrial chain, and is timely rain for purchasers," said fair spokesperson Xu Bing.

Facing the raging COVID-19 pandemic, frequent extreme weather events and the loss of biodiversity, countries across the world need to realize that no nation can remain immune and that international cooperation is the only way out, said Zhou Xiaochuan, vice chairman of the BFA. 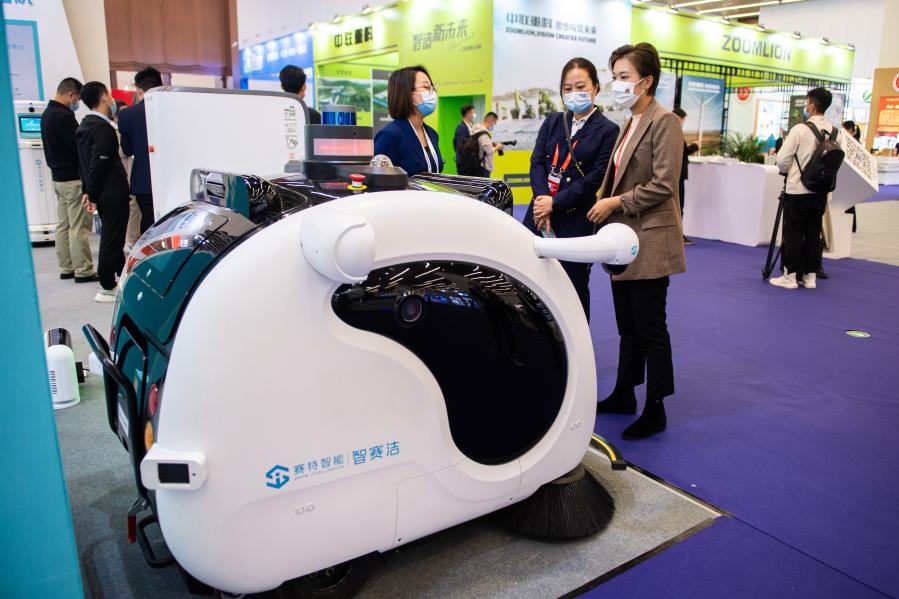 The international community should make joint efforts to promote development and security through win-win cooperation and governance, so as to achieve higher-quality, more efficient, fairer, more sustainable and safer development, and to jointly build a community with a shared future for humanity, said Zhang Qingli, vice chairman of the National Committee of the Chinese People's Political Consultative Conference.

China is showing its determination to help bring the global economy back on track and make continuous contributions to global economic security and sustainable development.