Abstract : Chinese State Councilor and Foreign Minister Wang Yi said on Tuesday that his six-nation tour in the Middle East has achieved the expected goals of enhancing cooperation with regional countries and making China's contribution to peace in the region. 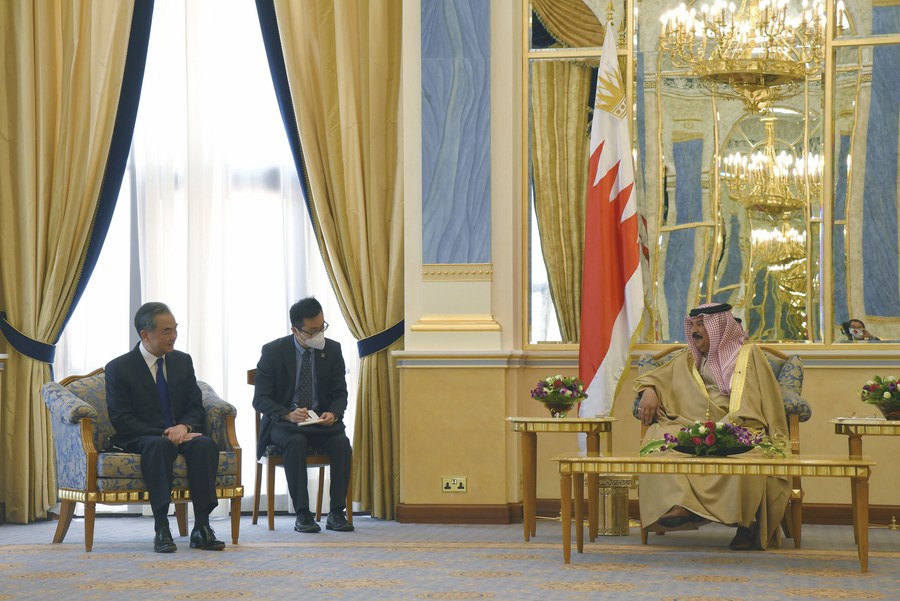 MANAMA, March 30 (Xinhua) -- Chinese State Councilor and Foreign Minister Wang Yi said on Tuesday that his six-nation tour in the Middle East has achieved the expected goals of enhancing cooperation with regional countries and making China's contribution to peace in the region.

Wang made the remarks during an interview as he concluded a week-long Middle East tour that took him to Saudi Arabia, Turkey, Iran, the United Arab Emirates (UAE), Oman and Bahrain.

The Chinese diplomat said that during his visit, he reached broad consensuses over wide-ranging issues with the leaders of the six countries, which all welcomed China to play a bigger role in Middle East affairs.

"China and the countries agreed that the sovereign independence and national dignity of all countries should be respected, and independent and diverse ways of development should be promoted," Wang said.

The seven countries, he said, vowed to upgrade their practical cooperation within the framework of the Belt and Road Initiative in light of China's construction of a new development paradigm.

On the fight against the COVID-19 pandemic, the countries pledged to continue their mutual support and reject politicization of the pandemic and vaccine, Wang said. 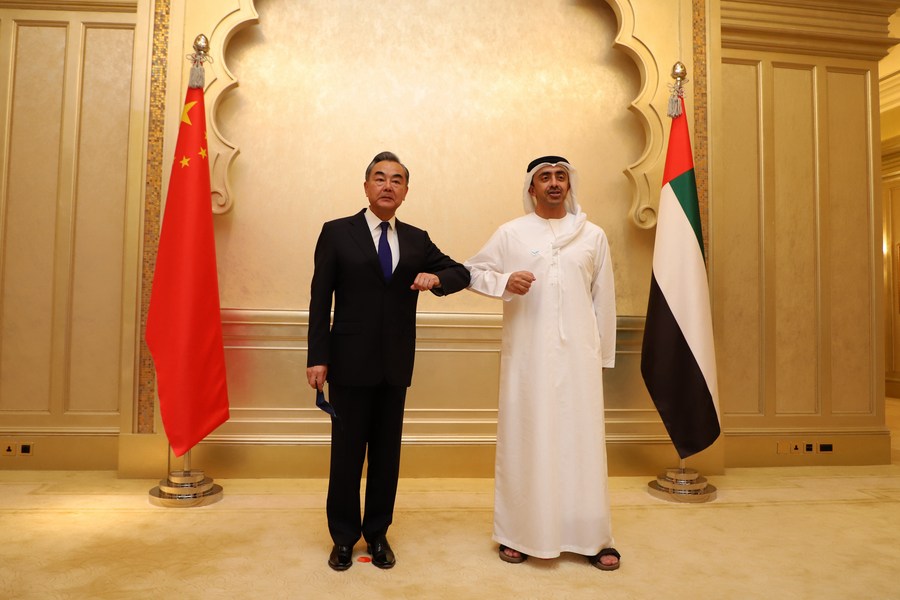 The countries agreed that inclusive dialogue should be advocated in pursuing political settlement of hotspot regional issues, and the two-state solution should be the key for seeking an early, fair and reasonable solution to the Palestinian issue, the Chinese diplomat said.

Regarding the Iranian nuclear issue, illegitimate sanctions and long-arm jurisdiction should be lifted as soon as possible, and compliance to the Iranian nuclear deal, or the Joint Comprehensive Plan of Action (JCPOA), should be resumed in an orderly manner with synchronization and reciprocity, he said.

China and the six countries also agreed to explore the establishment of a regional dialogue platform to maintain the security and stability of the Gulf through communication and consultation, Wang added.

During his visit to Saudi Arabia, Wang unveiled a five-point initiative for achieving security and stability in the Middle East, which calls for advocating mutual respect, upholding equity and justice, achieving non-proliferation, jointly fostering collective security, and accelerating development cooperation.

The initiative was well received by many of the state leaders and foreign ministers during the visit, Wang said, noting that the Palestinian Foreign Ministry issued a statement expressing willingness to cooperate with China to revive the stalled Palestinian-Israeli peace talks.

He elaborated on the ways to implement the peace initiative through close communication and coordination with all the related parties:

Firstly, China fully supports the international mediation over the two-state solution to the Palestinian-Israeli conflict. When taking the rotating presidency of the UN Security Council in May, China will push for holding full deliberation of this issue, and will host a seminar for Palestinian and Israeli peace activists on a proper date. 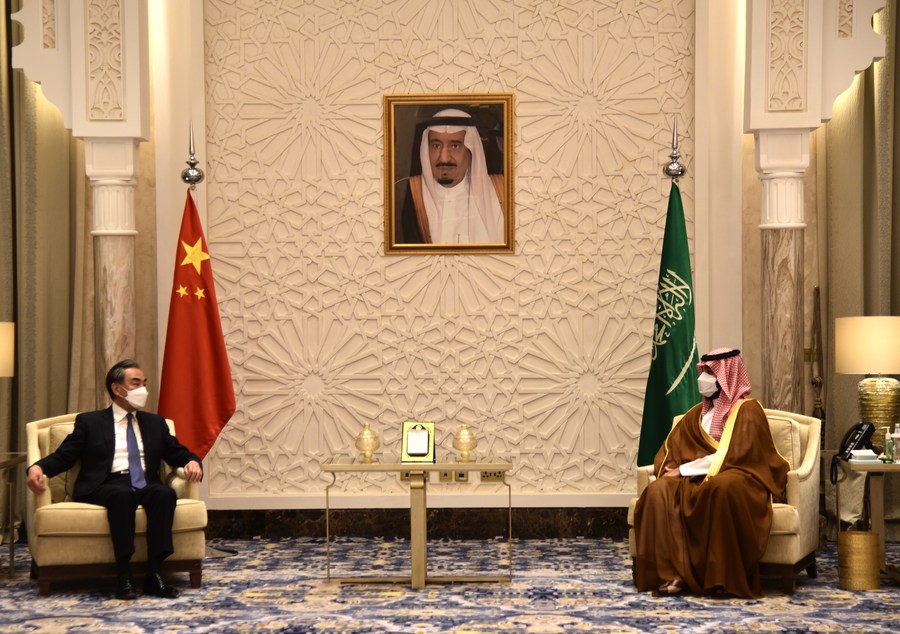 Secondly, China will continue its active participation in the process of resolving the Iranian nuclear issue. China has sent officials to Moscow to discuss with Russia and Iran the roadmap and timetable of reviving the nuclear deal. Also, China will keep close communication with Gulf countries over holding multilateral forums in China on the Gulf security, starting from easy topics such as safeguarding oil infrastructure and shipping-lane security.

Thirdly, China will boost vaccine cooperation with Mideast countries in a bid to help them speed up the return to normal life, promote recovery of local economies, and ensure smooth implementation of major projects with the Chinese participation.

Fourthly, China will hold in 2021 the China-Arab Reform and Development Forum and the Middle East Security Forum to enhance exchanges of experience in governance, promote dialogues between civilizations, and deepen cooperation on fighting terrorism and de-radicalization.

Facing the COVID-19 pandemic, China and Mideast countries join hands in the fight against it, which has sublimated their friendship, deepened mutual trust, and opened up new areas of cooperation, Wang said.

The Chinese government has practically fulfilled its solemn commitment to making vaccines a global public good, donating and exporting nearly 38 million doses of vaccines to 17 countries in the Middle East, Wang noted.

He said China is willing to work with the countries in the Middle East to push forward the anti-epidemic cooperation: 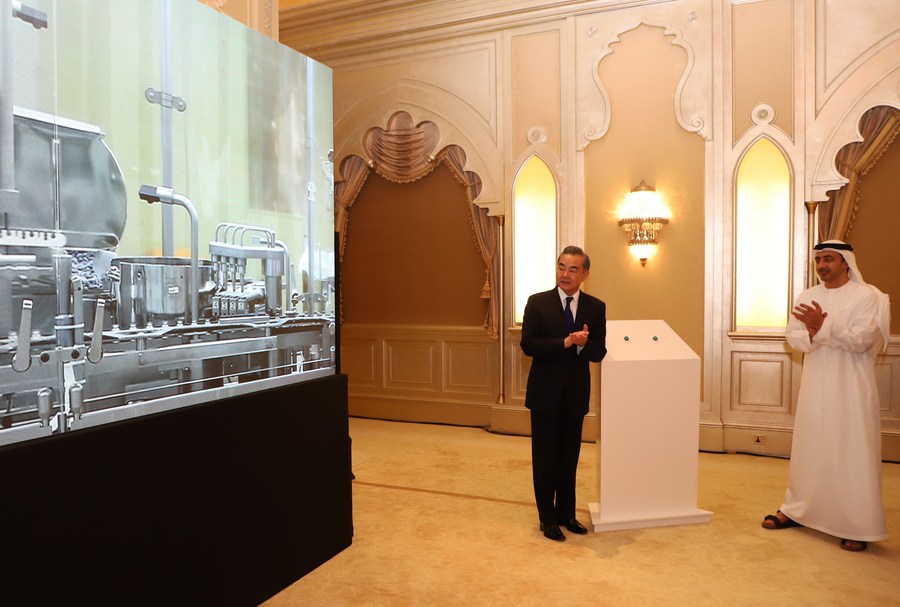 Firstly, China will step up vaccine cooperation with countries in the Middle East and continue to donate and export vaccines to the region to the best of its ability.

Secondly, China will promote the establishment of an international mechanism for mutual recognition of health codes to facilitate personnel exchanges.

Thirdly, China and Mideast countries will continue to build consensus on preventing the politicization of pandemic from reemerging, and make the vaccines available and affordable to all countries.

Facing complex changes in the international situation, the China-Arab relations have set a good example for the South-South cooperation, Wang touted.

Over the past year and more, Chinese President Xi Jinping and many Arab heads of state have held over 10 phone calls and exchanged nearly 20 letters, pointing the way for the development of the China-Arab relations, he said.

China and the Arab countries firmly support each other, jointly defend the purposes and principles of the UN Charter, and safeguard multilateralism, equity and justice, the Chinese minister said. 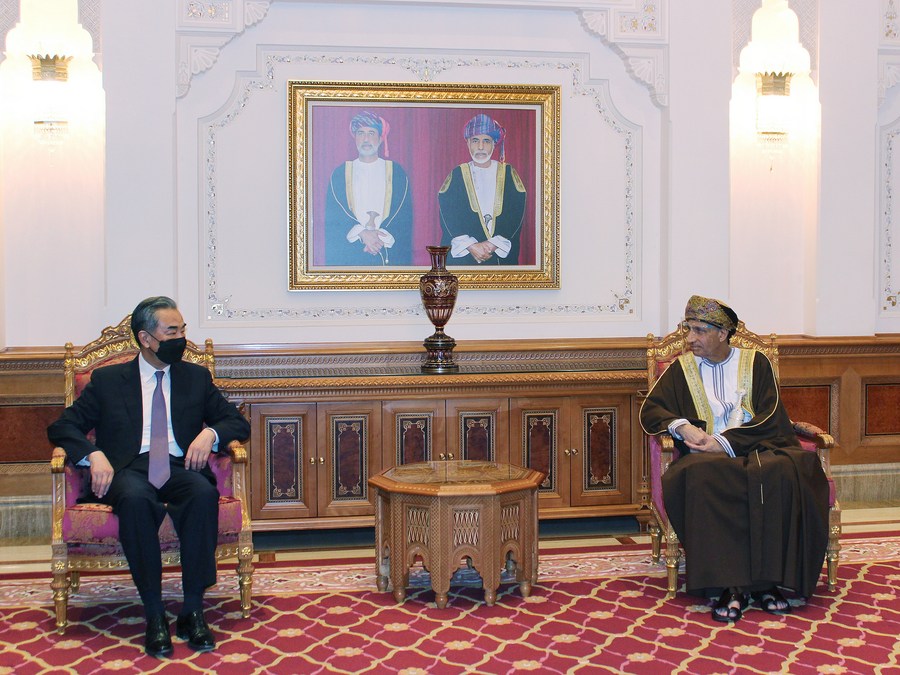 "And the anti-pandemic cooperation has demonstrated the China-Arab brotherly friendship of sharing weal and woe," Wang said.

"We need to build closer people-to-people ties, make good use of the China-Arab States Cooperation Forum and other mechanisms to deepen exchanges and cooperation on the youth, culture, education and tourism, and lay a solid foundation for lasting friendship," he added.

Wang said that the views of human rights held by some Western countries don't represent those of the international community, noting that such views of the developing countries should be more listened to, respected and absorbed.

"The six (Middle East) countries I visited this time and China are all developing countries and share same or similar views on the human rights issue," Wang said.

"We agree that human rights ought to be comprehensive and balanced. The rights to live and develop are as important as the political and social rights, and fairness and justice should be respected the same as democracy and freedom," he noted. During the recent session of the UN Human Rights Council, many developing countries, including 21 Arab countries, voiced solidarity with China, Wang said, noting China has always objected to using human rights as an excuse to meddle in the domestic affairs of Arab countries.

"China is keen to work together with Arab and other regional countries to champion the policy of non-interference in other countries' internal affairs, uphold the purposes and principles of the UN Charter, and preserve the common interests of each other and the developing countries," he said.

He said China is ready to work with Mideast countries to promote cooperation mainly in three areas: further synergy of their development strategies, better integration of their resource markets, and exchange of experiences on governance. Secondly, the two sides should step up cooperation on energy and resources as well as high tech. Wang suggested the two sides consolidate their energy cooperation along the entire industrial chain, promote trade facilitation, innovate investment models, and expand the scale of bilateral currency swaps, in addition to increasing cooperation in information technologies such as 5G, big data and artificial intelligence.

Thirdly, the two sides should hold in-depth exchange on the views of governing philosophies. In this regard, China is ready to focus more on helping Mideast countries to improve the livelihood of their peoples so to enable them to share the fruits of economic development, the Chinese diplomat said.

Chinese State Councilor and Foreign Minister Wang Yi said on Tuesday that his six-nation tour in the Middle East has achieved the expected goals of enhancing cooperation with regional countries and making China's contribution to peace in the region.