Abstract : Chinese Premier Li Keqiang on Monday made a four-pronged proposal for the future development of the Shanghai Cooperation Organization (SCO). 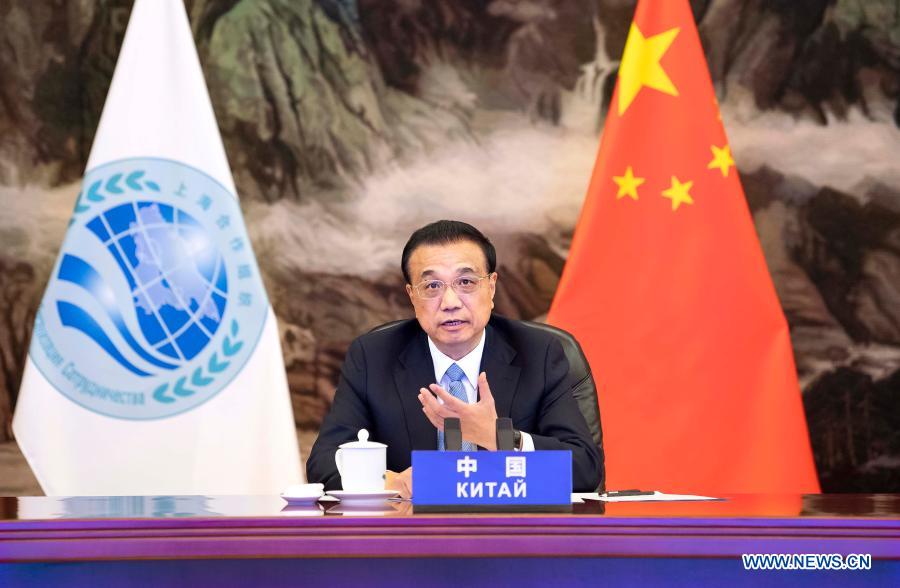 Chinese Premier Li Keqiang attends the 19th meeting of the Council of Heads of Government of Member States of the Shanghai Cooperation Organization via video link, at the Great Hall of the People in Beijing, capital of China, Nov. 30, 2020. (Xinhua/Li Tao)

Li made the remarks in Beijing while addressing the 19th meeting of the Council of Heads of Government of Member States of the Shanghai Cooperation Organization, which was held via video link.

Noting that the SCO members have joined hands to fight against the virus since the outbreak of COVID-19, Li expressed the hope that all parties would implement the outcomes of the recently held SCO summit and steadily advance the SCO's cooperation agendas so as to open up new vistas for its development in the post-pandemic era.

He called on SCO members to continue to carry out joint counter-terrorism exercises and cooperation on deradicalization, effectively deal with such new challenges as cyber terrorism, and jointly safeguard data security.

He also called for supporting Afghanistan's national reconciliation process and helping the country restore stability and development at an early date.

SCO members should uphold openness and cooperation and lift regional trade and investment liberalization and facilitation, Li said, calling on members to align the Belt and Road Initiative with the development strategies of the member states and promote high-quality regional interconnectivity.

They should also build a regional network of "fast tracks" and "green lanes" to facilitate the flow of people and goods, and expand the trade of farm produce, Li said.

He also called for expanding new areas of cooperation, such as health, culture and sports, and expediting cooperation on the research and development of vaccines and drugs.

"COVID-19 vaccines, when developed and deployed in China, will be made a global public good. This will be China's contribution to ensuring vaccine accessibility and affordability," he said.

Li stressed the need to expand two-way opening up and investment, stay committed to fostering an open world economy, and safeguard the smooth operation of global industrial and supply chains.

China is committed to a peaceful development path and a win-win strategy of opening up and to sharing opportunities with the rest of the world as it pursues development, Li said.

All parties attending the meeting spoke highly of the important progress achieved in various fields of SCO cooperation, and expressed their belief that the SCO has become an important platform for promoting the development of all member states and maintaining regional peace and stability.

Faced with the challenge of COVID-19, all parties pledged to work together to fight against the pandemic, enhance the capacity building of member states in public health, and make joint efforts in vaccine and medicine research and development.

All parties vowed to safeguard multilateralism and free trade, promote trade, investment and personnel exchanges, facilitate cooperation in the joint construction of the Belt and Road, tap the potential in interconnectivity, and speed up economic recovery in the post-pandemic era.

They also agreed to jointly combat terrorism in all its forms, safeguard regional security and stability, strengthen people-to-people and cultural exchanges, and create solid public support for mutually beneficial cooperation.

Li and the leaders of other member states signed a joint communique and approved a series of agreements and resolutions on SCO cooperation in trade and other areas.

Chinese Premier Li Keqiang on Monday made a four-pronged proposal for the future development of the Shanghai Cooperation Organization (SCO).