Abstract : With the 2021 China International Fair for Trade in Services (CIFTIS) drawing to a close Tuesday in Beijing, the country has expressed its willingness to share technological achievements with the rest of the world to contribute to the global economic recovery.

Photo taken on Sept. 6, 2021 shows a view of the China National Convention Center during the China International Fair for Trade in Services (CIFTIS) in Beijng, capital of China. (Xinhua/Wang Tiancong)

BEIJING, Sept. 7 (Xinhua) -- With the 2021 China International Fair for Trade in Services (CIFTIS) drawing to a close Tuesday in Beijing, the country has expressed its willingness to share technological achievements with the rest of the world to contribute to the global economic recovery.

Under strict epidemic control and prevention measures, this year's CIFTIS has attracted more than 12,000 enterprises. Representatives from 153 countries and regions signed up for the event, according to the Ministry of Commerce (MOC).

Preliminary statistics showed that this year's CIFTIS saw a total of 1,672 various projects and contracts concluded, said a press conference held Tuesday afternoon at the fair.

This year's fair highlighted new formats and models such as digital trade, 5G communication, and the industrial Internet of Things. It also comprehensively exchanged new ideas, displayed new services, and released current achievements. At the same time, it took place both online and offline via digital technology, which demonstrates the great potential of China's digital and intelligent economic development, said Wang Zhihua, an official with the MOC.

MOC data showed that China's services trade rose by 7.3 percent year on year to nearly 2.81 trillion yuan (about 435 billion U.S. dollars) in the first seven months of the year. 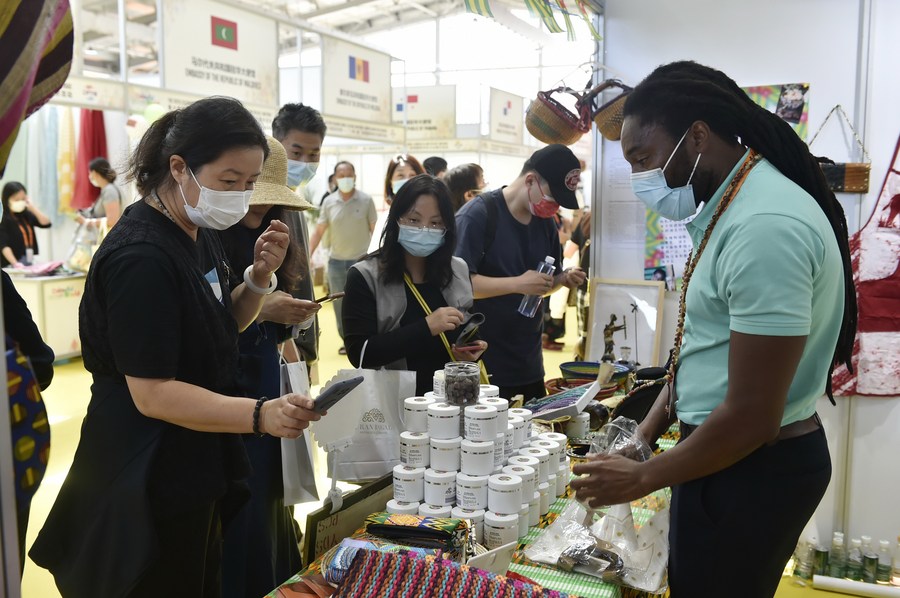 Visitors purchase specialty goods at the booth of Togo during the 2021 China International Fair for Trade in Services (CIFTIS) in Beijng, capital of China, Sept. 6, 2021. (Xinhua/Lu Peng)

Foreign exhibitors and commerce officials have expressed their great interest in investing in the Chinese market at the fair as China has massive potential for services trade development. It will also bring opportunities for other countries, thus providing new globalization momentum.

Nicolai Meyer Lehmann Lundsbjerg, general manager of the Danish Chamber of Commerce in China, said: "I think this year's CIFTIS will give the Danish companies a good opportunity to meet other collaborative partners in China."

Ivo Ganchev, a businessman from Bulgaria, hoped that Bulgaria and China would have more in-depth exchanges in promoting software outsourcing, financial technology, infrastructure, and other services areas.

Gianpaolo Bruno, director of the Beijing Office of the Italian Trade Agency, said he hopes to take advantage of the CIFTIS platform to help Italian enterprises enter the Chinese market. The agency also wants to promote aspects of the service industry such as catering, health, medical and safety equipment, and tourism in Italy.

Conor O'Sullivan, manager of the Irish Food Board's China office, said the CIFTIS offered great exposure for Irish products in China and a platform for seeking opportunities for collaboration.

"Local partners are often very innovative and understand the market better. So we want to provide them with good ingredients and work with them to develop products that suit the market," he said.

Mattias Debroyer, the economic and commercial consul with the Brussels Agency for Business Support, said 90 percent of the economy in Brussels is services-based, especially digital, financial, and sustainability services in terms of architecture, engineering, and ecology.

"We are here to promote cooperation. I hope that visitors can learn more about Brussels, the advantages of investing in Brussels, and our strong sectors," he said. 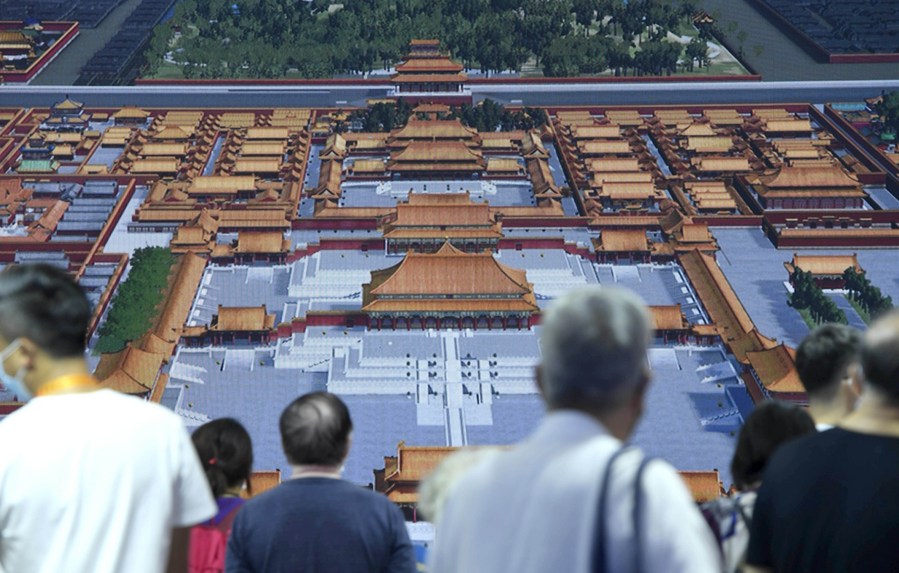 Visitors watch HD film about the Palace Museum during the 2021 China International Fair for Trade in Services (CIFTIS) in Beijng, capital of China, on Sept. 7, 2021. (Xinhua/Wu Wei)

Against the backdrop of international trade suffering a significant shock since the outbreak of COVID-19, China has adopted various measures to boost the opening-up of the services trade sector. These measures include implementing a negative list for cross-border services trade countrywide and exploring the development of national demonstration zones for the innovative development of trade in services. They also include scaling up support for services sector growth in the Belt and Road partner countries, among others, said Li Jun, director with the Institute of International Trade in Services under the MOC.

The CIFTIS is China's solution to connect with the international market and engage in international cooperation, which is of great significance to the rebound of trade in services and the recovery of the world economy, said Li.

According to Gao Liqiang, vice president of JD Group, an innovative supply chain of high-quality fresh aquatic products connecting ASEAN has been constructed to deliver fresh seafood from Southeast Asian countries onto the tables of Chinese consumers at a speed unimaginable years ago.

Liu Hui, director of the JD Research Institute for Consumption and Industrial Development, said the group established cooperation with over 90 percent of the 2021 Fortune 500 companies, seeking a deeper integration into the global industry chain with its digital capabilities and supply chain resources. 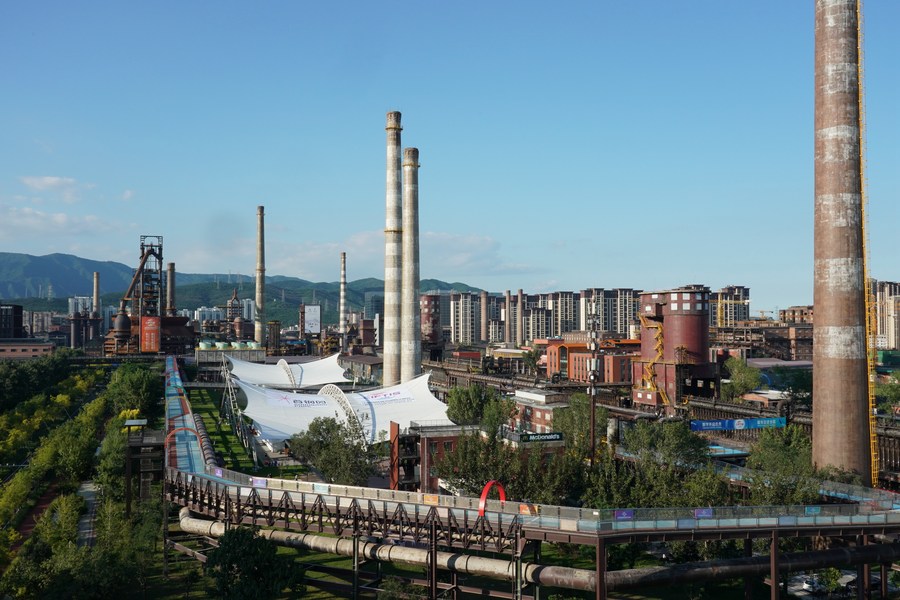 Photo taken on Sept. 6, 2021 shows a view of Shougang Park during the China International Fair for Trade in Services (CIFTIS) in Beijng, capital of China. (Xinhua/Zhang Chenlin)

The 2021 CIFTIS also paid great attention to supporting the development of the services trade industry in Belt and Road countries and regions.

Zhai Dongsheng, director of the Belt and Road Initiative Center under the National Development and Reform Commission, shared some insightful episodes showcasing the shared benefit of the B&R.

In China, health services in frontier regions such as the northwest Xinjiang Uygur Autonomous Region and the southern Guangxi Zhuang Autonomous Region are relatively underdeveloped compared with other parts of the country. But still, they have taken advantage of geographical advantages and remote internet service technology to provide medical and health services to patients in central and southeast Asian countries, with good economic and social benefits, according to Zhai.

Alfredo Rolando Grosman, president of the China-Peru Investment Development Association, said: "The CIFTIS is a great event for win-win cooperation between China and Belt and Road countries, for example, my country Peru. Many young Peruvian technological companies would benefit greatly from trade in services with fellow technology counterparts in China."

With the 2021 China International Fair for Trade in Services (CIFTIS) drawing to a close Tuesday in Beijing, the country has expressed its willingness to share technological achievements with the rest of the world to contribute to the global economic recovery.