Abstract : China and Benin signed a Memorandum of Understanding (MOU) for cooperation on the Belt and Road Initiative (BRI) on June 25, 2019.

China and Benin signed a Memorandum of Understanding (MOU) for cooperation on the Belt and Road Initiative (BRI) on June 25, 2019. 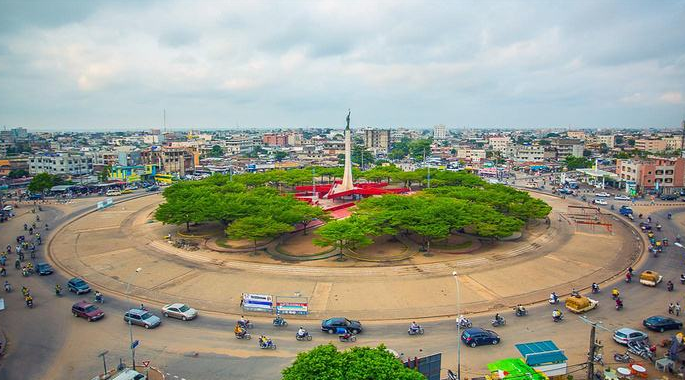 Benin, officially Republic of Benin, French République du Bénin, formerly (until 1975) Dahomeyor (1975–90) People’s Republic of Benin, country of western Africa. It consists of a narrow wedge of territory extending northward for about 420 miles (675 kilometres) from the Gulf of Guineain the Atlantic Ocean, on which it has a 75-mile seacoast, to the Niger River, which forms part of Benin’sorthern border with Niger. Benin is bordered to the northwest by Burkina Faso, to the east by Nigeria, and to the west by Togo. The official capital is Porto-Novo, but Cotonouis Benin’s largest city, its chief port, and its de facto administrative capital. Benin was a French colony from the late 19th century until 1960.

Benin consists of five natural regions. The coastal region is low, flat, and sandy, backed by tidal marshes and lagoons.

Behind the coastal region extends the barre country—the word being a French adaptation of the Portuguese word barro (“clay”). A fertile plateau, the barre region contains the Lama Marsh, a vast swampy area stretching from Abomey to Allada. The landscape is generally flat, although occasional hills occur, rising to about 1,300 feet (400 metres).

The Benin plateaus, four in number, are to be found in the environs of Abomey, Kétou, Aplahoué (or Parahoué), and Zagnanado. The plateaus consist of clays on a crystal line base. The Abomey, Aplahoué, and Zagnanado plateaus are from 300 to 750 feet high, and the Kétou plateau is up to 500 feet in height.

The Atakora Mountains, in the northwest of the country, form a continuation of the Togo Mountains to the south. Running southwest to northeast and reaching an altitude of 2,103 feet (641 metres) at their highest point, they consist of a highly metamorphosed quartzite interior.

The Niger plains, in the northeast of Benin, slope down to the Niger River valley. They consist of clayey sandstones.

Despite attempts at greater national unity and integration since 1960, differences among Benin’s ethnic groups survive to a marked degree. The Fon, who make up about two-fifths of the population, live in various parts of the country and especially in Cotonou. The Yoruba, who are related to the Nigerian Yoruba, live mainly in southeastern Benin and constitute about one-eighth of Benin’s population. In the vicinity of Porto-Novo, the Goun (Gun) and the Yoruba (known in Pobé and Kétou as Nago, or Nagot) are so intermixed as to be hardly distinguishable. Among other southern groups are various Adja peoples, including the Aizo, the Holi, and the Mina.

The Bariba, the fourth largest ethnic group, comprise several subgroups and make up about one-tenth of Benin’s population. They inhabit the northeast, especially towns such as Nikki and Kandithat were once Bariba kingdoms. The Somba (Ditamari) are found in Natitingou and in villages in the northwest. Other northern groups include the Dendi, the Pila (Pilapila), the Yoa-Lokpa, and the nomadic Fulani(Peul). Europeans, Lebanese, South Asians, and Africans from other countries are among the foreigners who reside in Benin, primarily in Cotonou and Porto-Novo.

Since independence, Benin’s regular and developmental budgets have been dependent on external support, primarily from France and international organizations. This support has rendered a little less painful the formidable economic stagnation and low tandard of living of the overwhelming majority of the population.

The few stretches of tropical forest that remain in Benin, mostly in the southwest and central areas, contain mahogany, iroko, teak, samba, and other tropical hardwoods. The rivers and lagoons are rich in fish. Mineral deposits include iron ore both in the Atakora Mountainsand northeast of Kandi, limestone deposits at Onigbolo, chromium ore and a little gold in the northwest near Natitingou, marble at Dadjo, an important deposit of pottery clay at Sakété, and ilmenite (a mineral source of titanium) near the coast. Offshore oil was discovered in 1968 in the Sémé field near Cotonouand has been exploited since 1982.

About 70 percent of the working population depends on agriculture. Since the mid-1980s Benin has produced yams, cassava, corn (maize), millet, beans, and rice to achieve self-sufficiency in staple foods.

Livestock include cattle, sheep and goats, pigs, horses, and poultry. Substantial quantities of fish are caught annually in the lagoons and rivers, while coastal fishing produces a smaller, but growing, amount. Most of the fish is exported to Nigeriaor Togo. Shrimp and deep-sea fishing are developing, using modern vessels.

Electricity is generated thermally by plants located at Bohicon, Parakou, Cotonou, and Porto-Novo. About half of Benin’s demand for electricity is met by importing power from Ghana’s Volta River Project at Akosombo. In 1988 operations commenced at the hydroelectric installation of the Mono River Dam, a joint ventureetween Benin and Togo on their common southern boundary.

Benin’s export earnings rely on agricultural products, such as cotton, palm oil, cocoa, and coffee, exported to such countries as India, Malaysia, and Bangladesh. Informal trade (smuggling) across the border with Nigeria has also affected Benin’s negative trade balance. One of Benin’s main, albeit underexploited, trade assets is the deepwater port at Cotonou, which serves as a sea outlet for the Republic of Nigerand as a secondary port for Nigeria and thus holds a potential to earn lucrative customs duties.

French colonial rule and subsequent close ties with France have left a deep impact on all aspects of cultural life, especially among the educated segments of the population and in the southern cities. Each ethnic group also has its own centuries-old tradition, which itself often mixes with the French influence. These cultural traditions are clustered in two distinct regions, the largely Muslim north and the largely animist and Christian south.

In Cotonou people can find many kinds of commercial enterprises, often with a French flavour, such as restaurants, cafés, and discotheques. Diplomats of foreign governments and many of Benin’s elite live in newer residential sections. There are several movie theatres and several hotels that provide entertainment. Most other towns have modern sections on a smaller scale.

In other sections of the towns, however, tradition dominates cultural life. Extended families live in family compounds in distinct neighbourhoods, where they practice religious rites and celebrate festivals with music and dance. Markets where foodstuffs, clothing, and traditional medicines and arts are sold are important centres of daily life.

China and Benin signed a Memorandum of Understanding (MOU) for cooperation on the Belt and Road Initiative (BRI) on June 25, 2019.