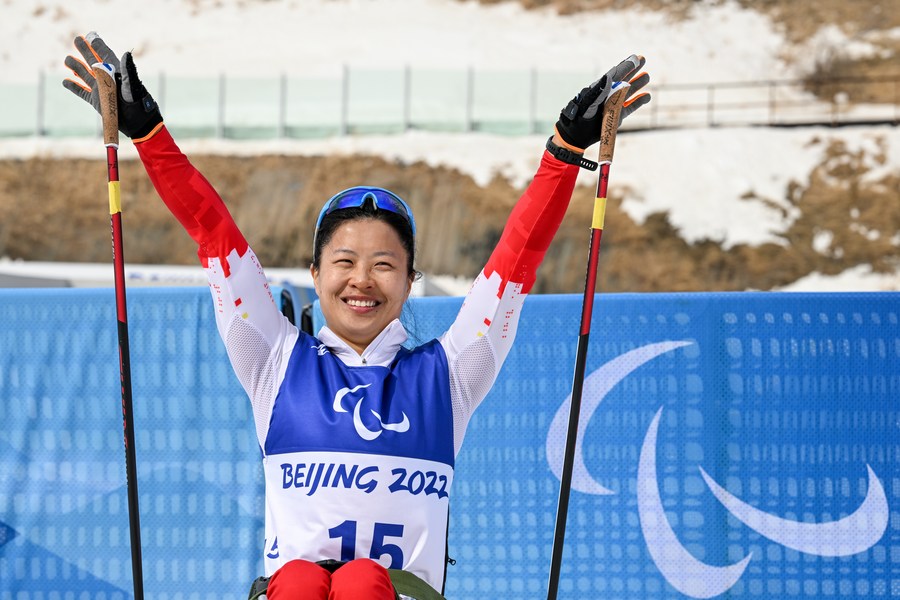 At the Beijing 2022 Winter Olympics, China ranked third after claiming nine gold, four silver and two bronze medals, with its number of golds as well as its total medals both hitting record highs in the country's Winter Olympic history.

As the fervor ignited by the 2022 Olympic and Paralympic Winter Games continues, more and more Chinese people are expressing interest in sports, and there is a growing need for more sports facilities and spaces.

It is early spring in Beijing, and the temperature rises just above zero degrees Celsius in the mornings.

Next to the West Moat in downtown Beijing, joggers are eager to hit the track along the river and enjoy the view.

The change began a decade ago when the 18th National Congress of the Communist Party of China in November 2012 proposed a nationwide fitness campaign and the promotion of the all-round development of mass sports and competitive sports.

Plans have since been made and carried out by authorities at all levels to provide more convenience for athletes, including plans for grand stadiums in big cities and plans for open-air gyms in small villages.

The decade of changes was part of China's efforts to build a moderately prosperous society. China's per capita GDP in 2021 grew to 80,976 yuan, or 12,551 U.S. dollars when calculated according to the annual average exchange rate, up from 39,771 yuan in 2012.

Well-off Chinese people now have more time and money to spend on sports. The total output of China's sports industry in 2020 hit 2.74 trillion yuan (about 433.5 billion dollars). A recent survey showed that 87 percent of people who say they often work out spend half an hour to two hours per session.

Chinese people are also more confident about competitive sports. They see athletes who challenge the limits with persistence and passion as heroes, no matter whether they win medals or miss the podium.

Sprinter Su Bingtian made history at the Tokyo 2020 Olympic Games as the first Chinese athlete to qualify for the men's 100-meter final. Finishing sixth in the final, he became a popular sports icon in China, and was China's standard-bearer at the Games' closing ceremony and one of the torchbearers at the opening ceremony of the Beijing 2022 Winter Olympics.

The popularity of sports in China is expected to rise further, as the country has set out on its new journey of building a modern socialist country.

In a development blueprint for sports during the 14th Five-Year Plan period, 38.5 percent of the population will take part in routine exercise by 2025, driving the total size of China's sports industry to 5 trillion yuan.