BEIJING, Nov. 25 (Xinhua) -- As the country is moving toward the goal of "bringing 300 million people to participate in ice and snow sports", the ice and snow sports industry is ushering in unprecedented development opportunities in China. With the Beijing Winter Olympics as an opportunity, China's ice and snow sports equipment industry has striven to overcome a lot of technical difficulties, and is embracing leap-forward development today, since related products have been started from scratch, related brands developed into high-quality ones, and related production oriented on from quantity to quality. 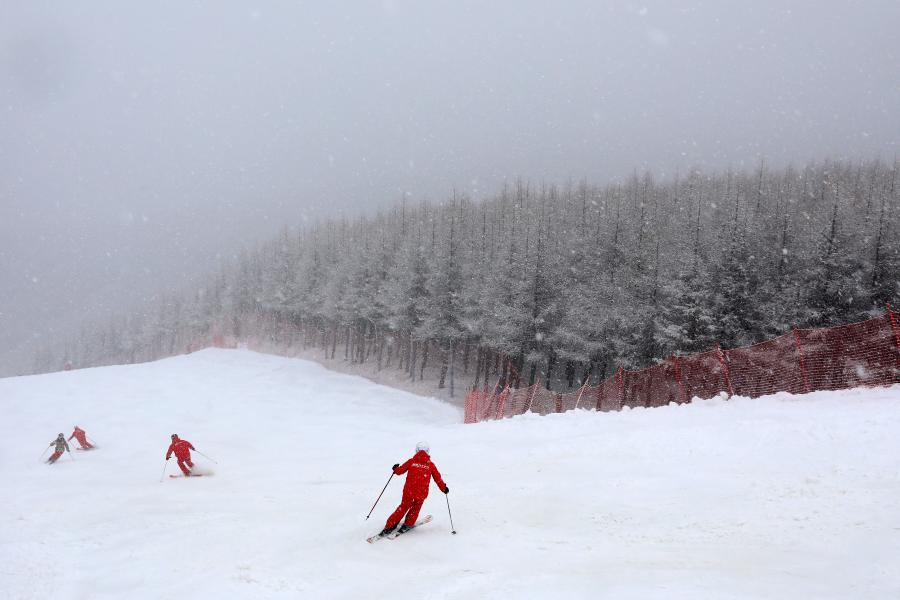 People ski at a ski field during a snowfall in Chongli District of Zhangjiakou City, north China's Hebei Province, Nov. 18, 2020.

The ice and snow sports equipment industry has been developed fast, with its localization rate and market share continuing to increase.

It is learned that the current world snowcat market has almost occupied by two companies, a German one and an Italian one. Seizing the opportunity of preparing for the Beijing Winter Olympics, Hebei Xuanhua Construction Machinery Co., Ltd. carried out independent innovation with its rich experience in the development and manufacturing of tracked vehicles."SG400 snowcat is China's first high-end high-horsepower one, filling the domestic gap in this field. We possess independent intellectual property rights in key core technologies such as its chassis suspension, electronic control system and hydraulic transmission," said Wen Xiaoxuan, Chief Designer of SG400 and Deputy Director of Snow & Ice Business Department of Hebei Xuanhua Construction Machinery Co., Ltd.

A waxing truck, independently developed by several enterprises in Shandong Province, served the national training team of snow events who were training at a cross-country ski resort in Wenquan County,Xinjiang Uygur Autonomous Region. As China's first home-made waxing truck, it was set on a snowboard waxing platform with ventilation. According to An Zetao, Captain of the waxing truck, it integrated technologies such as solar photovoltaic power generation, energy storage, 5G industrial interconnection, big data and artificial intelligence, and 66 patents have been declared during its development and design process.

In the future, it is necessary to strengthen the original and core technologies to create internationally competitive enterprisesand brands.

The skate brand Heilong, also known as Black Dragon, was founded in the 1950s to1960s and has exported its products to more than 20 countries and regions. After entering into the 21st century, its original products did not keep up with the development pace and its operation faltered. With the successful bid of Beijing to host the Winter Olympics, Qiqihar Heilong Skates Co., Ltd. (Heilong Skates)has been ushering in the opportunity to reshape its brand after acquisition and reorganization.

Since 2015, the average annual sales volume of Heilong Skates has increased by about 30 percent. The domestic demand has obviously increased, while the sales channels are recovering in overseas markets. Today, Heilong Skates has developed a new generation of skates jointly with domestic colleges and universities, for which, intellectual property rights are being applied in terms of structure and material. It is believed that more athletes can wear skates of Chinese brands in international competitions in the future.

-- Production oriented on from quantityto quality