Abstract : Al-Sisi said Egypt was willing to connect its own development plans with the Belt and Road Initiative and expand infrastructure cooperation with China under the framework of the Asian Infrastructure Investment Bank.

CAIRO, Oct. 8 (Xinhua) -- Amid the raging COVID-19 pandemic, a security manager at a construction site needs to care more.

Some 50 km east of the capital Cairo, where a Chinese firm has been building a vast business district in Egypt's new administrative capital, Liu Jingkun inspects the staff accommodation every day, ensuring the anti-coronavirus precautions are observed by all. 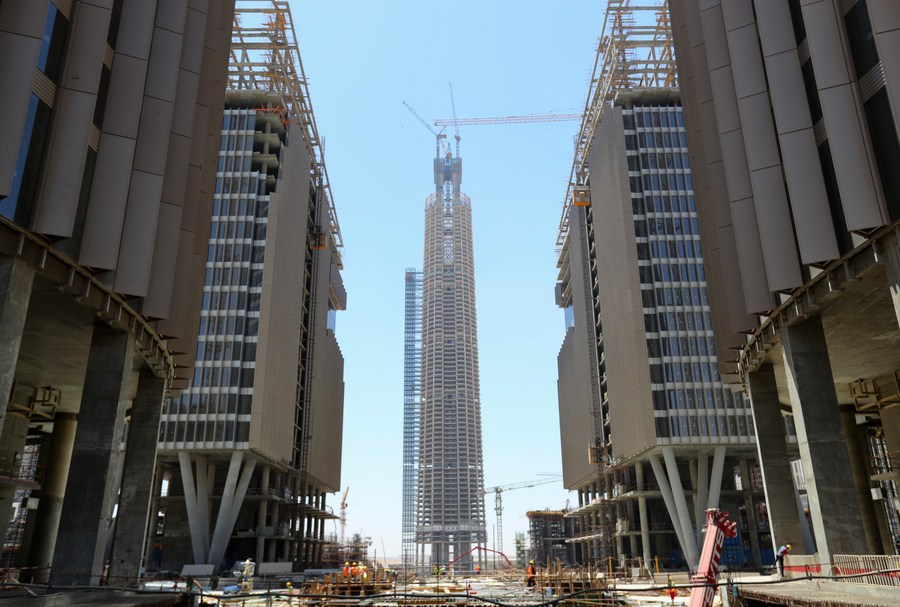 Photo taken on June 17, 2021 shows the construction site of a skyscraper in a vast business district in Egypt's new administrative capital. (Xinhua/Sui Xiankai)

Before the inspection, as the project's security manager, Liu tours the beehive-like building site. His daily routine also includes morning meetings with security staff to instruct them to guarantee the safety of workers and the implementation of precautions, and to check the increasing number of vehicles accessing the site.

A veteran of security work for nearly 20 years, Liu joined China State Construction Engineering Corporation (CSCEC) Egypt in 2019. The firm has been carrying out the 20-tower Central Business District (CBD) project, a task made even more complicated by the pandemic.

"Although it's somehow tiring, it makes us more relieved and safer in the end," the 39-year-old man from China's coastal Shandong Province told Xinhua.

Over a dozen of towers have appeared high in the sky since the project started in January 2016. Back then, Chinese President Xi Jinping held talks in Cairo with his Egyptian counterpart, Abdel-Fattah al-Sisi, and said that China was willing to participate in Egypt's key projects including the development of the Suez Canal Corridor and the construction of a new administrative capital. 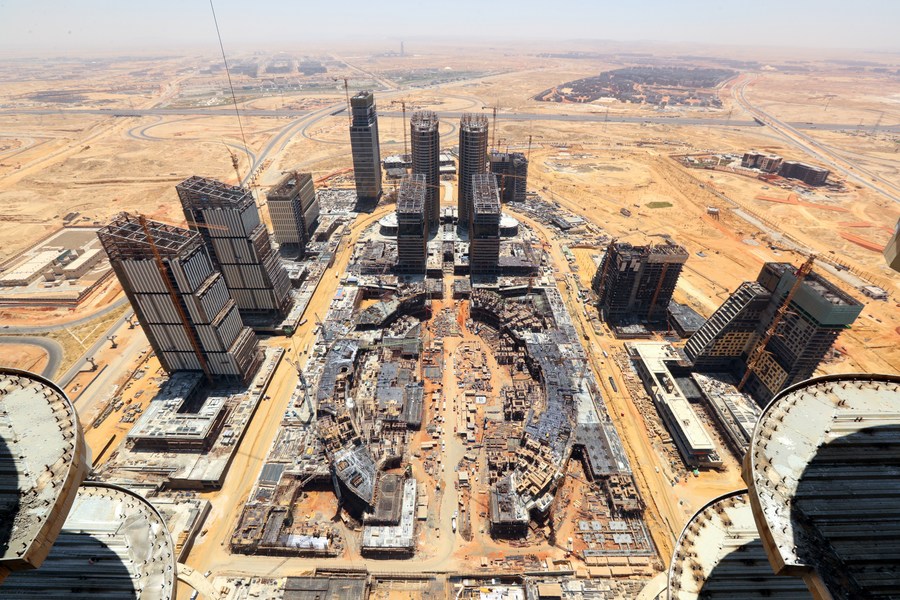 Xi also proposed in the talks that the two countries work together to build Egypt into a pivot of the Belt and Road and that China and Egypt should conjoin their development strategies and visions and focus on cooperation on infrastructure construction and production capacity.

Al-Sisi said Egypt was willing to connect its own development plans with the Belt and Road Initiative and expand infrastructure cooperation with China under the framework of the Asian Infrastructure Investment Bank.

The new administrative capital is one of the mega projects in Egypt through which the country hopes to leap towards development and modernization.

Liu remembers how colleagues' got sunburned at the early stage of the project, as they worked outdoors in blazing hot and dry days, with their food and drinking water delivered to the site from outside. 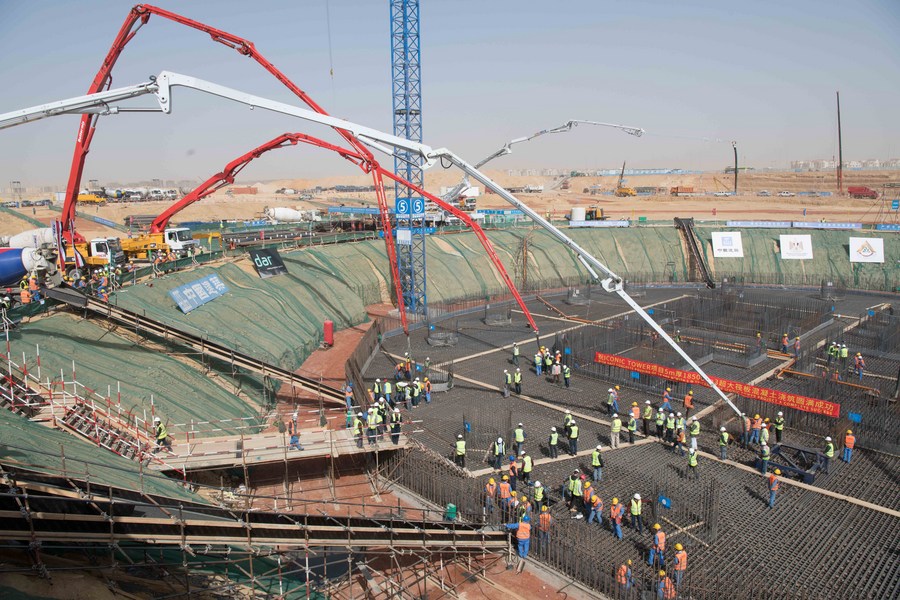 Part of the CBD project is the 385-meter-high 80-floor Iconic Tower, which will be the tallest skyscraper in Egypt and in Africa upon completion. In August, the tower's steel structure was roofed as the last beam was accurately docked.

"This project has set a number of construction records," said Wei Jianxun, general manager of the Iconic Tower project, noting that many technical problems need to be overcome to build skyscrapers in the desert area, such as preventing gradual settlement of buildings.

Waleed Salah, one of the CBD project's Egyptian engineers who was trained by Liu, is impressed by China's skyscraper construction techniques and finds his participation an opportunity to exchange expertise with and learn from his Chinese peers.

"I like the Chinese people's punctuality and dedication to professionalism," he said, noting that he respects and maintains the preventive measures against the virus.

The CBD project once had more than 9,000 Chinese and Egyptian workers living and working together. 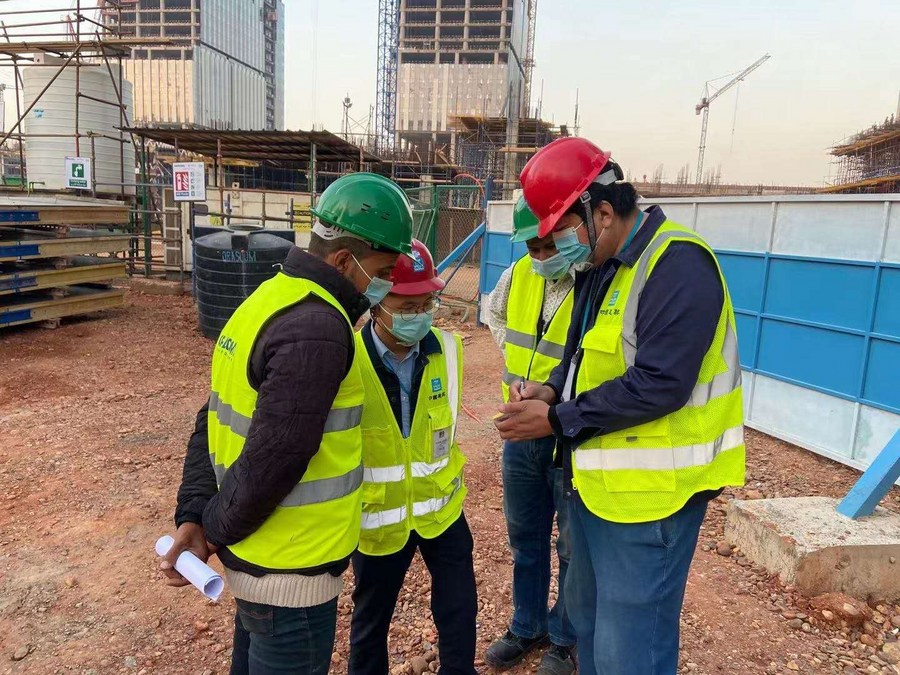 Egyptian Prime Minister Mostafa Madbouly, who visited the CBD site several times over the past couple of years, said during a visit that the architectural project was a miracle. "It's a wonderful project that will be a landmark in all Egypt and a symbol for modern Egypt."

The ongoing COVID-19 challenges did not slow the progress of the project, said Chang Weicai, general manager of CSCEC Egypt.

Al-Sisi said Egypt was willing to connect its own development plans with the Belt and Road Initiative and expand infrastructure cooperation with China under the framework of the Asian Infrastructure Investment Bank.