Abstract : China announced Saturday it would establish the Xiongan New Area in Hebei province, as part of measures to advance the coordinated development of the Beijing-Tianjin-Hebei region in 2017.

China announced on April 1, 2017 it would establish the Xiongan New Area in Hebei province, as part of measures to advance the coordinated development of the Beijing-Tianjin-Hebei region.

Aerial photo taken on May 14, 2019 shows the view of Gongzhuang Village of Bayu Township, Rongcheng County, Xiongan New Area, north China's Hebei Province. Relocation has officially started in Xiongan New Area, a new city in the making about 100 kilometers southwest of Beijing. A large-scale building phase will start this year at Xiongan, authorities said. A 13-sq-km residential area will be built in the east part of Rongcheng County. (Xinhua/Xing Guangli)

This is a further new area of national significance after the Shenzhen Special Economic Zone and the Shanghai Pudong New Area, according to a circular issued by the Communist Party of China (CPC) Central Committee and the State Council.

The New Area, about 100 km southwest of downtown Beijing, will span three counties that sit at the center of the triangular area formed by Beijing, Tianjin, and Hebei's provincial capital Shijiazhuang.

The move will help phase out functions from Beijing that are not related to the capital, explore a new model of optimized development in densely-populated areas, and restructure the urban layout in the Beijing-Tianjin-Hebei region, according to the circular. 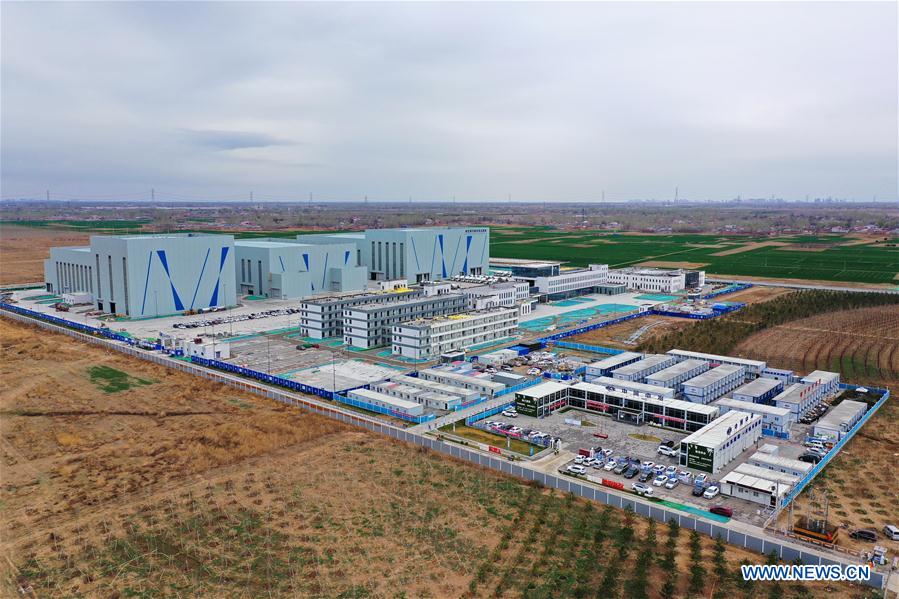 Aerial photo taken on March 26, 2020 shows a concrete stirring station at the Xiongan New Area, north China's Hebei Province. As the COVID-19 epidemic eases in China and work and production is resuming gradually, the construction of Xiongan New Area has also gained steam in an orderly manner. On April 1, 2017, China announced plans to establish Xiongan New Area, located about 100 km southwest of Beijing, with the aim of building the area -- spanning Rongcheng, Anxin and Xiongxian counties -- into a national model of high-quality development and a new engine for the modern economic system. (Xinhua/Yang Shiyao)

China's central authorities have approved the 2018-2035 master plan for Xiongan New Area, stressing that its creation is significant to high-quality development and the building of the modern economic system in April 2018.

The plan was approved by the Central Committee of the Communist Party of China (CPC) and the State Council.

The 2018-2035 master plan for Xiongan New Area is significant to build Xiongan into the national model of high-quality development and a new engine for the modern economic system, said the approval released on Wednesday.

The master plan is the fundamental guideline for the development, construction and management of the Xiongan New Area and should be strictly implemented, according to the approval.

The plan also lists overall development goals for the new area. By 2035, Xiongan will basically develop into a modern city that is green, intelligent and livable, with relatively strong competitiveness and harmonious human-environment interaction. The planning scope of Xiong'an New Area involves Hebei's Xiongxian, Rongcheng and Anxin counties and part of their surrounding area. This new area will cover about 100 sq.km initially, and will be expanded to about 200 sq.km in the mid-term and about 2,000 sq.km in the long run.

Xiongan sits at the center of a triangular area with Beijing, Tianjin, and Hebei's capital Shijiazhuang at the apexes.

With good road and rail access, Xiongan commuters will be able reach any of the three cities in about 30 minutes, The site is only 55 km from Beijing's new airport.

The Xiongan New Area is situated in a mid-latitude zone, and has a warm-temperate, monsoon-type continental climate. There are four distinct seasons, with an average annual temperature of 11.7°C. During the hottest month (July), the average temperature is 26°C. During the coldest month (January), the average temperature is -4.9°C. The Xiongan New Area has 2,685 total hours of annual sunshine and an average annual rainfall of 551.5mm, of which June to September accounts for 80 percent. The frost-free period lasts for about 185 days.

The document says that priority shall go to ecological protection with the new area pursuing green development. With the total area of construction land set at about 530 square kilometers, Xiongan will strictly control land use and cap its land development intensity at 30 percent.

About 10 percent of the new area's land will be put under permanent protection as basic farmland, while the population density will be no more than 10,000 people per square kilometer.

2. Shaping the city landscape for a new era

Archaeological parks, museums of ancient ruins and exhibition halls will be erected, and the protection of historic cities and villages will be integrated into city construction.

The document says that ecological restoration work will be started in Baiyangdian Lake, including restoring the lake's area to 360 square kilometers. Meanwhile, water pollution will be treated while the forest coverage rate will rise from 11 percent to 40 percent.

Moreover, a negative list will be implemented to close down and ward off high-pollution and energy-intensive production. In the long term, Baiyangdian National Park will be established.

The document says the new area will be at the forefront of cutting-edge technology, map out tech industries at a high starting point, and push for coordinated development of the real economy, technological innovation, finance and human resources.

Major industries to thrive in the area will include information, biotechnology, new materials, modern services, and green agriculture.

Xiongan will strive to build first-class technology and innovation platforms in the world, with best research universities to foster talents and innovative policies and mechanisms to serve growth tech firms.

The new area will provide quality public facilities and services to its dwellers and form a diversified housing system. As a livable and business-friendly city, it will put property developments under strict control and establish a long-term mechanism to prevent speculation in the real estate market.

Xiongan plans to build a fast and highly-efficient transportation network. By high-speed railway, it will take only 20 minutes to travel from Xiongan to Beijing's planned new airport in Daxing district, 30 minutes to Beijing and Tianjin, and an hour to Shijiazhuang, capital of Hebei province.

In Xiongan, a green and low-carbon way of production, living, as well as building and administering the area will be promoted. For instance, advanced environmental-friendly and energy-saving materials and techniques will be widely used in the construction of the new area.

The plan also stresses building Xiongan into a digital city. The new area will step up the construction of intelligent infrastructure, and set up a smart mode of city administration and a management system for data asset.

A modernized city security system will be established in Xiongan, with complete high-standard disaster-preventing and disaster-alleviating facilities, so that the new area can quickly respond to disasters and emergencies and develop safe and sound.

9. Ensuring orderly and effective implementation of the plan

Xiongan New Area is historical heritage for future generations. The country should be patient, and stick to this plan with a big view of history. Planning system should be improved, as well as related policy regulations and technical rules.

China beefs up efforts to expand new type of consumption

China announced Saturday it would establish the Xiongan New Area in Hebei province, as part of measures to advance the coordinated development of the Beijing-Tianjin-Hebei region in 2017.