Abstract : Some halted housing projects in China have resumed construction as local governments and financial firms are helping out real estate developers with liquidity-activating solutions. 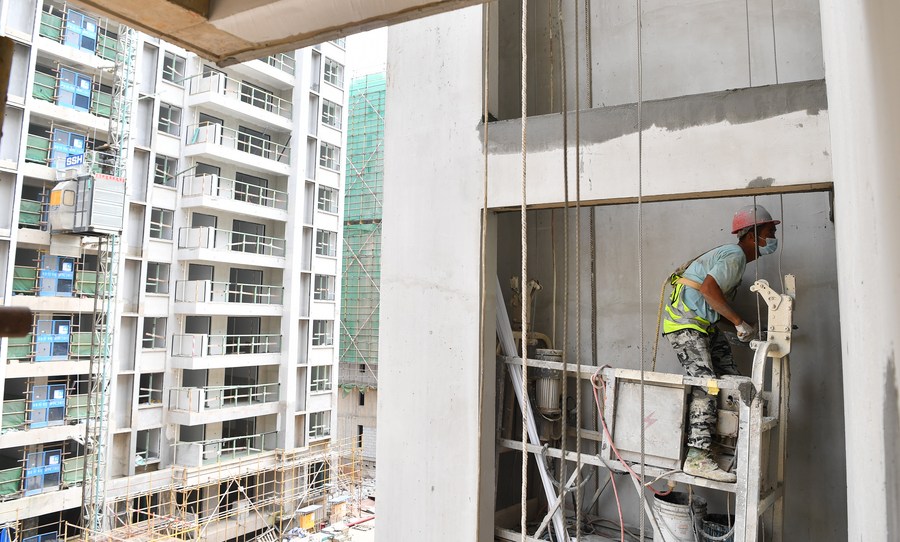 In Zhengzhou, capital of central China's Henan Province, a relief fund with its capital size temporarily set at 10 billion yuan (about 1.41 billion U.S. dollars) has been launched, targeting only existing real estate projects whose investment can be covered by future sales revenue.

Moreover, the capital support will go to only four types of operation, namely local shantytown renovation with the loans and repayments subject to a government-designated financing firm, mergers and acquisitions, bankruptcy reorganization and rental housing for low-income households.

China Construction Bank launched a fund of 30 billion yuan as a pilot project to back up the purchases of problematic real estate projects for conversion to public rental housing in central China's Hubei Province.

Along with local government support come the remedies from asset-management companies who have either clinched or are negotiating bailout deals with real estate developers.

China Great Wall Asset Management Co., Ltd., one of the country's biggest distressed debt managers, has gone through rounds of discussions and in-depth analysis of prospective projects with 12 property developers. Some of the construction projects have been granted capital support and have resumed construction.

Property developer China Evergrande Group has signed contracts with several trust companies successively, agreeing to divest some of its property projects in exchange for capital injection, according to a report released by property research institution CRIC.

Apart from providing bailout solutions, local governments also came up with supporting measures based on local conditions. In southwest China's Chongqing Municipality, for instance, working groups have been set up to dissolve risks of halted property projects, and specialists are entrusted to follow up on the construction progress and conduct full-course fund management.

Thanks to concerted efforts by real estate firms, local governments and other relevant parties, positive progress has been made in different localities, but financial pressure remains, industry analysts said.

Cao Zhounan, CEO of Smart City Smile City, an asset management company, said most of the problematic projects were thirsty for start-up capital.

The company, together with other financial institutions, has established a 1.8-billion-yuan relief fund to facilitate the restarting of housing construction projects, he said.

"Situations vary with properties, and that's why it's really complicated on the ground and why we suggest a differentiated approach to tackling the woes of each project," said Ding Zuyu, CEO of real estate service company E-House.

Ding said that immediate liquidity injection into difficult projects was the top priority, as project recovery relied on start-up capital.

"Although some developers are facing cash strains, their assets are still in place and they are not insolvent," Cao said.

To ensure the healthy development of the real estate sector, the central government has been emphasizing a rule-based and market-oriented approach and the principle of "houses are for living in, not for speculation."

It has required property developers to shoulder their main responsibility and local governments to fulfil their duties so as to protect the legitimate rights and interests of home buyers.

At a high-level meeting held in late July, Chinese leadership urged local governments to take due responsibility to ensure timely delivery of pre-sale housing and maintain the stability of people's living standards.

In August, the Ministry of Housing and Urban-Rural Development, together with the country's finance ministry and central bank, announced efforts to support stalled construction projects by offering special loans through policy banks.

Some halted housing projects in China have resumed construction as local governments and financial firms are helping out real estate developers with liquidity-activating solutions.