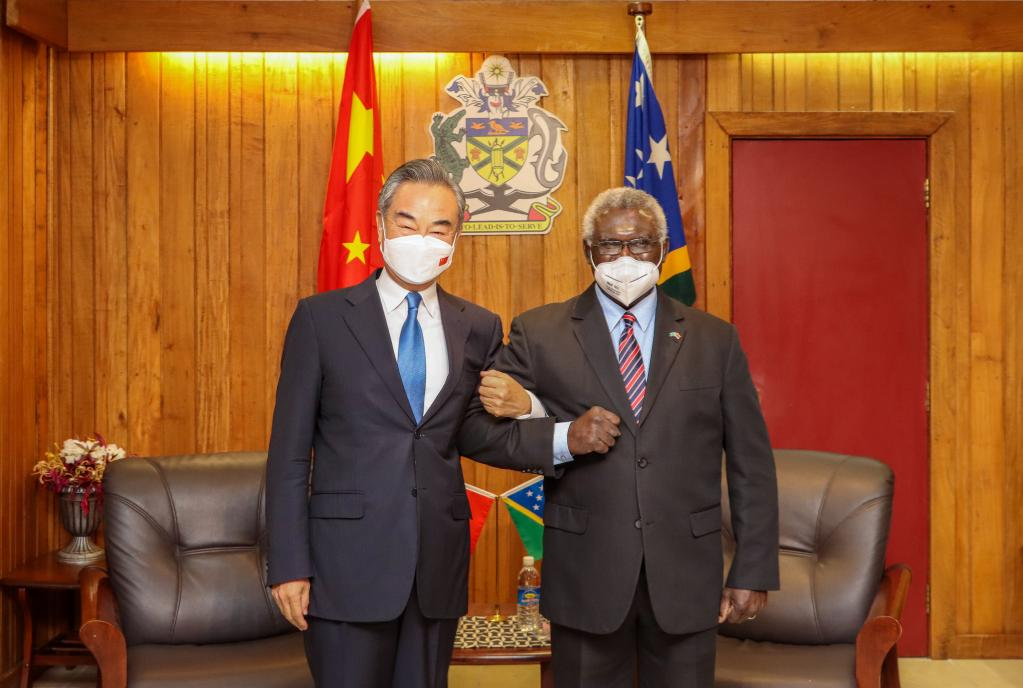 Sogavare said China has become the biggest cooperative partner of the Solomon Islands on basic infrastructure and a reliable development partner, expressing thanks to China for providing anti-pandemic supplies, repid-test equipment and sending medical teams to his country.

He also appreciated the Chinese side for sending policing supplies and police advisers to help maintain social order of the Solomon Islands after the riot in Honiara.

The Solomon Islands and China have conducted cooperation on the basis of equal treatment and mutual respect, and the connection in various fields has become increasingly close, bringing tangible benefits to the Solomon Islands people, the prime minister noted.

For his part, Wang said the Chinese side appreciates the Solomon Islands' firm determination of safeguarding national interests, strong desire of developing China-Solomon Islands friendly cooperation and adhering to the one-China policy. China also staunchly backs the Solomon Islands' efforts to safeguard natioanl sovereignty independence, protect natioanl unity and solidarity, and speed up the realization of natioanl prosperity on a path chosen by the country.

Wang said it's not long since the establishment of diplomatic relations between the two countries but the development of bilateral ties has been sound, steady and fast.

China and the Solomon Islands have become good friends of mutual trust and good partners of mutual support, with political trust between the two countries further deepening and pragmatic cooperation widening, he noted.

China is ready to work with the Solomon Islands to forge "iron-clad" ties, and deepen cooperation between the two sides so as to benefit the two peoples, Wang said.

The emerging economies are rising en masse, and peace and development are still the irreversible trend of the times despite the unilateral bullying, Wang noted.

China is ready to enhance coordination and cooperation with the Solomon Islands in multilateral organizations such as the United Nations to accelerate the UN 2030 Agenda for Sustainable Development, cope with climate change, and jointly safeguard the rightful interests of medium and small countries.

Sogavare also said the Solomon Islands is willing to strengthen communication and coordination with China on international issues.

Wang is visiting the Solomon Islands as part of his tour to the South Pacific island nations, which will also take him to Kiribati, Samoa, Fiji, Tonga, Vanuatu and Papua New Guinea, as well as Timor-Leste.