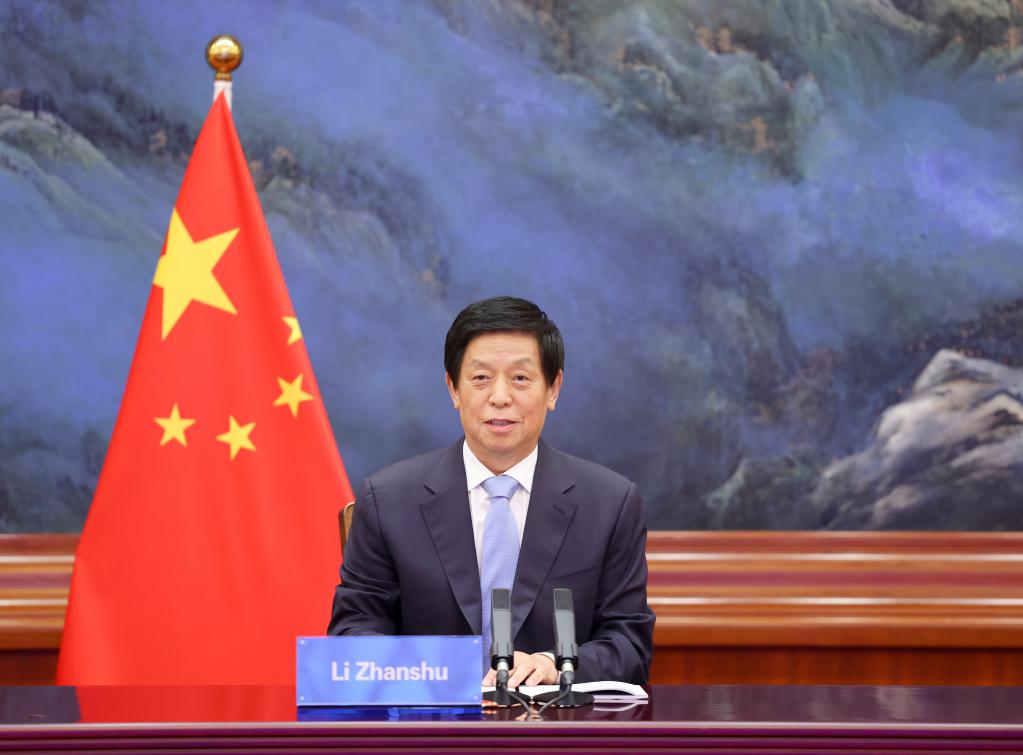 Li Zhanshu, chairman of the National People's Congress (NPC) Standing Committee, holds talks with Saqr Ghubash, speaker of the Federal National Council of the United Arab Emirates (UAE), via video link at the Great Hall of the People in Beijing, capital of China, July 7, 2021. (Xinhua/Ding Haitao)

Li, chairman of the National People's Congress (NPC) Standing Committee, said China and the UAE, as good friends and good partners, have made every effort to promote bilateral relations, with the deepening of political mutual trust, fruitful results on economic and trade cooperation, and closer people-to-people exchanges. Cooperation in the fight against COVID-19 pandemic has become a new highlight of bilateral relations, he added.

Li said the construction of the comprehensive strategic partnership between China and the UAE has made substantial and significant progress, which not only benefits the two countries and their peoples, but also establishes a model of mutual respect, mutual benefit and win-win cooperation between China and the Arab and Islamic countries.

Li noted that, in accordance with the important consensus reached by the top leaders of the two countries, China and the UAE should continuously enhance strategic communication as well as the synergy of the Belt and Road Initiative (BRI) and the UAE's 50-year national development plan. The two sides should strengthen mutual political support, firmly support each other's core interests and major concerns, jointly safeguard the purposes and principles of the UN Charter and the basic norms of international relations, and jointly safeguard the fundamental and long-term interests of developing countries.

He called on the two sides to carry out anti-epidemic cooperation, promote vaccine cooperation to benefit more countries, and deepen practical cooperation in other fields.

Li stressed that the NPC attaches great importance to strengthening exchanges and cooperation with the Federal National Council of the UAE, and hopes that the two sides will further promote friendly cooperation between the two countries in various fields.

He called on both sides to timely approve and revise legal documents that are conducive to the development of bilateral relations so as to provide legal guarantees for cooperation in BRI and other fields.

Saqr Ghubash expressed thanks to China for providing important support to its fight against the pandemic, saying that the Federal National Council of the UAE stands ready to deepen friendly exchanges with the NPC and make positive contributions to promoting bilateral relations, advancing pragmatic cooperation and enhancing the friendship between the two peoples. Enditem