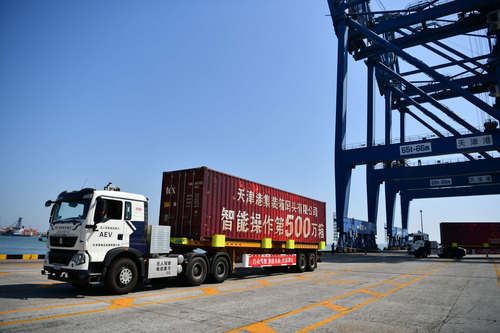 The driverless electric container truck loaded with containers heads for the dock at the Tianjin Port in north China's Tianjin, Sept. 26, 2019. (Xinhua/Li Ran)

Operating directly between Tianjin and the southeastern countries, the new shipping route is jointly carried by four ships with capacity of 2,500 to 2,700 TEUs under five shipping operators in Tianjin, which is shipping with weekly schedule.

In 2020, China's total import and export trade volume reached 32.16 billion yuan, an increase of 1.9 percent year on year. Among them, the Southeast Asian Nations (ASEAN) has become the largest trading partner of China by realizing a 4.74 trillion yuan of foreign trade volume.

With tighthened economic ties between China and ASEAN countries, enterprises in Beijing, Tianjin, Hebei and other places have closer trade cooperation with ASEAN countries in various fields, accompanied by broad shipping demand.

It is noted that Tianjin Port has formed a cost-effective and convenient sea-rail intermodal transport network, which not only serves domestic and international economic development, but also promotes economic and trade cooperation between the Beijing-Tianjin-Hebei region and ASEAN countries.