Abstract : The Baltic Exchange has published its weekly report of the dry and tanker markets for June 8-12, 2020.

BEIJING, June 13 (Xinhua) -- The Baltic Exchange has published its weekly report of the dry and tanker markets for June 8-12, 2020 as below:

The Capesize market made new highs for the year this week after strong iron ore demand to the far east continued to develop in the market. Earnings have lifted from sub operating cost levels under two weeks ago, to now having surged up to have the Capesize 5TC settling at $12,410. Long tonne mile cargoes coming from all regions of the Atlantic have looked to fill the void left in supply by sluggish Brazilian offerings. While Vale may have dialed down on output year to date, they were active in the market this week on Brazil to China activity. Voyage route C3 now sits at $14.91 and the Brazil to China timecharter C14 posts at $13,936. In the Pacific, all major iron ore charterers have been busy. Owners trading options have been increasingly plentiful for one of the first times this year so bid offer spreads have been widened, leading to some periods of inactive waiting for one side to blink. The West Australia to China C5 lifted from  $5.473 on Monday to close out this week at $6.486.

The Panamax market witnessed a substantial recovery this week, despite a lethargic week of activity in Asia and a complex market to call in the Atlantic - at least until midweek when the EC South America market exploded into action.  Levels for Australian and NoPac round trips this week hovered around the mid $7,000's mark for Kamsarmax tonnage, whilst Post panamax tonnage were commanding a small premium to this with active demand for the larger sized unit. South America, the main driving force in the market, came to the fore with most of the grain houses placing tonnage for end June and July load arrivals - with the headline rate of $11,000 being agreed a few times for Kamsarmax tonnage delivery Singapore. With FFA values gaining values over the week for both spot and further out months, some period activity this week included a Kamsarmax achieving $10,250 for one year’s employment.

A positive week across most areas for the sector with stronger demand from the US Gulf and sustained demand from the Indian Ocean even drawing vessels from south east Asia. Period activity returned a 63,000dwt open South Korea covering five to seven months trading redelivery worldwide at $11,000. Owners had the upper hand from the US Gulf with the demand for prompt tonnage, a 63,000dwt fixing from here for a trip to Thailand at $15,500. From east coast south America demand and supply ratio remained balanced. From the Indian Ocean activity levels remained strong. A 63,400-dfwt open Mombasa covering a trip via South Africa redelivery Pakistan at $12,000 plus $200,000 ballast bonus. Indonesian coal was still in demand. A 52,000dwt fixing delivery CJK for a round voyage via Indonesia at $6,250. For Pacific round voyage again better levels were seen, a 60,200dwt fixing at $8,250 for a trip delivery Busan via north Pacific redelivery Chittagong.

More activity was reported from east coast South America this week with rates further climbing. A 36,000dwt was fixed from south Brazil for a trip to ARAG range at $7,500 early in the week, and later a 37,000dwt open in the same area was fixed in the $7,000s for a trip to the Baltic. Recovery signs were also reported from the US Gulf whilst the market was waiting for business to be concluded that would set a new benchmark. Otherwise, a 35,000dwt open Iskenderun was fixed for a fronthaul trip at $10,000. A 32,000dwt delivery north France was booked for a trip to west Mediterranean with grains at $4,500. In the Pacific, rates remained firm with cargoes in the Far East building up. A 28,000 open south Vietnam was fixed for a trip via east coast India to China at $5,000. Mid-sized vessels delivery in Australia were fixed at $8,750 for a trip to Southeast Asia and $9,000 for a trip to China.

The one area offering owners small crumbs of comfort was on the LR2s in the Middle East Gulf where rates for 75,000mt to Japan are now assessed over 15 points higher in the low WS90s. Increased activity going west has thinned the tonnage list, enabling owners to recover some lost ground recently. However, in the 55,000mt trade to Japan, rates have fallen over 10 points to sit now at barely WS70, with charterers having plenty of choice. It was a miserable week for owners plying the 37,000mt UKC to USAC trade with the market easing to WS95, down just over 25 points from a week ago. The same negative sentiment was to the fore in the 38,000mt backhaul trade from US Gulf to UKC with the market down 10 points at WS82.25 region and brokers feel there is potential for further softening. The 30,000mt clean cross-Med trade came under renewed downward pressure. And, after starting the week in the low WS120s, now sits at close to WS105 level.

Another quiet week for the spot market in the Atlantic and Middle East, with owners unable to make much headway on rates. In the Middle East, rates for 270,000mt to China have bounced around WS60 level - up from last week's WS57.5. Rates for 280,000mt to USG via cape/cape routing, meanwhile, have been assessed as steady at WS32.5. In West Africa, a few fixtures have been concluded with rates remaining around WS59 for 260,000mt to China. Yet again, there has been little reported activity from the Gulf of Mexico, and rates are now being assessed at $7.55m for 270,000mt USG/China voyages, $50k lower than a week ago.

Rates in this sector remain soft this week, with rates for 130,000mt Nigeria/UKCont falling four points to WS50 and facing further downward pressure. The 135,000mt Black Sea/Med rates fell 10 points to WS50. In the Middle East market, rates have remained flat at WS25. 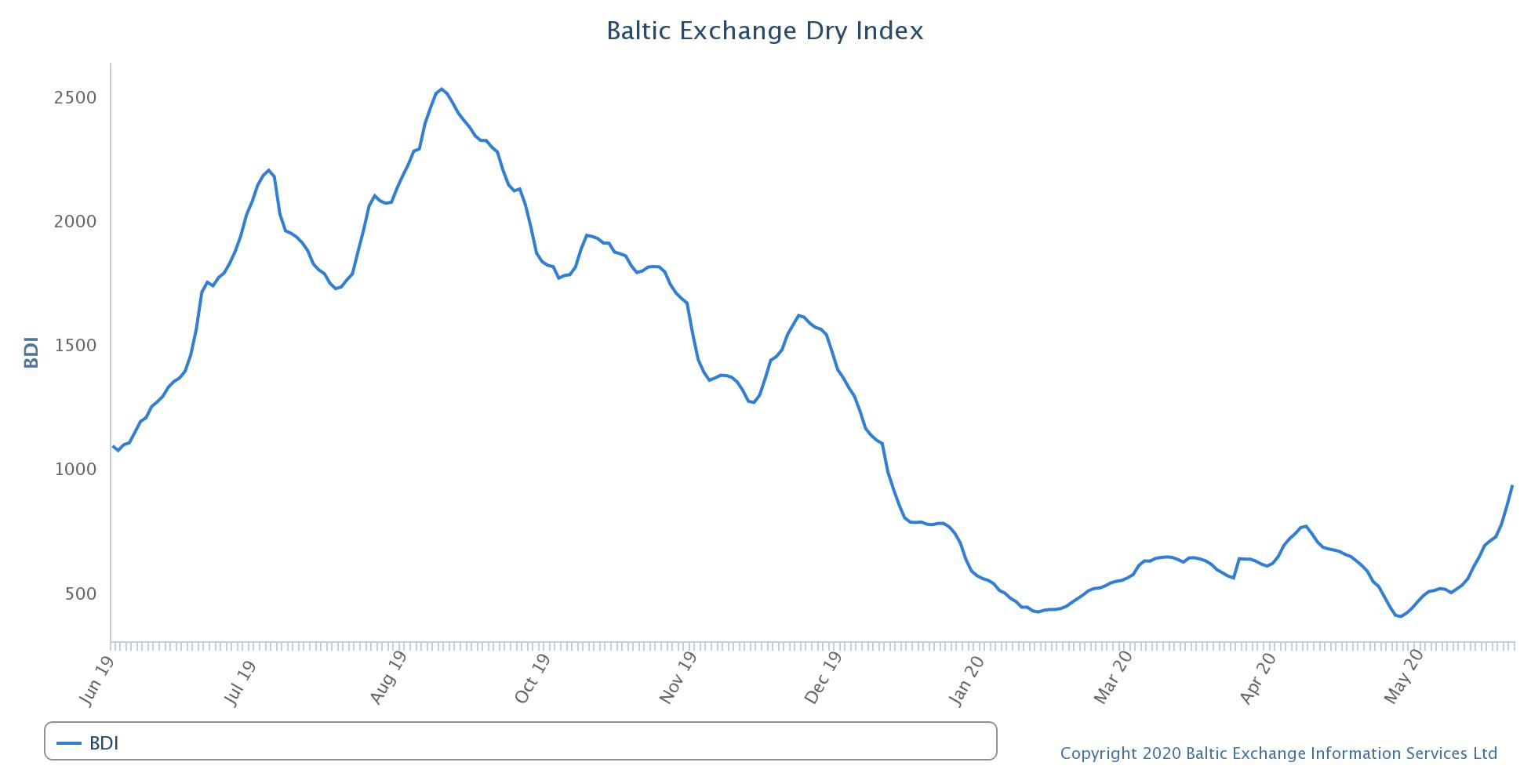 The Baltic Exchange has published its weekly report of the dry and tanker markets for June 8-12, 2020.