Abstract : The world will never be the same as people drew lessons and inspiration from searching for a way out. Attacked by a common enemy, countries are now well aware of the power of solidarity and cooperation.

- On January 30, 2020, when the WHO declared the COVID-19 outbreak a public health emergency of international concern, many people might not have expected it to turn into the worst public health crisis in a century.

- One hundred days on from sirens wailing, some 3.7 million people have been infected by the virus, and over 260,000 lost their lives.

- Under the global impact of the COVID-19 pandemic, many countries saw their health systems overstretched, economies forced into standstills, human contacts reduced and social governance questioned.

- Searching for a way out of the crisis underlines the importance of building a community with a shared future for mankind.

GENEVA, May 8 (Xinhua) -- When the World Health Organization (WHO) declared the COVID-19 outbreak a public health emergency of international concern on Jan. 30, many might not have expected it to turn into the worst public health crisis in a century.

One hundred days on, some 3.7 million people were infected by the virus, with over 260,000 lives lost. Many countries saw their health systems overstretched, economies forced into a standstill, contacts between people blocked, and social governance questioned.

Tables and chairs are seen outside a closed restaurant in Berlin, capital of Germany, March 22, 2020. (Photo by Binh Truong/Xinhua)

The world will never be the same as people drew lessons and inspiration from searching for a way out. Attacked by a common enemy, countries are now well aware of the power of solidarity and cooperation.

As the coronavirus cases grew exponentially, the United States, in just six weeks, reported more COVID-19 fatalities than those killed in the Vietnam War. In Italy's epidemic hotspot town, Bergamo, obituaries once filled dozens of pages in the local daily.

Hospitals were overstretched, facing a great shortage of protective gears, testing kits, medicines and ventilators. Some countries banned the export of medical supplies, and some even seized other countries' goods in transit.

Shops and factories closed, jobs were lost, consumption plunged, economic activities suspended, and global industrial chains were disrupted as the pandemic battered economy. The United States even saw its stock market melt down and oil futures be dumped negative. 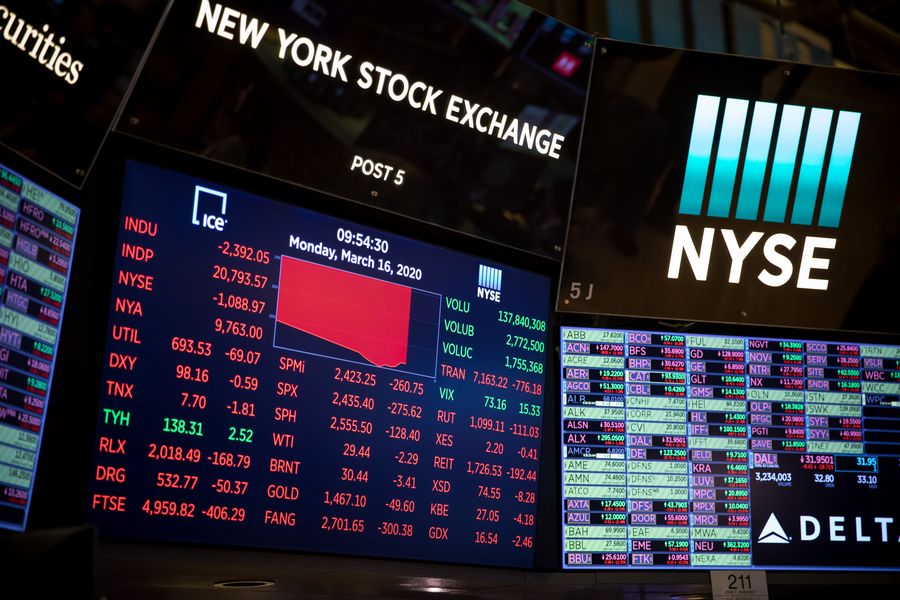 The International Monetary Fund (IMF) said the global recession is already there for 2020. The World Trade Organization (WTO) warned that world merchandise trade is set to plummet by between 13 and 32 percent this year and could bear comparison with the Great Depression of the 1930s.

The virus also marked the end of handshakes and hugs. People are urged to observe social distancing to help prevent the virus.

Many countries declared a state of emergency and adopted "wartime" measures. However, the effectiveness of prevention and control measures were undermined by partisan disputes, rumors and a lack of trust.

A certain country attempted to shift blame for its botched coronavirus response efforts and make other countries easy scapegoats. Having been caught in a whirlpool of "malicious accusations," the WHO, coordinator of this global fight, saw part of its funding frozen.

A worker disinfects a train at a subway station in the Brooklyn borough of New York City, the United States, May 6, 2020. (Photo by Michael Nagle/Xinhua)

While a vaccine solution is still not in sight, the virus' spread remains largely uncertain. The world needs to tackle the challenges of the century.

The first hard choice is between life and livelihood.

Many countries have banned non-essential businesses and restricted people's movement. But these measures severely suppressed production and consumption, heightened the risk of bankruptcy and job losses, and forced a hard-living upon people.

Some 25 million people would lose jobs because of the pandemic, data from the International Labor Organization showed. Despite the risk of a second epidemic wave, many countries have announced plans to ease lockdown in a bid to restart the economy. 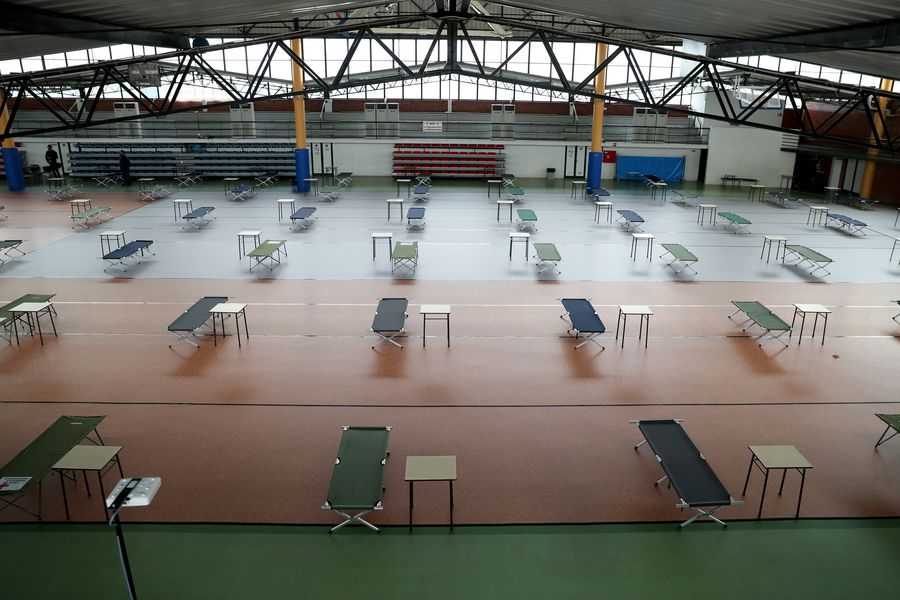 A makeshift field hospital is placed at the University Stadium in Lisbon, Portugal. (Photo by Pedro Fiuza/Xinhua)

The WHO has stressed the necessity to rapidly test, track and isolate every possible infection case and its contacts to cut off the chain of transmission. However, governments face the dilemma between sanitary security and people's privacy.

In Liechtenstein, part of its 40,000 people started to wear "biological bracelets" to have body temperature, heart rate and other data monitored in real-time so as to track potential infection. In its roadmap for deconfinement, the European Union stressed that the development and use of social tracking tools must proceed with full respect of privacy. 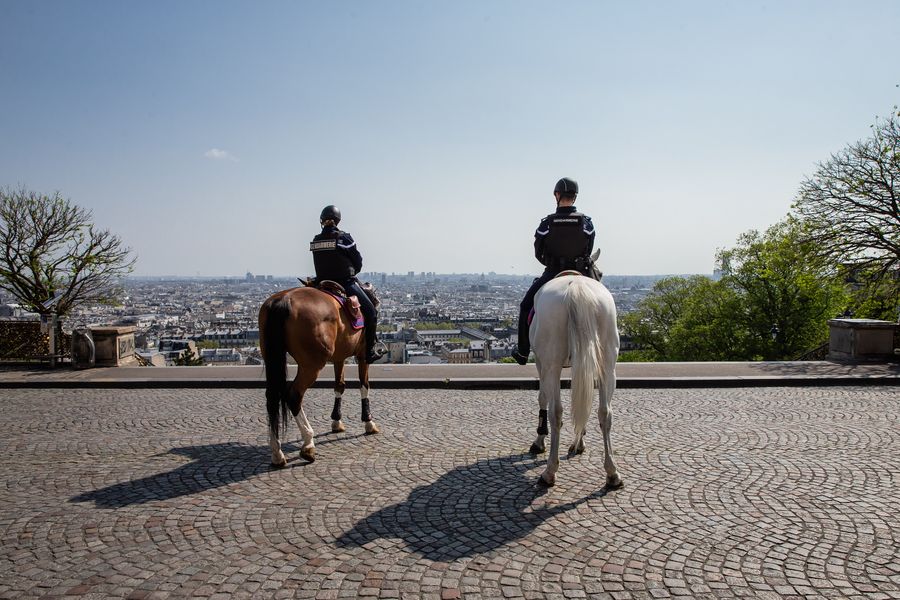 Panicked by the epidemic, some countries backtracked to the "zero-sum game" with emphasis on "national priority." The latest WTO data showed that 80 countries and regions have imposed trade restrictions on medical materials and daily necessities.

Certain countries' ban on the export of medical supplies has hampered the production of Hamilton Medical in Switzerland, one of the world's largest manufacturers of ventilators. Restrictions on grain export by countries also triggered concerns over the security of global food supply.

Ren Minghui, assistant director-general for Universal Health Coverage/Communicable and Noncommunicable Diseases of the World Health Organization, has repeatedly called for a smooth trans-border flow of key resources to guarantee the "lifeline" in the fight against epidemics.

People practice social distancing as they wait outside a supermarket in Washington, the United States, April 3, 2020. (Photo by Ting Shen/Xinhua)

In every crisis lies an opportunity. At a time when the health system, economic order and governance capacity are challenged, searching for a way out of the crisis underlines the importance of building a community with a shared future for mankind. After 100 days since the alarm of a pandemic was sounded, new opportunities for solutions came in sight.

First of all, the concept of a community with a shared future for mankind is going deeper in people's minds.

The coronavirus pandemic knows no borders and recognizes no races. As United Nations Secretary-General Antonio Guterres emphasized, "We face a crisis unlike any other. To overcome it, we must unite."

Following its outbreak, China published the virus gene sequence, winning time for the rapid development of testing tools; medical supplies were shipped to wherever needed and medical teams were sent to the countries in need; researcher worked together in the WHO's "Unity Experiment;" musicians from across the world held an online concert, raising over 100 million U.S. dollars for the fight against COVID-19 ...

The use of digital technology will also speed up. 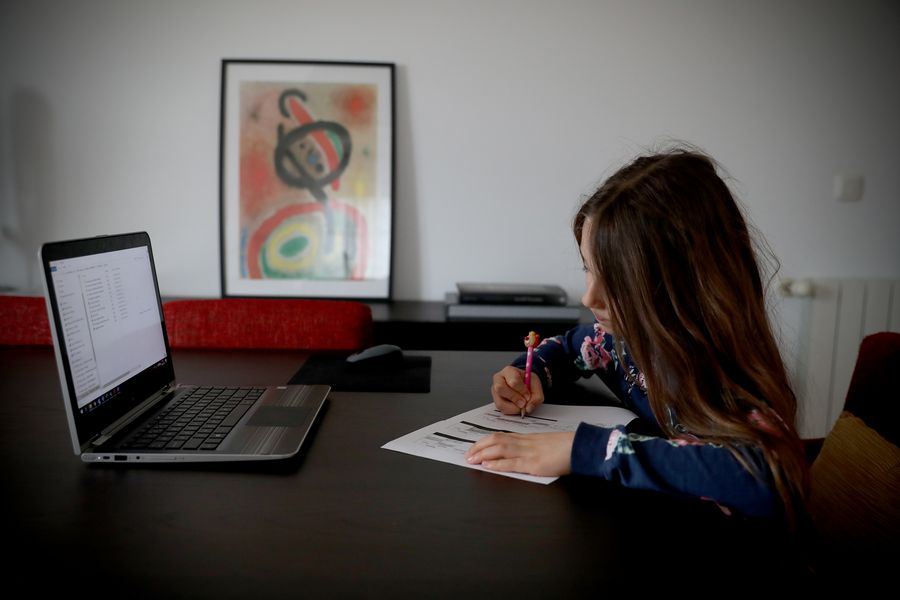 A student takes online classes as the schools remain closed amid the fight against the COVID-19 outbreak in Cascais, Portugal, April 14, 2020. (Photo by Pedro Fiuza/Xinhua)

"We saw two years of digital transformation in two months," said Microsoft CEO Satya Nadella. All of these are gaining momentum for the development of digital technology.

Another inspiration is that globalization needs to be more resilient.

The pandemic triggered reflections on risk management in industrial chains, which will push globalization towards a more resilient orientation. As WTO Director-General Roberto Azevedo said, no matter how powerful and advanced a country is, it cannot be completely self-sufficient.

It is unrealistic for countries to build up an inward-looking industrial structure. Rather than concentrating all types of production within one country, multinational companies will survive better with multiplied supply chains.

A more resilient globalization will be more sustainable. When humans reduce activities and movements, they have more time to reflect on how to live in harmony with nature.

Fallow deer rest on the lawn at a residential area during the nationwide lockdown in east London, Britain, April 8, 2020. (Xinhua/Han Yan)

Besides, multilateral governance is proven to be more important than ever.

The WHO plays a key role in leading and coordinating the global fight against COVID-19 by monitoring the epidemic closely, issuing public health guidance, working with medical suppliers to enhance production capacity and speeding up a hunt for and fair distribution of drugs and vaccines. The multilateral governance mechanism is indispensable in responding to global crises.

Just like the 2008 financial crisis giving birth to the leaders' summit of the Group of 20, the pandemic promoted cooperation among international organizations in many fields.

With the IMF and the World Bank, the WHO discussed how to assist Africa and other regions with vulnerable public health systems. With the WTO, it ensured that products and services can flow across borders to stem the epidemic. With the UN Food and Agriculture Organization, it worked to prevent the impact of anti-epidemic measures on the food supply. With the World Organization for Animal Health, it pooled efforts to identify the animal origin of the coronavirus.

Amid a pandemic that rattles the world, a more elaborated and inclusive multilateral governance framework is forthcoming.

Jurin: Unsealing of some industries should ensure public health and economic development

China's auto consumption expected to see positive growth in May

The world will never be the same as people drew lessons and inspiration from searching for a way out. Attacked by a common enemy, countries are now well aware of the power of solidarity and cooperation.