Abstract : Jing’an sits at the heart of Shanghai. It represents the essence of the history and culture of the city, home to century-old buildings, big-name attractions, glitzy retail malls and charming art galleries. 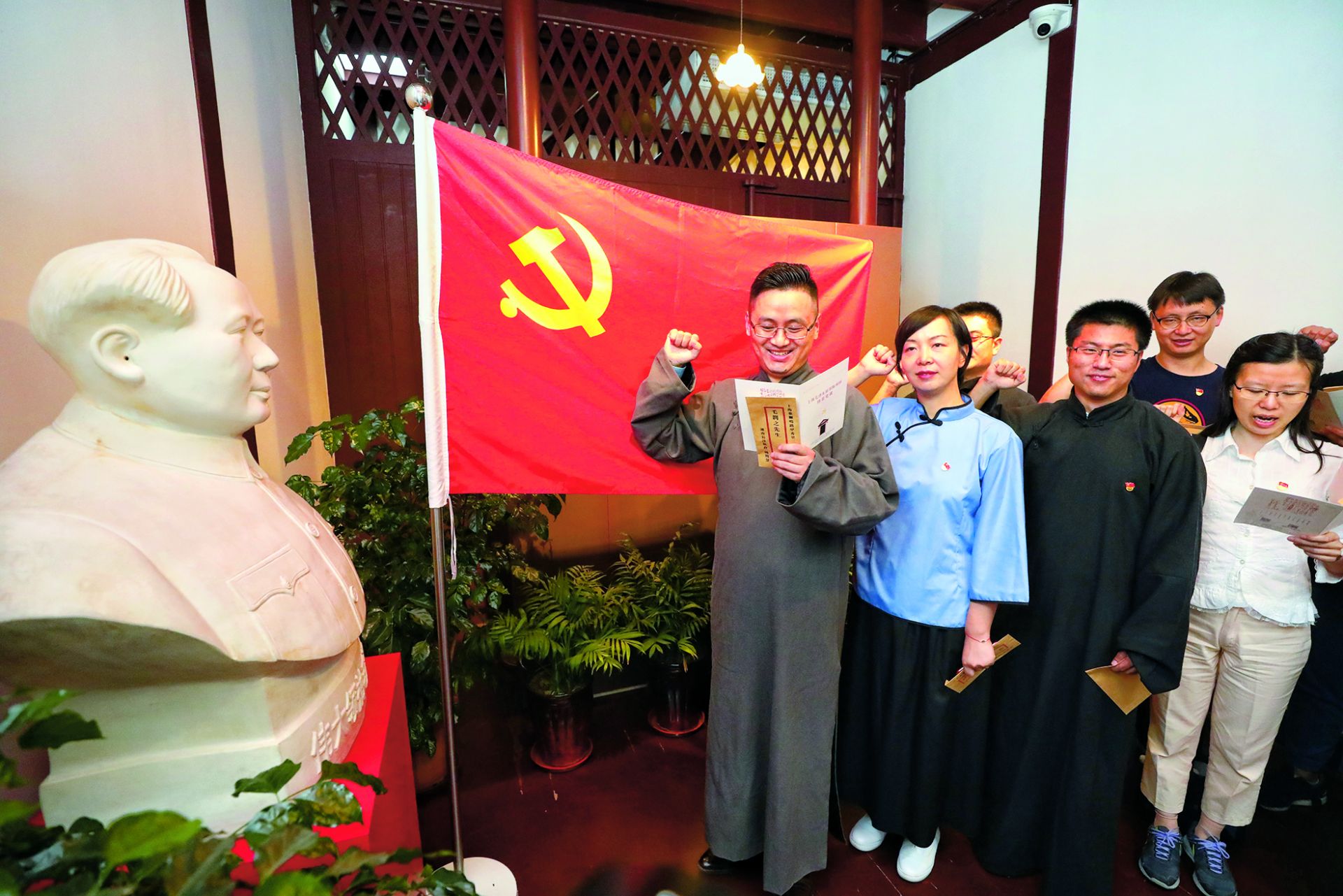 Jing’an sits at the heart of Shanghai. It represents the essence of the history and culture of the city, home to century-old buildings, big-name attractions, glitzy retail malls and charming art galleries. Annual music and art events give the district a distinctive ambience. In this series, we showcase the highlights of Jing’an.

An interactive event celebrating the 98th anniversary of the founding of the Communist Party of China was presented in the Shanghai building where former Chairman Mao Zedong spent his longest time in the city.

Men wearing the traditional long gowns of the 1920s-30s and women dressed in school uniforms recreated scenes from the Party’s early days at the former residence, a two-story house at 120 Maoming Road N.

Mao spent June-December in 1924 there, living with his family on the first floor. Figures of Mao, his wife Yang Kaihui and their sons Mao Anying and Mao Anqing are set in scenes in the house, such as Mao working at his desk and Yang taking care of the boys in a bedroom.

Performers played early Party members, reading books and discussing the Party development in the July 1 presentation. Visitors to the event received letters with different contents, and one letter contained clues leading to a “comrade.” One of the visitors, Ge Junjun, was lucky enough to be the one to receive that letter and successfully found her "comrade."

Mao was also a son, husband and father, and the play shows his sacrifices for Party and country, according to Wu Qing, who works at the site, now a memorial to Mao.

Wu showed a photograph of Yang and her two sons to visitors.

“It is the only family photo, but Mao wasn’t in the photo and Yang seemed unhappy,” Wu said. “Actually, Mao was with them when the photo was taken, but he couldn’t join in because of Party security rules.”

Visitors read copies of a letter written by Yang to Mao, which Mao never had the chance to read.

“In 1927, the Kuomingtang regime was launching a nationwide campaign to arrest Party members, and Mao was on the wanted list,” said Wu. “So, he had to leave home. Yang missed him but could have no contact with him. So, she kept a diary and wrote letters to Mao, hiding them all in a crack of her bedroom wall in her home in Hunan Province.”

During renovation work on her former residence in 1982, workers found 12 manuscripts in the crack. They were written by Yang between 1927 and 1930. Yang was arrested in October 1930 and killed the following month at the age of 29.

Jerry-built additions were torn down and a tangle of electrical wires removed. The façade was restored based on historical photos and original drawings. Traditional shikumen elements like wood shutters and carved stone lintels were also restored.

Anyone who wants to take part in the interactive play can dial 6272-3656 to make a booking.

The Jing’an District has 99 “red” revolutionary sites, and six of them relate to the founding of the Party, including Mao’s former residence and a museum of the Party’s Second National Congress, where the first Party constitution was drafted.

The district has a three-year plan to better preserve local “red” sites and promote “red” culture ahead of the 100th anniversary of the founding of the Party in 2021.

The National Labor Union Secretariat is due to reopen in October. The interior design and exterior have been restored to their original look, and the exhibits will be upgraded. The secretariat was founded by the Party in August 1921 in the city’s old international settlement to unite all workers in a class war.

Jing’an is soon to make “ID” cards for its “red” sites, placing QR codes for visitors to scan to hear the stories behind the structures. More interactive plays and “red” tours will be launched in the next three years.

Jing’an sits at the heart of Shanghai. It represents the essence of the history and culture of the city, home to century-old buildings, big-name attractions, glitzy retail malls and charming art galleries.