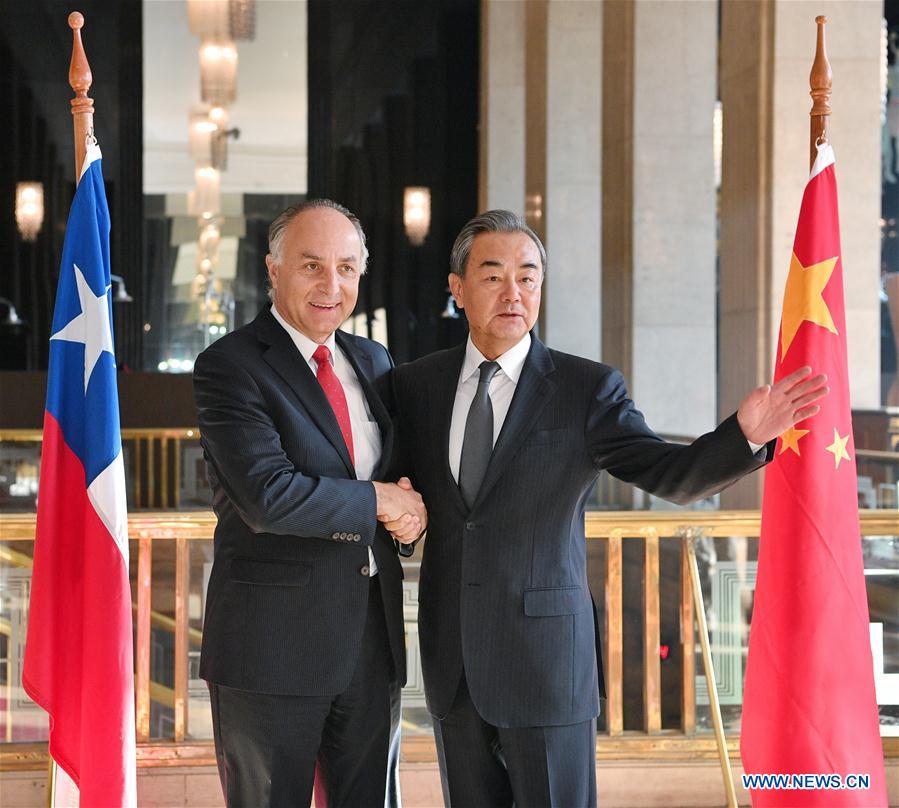 The visiting minister introduced China's views and suggestions on promoting bilateral cooperation and summarized them into four "firm supports" when meeting with journalists after holding talks with his Chilean counterpart Teodoro Ribera.

This year marks the 30th anniversary of the founding of APEC and in the face of the current complicated international economic situation, especially the rise of trade protectionism, the meeting in Santiago is of great significance, he said.

China hopes and believes that the meeting will send a positive message in support of free trade and building an open global economy, he added.

China will send a high-level delegation to participate in the conference and will work closely with Chile to play a constructive role in holding a successful meeting and make joint efforts to address global challenges, Wang said.

Thirdly, China will firmly support Chile in participating in the construction of the Belt and Road, said Wang.

In April, Chilean President Sebastian Pinera attended the Second Belt and Road Forum for International Cooperation in Beijing and made important contributions to the success of the meeting, he said.

The meeting marked a new journey of jointly building the Belt and Road with high quality and opened up new spaces for China-Chile cooperation, Wang noted.

He said China is willing to work closely with Chile in trade and investment cooperation to unleash the dividends from upgrading the free trade agreement, support Chinese companies to participate in important interconnection projects in Chile and the region based on market rules, and create new growth points such as technological innovation and the digital economy, turning Chile into an important hub for the Belt and Road Initiative in connecting the Pacific and Atlantic, as well as Asia and Latin America.

He said Chile is a very important Latin American country and plays a key role in regional organizations such as the Community of Latin American and Caribbean States (CELAC) and the Pacific Alliance.

China supports Chile in working together with other countries in the region to promote regional integration and maintain regional peace, stability and development, he said.

Chile is also the first Latin American country to host the ministerial meeting of the China-CELAC Forum, and China is willing to work together with Chile to promote the continuous development of China-Latin American cooperation and the building of the community with a shared future between China and Latin America, he noted.

China and Chile will soon celebrate the 50th anniversary of the establishment of diplomatic ties. For the past half century, China-Chile relations have continued to develop rapidly and created a number of "firsts" despite the rapid changes in the international landscape, said Wang.

During his visit, Wang also met with Alicia Barcena, executive secretary of the Chile-based United Nations Economic Commission for Latin America and the Caribbean (ECLAC). They exchanged views on strengthening cooperation between the ECLAC and China, especially in the fields of jointly building the Belt and Road, as well as overall cooperation between China and Latin America.

4.
China to deliver new batch of aid to Tonga