Abstract : The Belt and Road Initiative (BRI) will increase trade between Southeast Asia and China, and Malaysia is looking forward to serving as a hub for the greater exchange in the region, Malaysian Prime Minister Mahathir Mohamad has said. 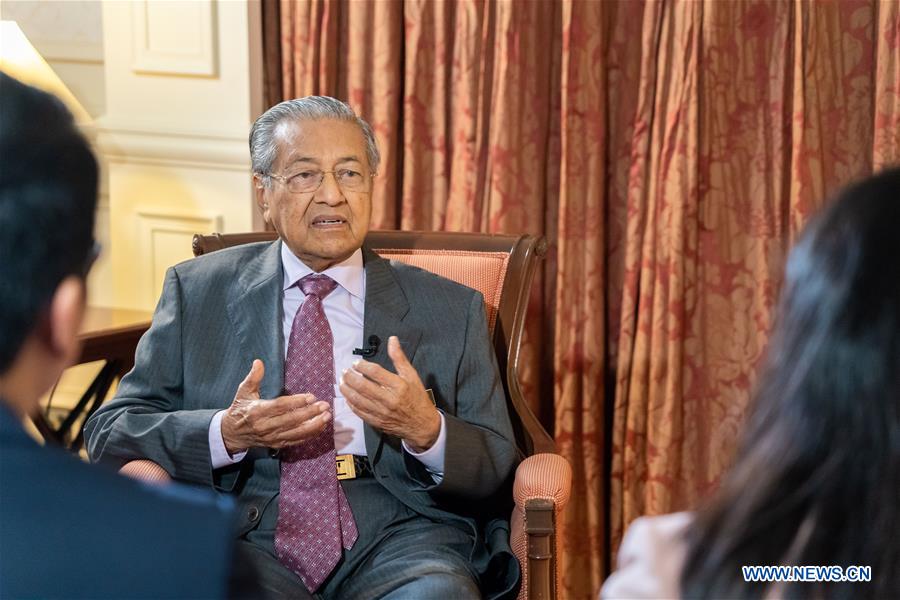 Malaysian Prime Minister Mahathir Mohamad speaks during an interview with Chinese media at the Prime Minister's Office in Putrajaya, Malaysia, April 8, 2019. The Belt and Road Initiative (BRI) will increase trade between Southeast Asia and China, and Malaysia is looking forward to serving as a hub for the greater exchange in the region, Mahathir has said. Mahathir is set to visit China to attend the second Belt and Road Forum for International Cooperation later this month. (Xinhua/Zhu Wei)

PUTRAJAYA, Malaysia, April 21 (Xinhua) -- The Belt and Road Initiative (BRI) will increase trade between Southeast Asia and China, and Malaysia is looking forward to serving as a hub for the greater exchange in the region, Malaysian Prime Minister Mahathir Mohamad has said.

Mahathir is set to visit China to attend the second Belt and Road Forum for International Cooperation later this month.

It will be Mahathir's second visit to China since he assumed office last May. The purpose of the upcoming visit is "mainly to strengthen the relationship between China and Malaysia," said the prime minister.

"The relationship has always been very close but we feel that we need to know each other better, so that we can understand the latest objectives of policies of China," he told Chinese media in an interview at the Prime Minister's Office ahead of the visit.

Mahathir will be joining other heads of state or government to the forum to discuss cooperation under the BRI, which he has repeatedly said his government supports.

The 93-year-old prime minister said he had advocated long ago the revival of the ancient Silk Road, the land route that links China to Europe, and it was good to see that China also took into consideration the Maritime Silk Road in the BRI.

"The sea route is very important," he said, adding that "it is capable of carrying bigger quantities using bigger ships, and that will facilitate trade between the East and the West."

Proposed in 2013, the BRI aims to build trade and infrastructure networks connecting Asia with Europe and Africa on and beyond the ancient Silk Road routes. It comprises the Silk Road Economic Belt and the 21st Century Maritime Silk Road.

Mahathir said he believed the BRI will boost connectivity between China and Southeast Asia.

"In the promotion of relations between countries, the distance as well as the speed of travel is very important. With this scheme, I am quite sure more ships will be passing near Malaysia and Southeast Asian countries and therefore it will increase trade between Southeast Asia and China."

Meanwhile, Malaysia's strategic location as it lies by the Strait of Malacca could help it benefit from the BRI by playing a bigger role like providing services to ships passing through.

"We are halfway between Europe and China," Mahathir said. "We can be a point where goods from China can be redistributed to the ASEAN (Association of Southeast Asian Nations) area and vice versa. Goods from Europe too can come to Malaysia and for us to be a distribution point, a hub for trade in Southeast Asia."

He said Malaysia has played such role since hundreds of years ago.

"We hope that Malaysia would be a kind of hub for China's trade with Southeast Asia. That is a role we have all along played, even in the old days. Goods from Europe, goods from China come to Malaysia and from Malaysia, small ships carry to the different islands," he said.

"So we hope that Malaysia will be the choice of China for a hub for trade," he added.

The friendly relations between China and Malaysia date back centuries. Chinese great navigator Zheng He (1371-1433) and his fleet had visited Malacca five times in the epic voyages to the West, boosting friendship and trade between the two countries.

In 1974, Malaysia became the first ASEAN country to establish diplomatic ties with China. This year, the two countries will celebrate the 45th anniversary of the establishment of diplomatic ties.

The bilateral relations between Malaysia and China have "improved tremendously" in the past four decades, said Mahathir, adding that his country has benefited from the relationship and the development of China as it became a huge market for Malaysia.

"When China decided to open up its market, Malaysia is one of the beneficiaries of that opening up. But I am quite sure other nations also benefited," he said.

Bilateral relations and cooperation between China and Malaysia have been developing fast in recent years. China has been Malaysia's largest trading partner since 2009, and total trade volume reached a record high of 108.6 billion U.S. dollars in 2018, according to China's statistics. China has also been Malaysia's largest source of foreign direct investment in manufacturing for the past three years.

Meanwhile, increasing number of Chinese tourists choose Malaysia as their travel destination for its tropical islands and cultural diversity. More and more Chinese companies are expanding their footprint to the country, bringing in investment, jobs, expertise and technology.

During his trip to China last year, Mahathir visited several leading Chinese companies including e-commerce giant Alibaba and car manufacturer Geely. He said China has made great stride in technology, in many cases surpassing other parts of the world.

"So we feel that China is a good model for us and we can learn a lot from China," he said.

During Mahathir's first tenure in office as prime minister from 1981 to 2003, he had pushed for greater cooperation with China. Over the years, he also witnessed China's tremendous growth and transformation.

In the opinion of the seasoned politician, China "can play a very big role" in regional and global affairs, and that "Malaysia has been propagating the role of China."

"China has become a very prosperous country and at this moment it is the second biggest economy in the world. I think this is extremely good because China has much that it can contribute towards the development of the world including the developing countries," he said.

Tmall act as a springboard for international brands in China

Antares entered AIM to internationalize towards the East

Sino-French festival to be held in 35 cities this year

The Belt and Road Initiative (BRI) will increase trade between Southeast Asia and China, and Malaysia is looking forward to serving as a hub for the greater exchange in the region, Malaysian Prime Minister Mahathir Mohamad has said.