Abstract : China has put into full operation a major domestic power transmission project that sends electricity from the resource-rich west of the country to energy-consuming regions in the east. 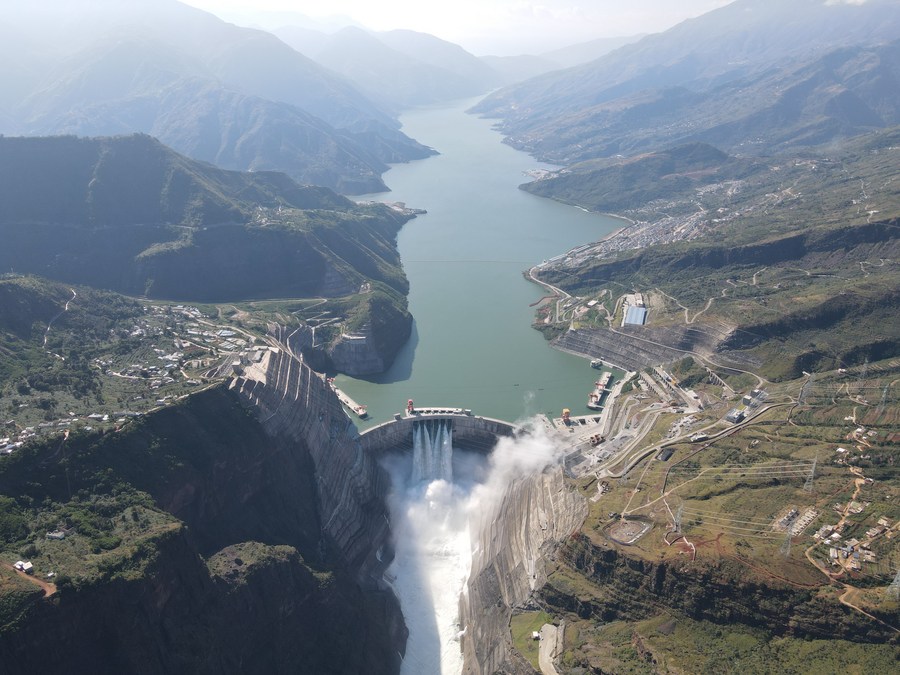 A flood discharging experiment is done at the Baihetan hydropower station, which straddles the provinces of Yunnan and Sichuan in southwest China, Oct. 29, 2022. (Xinhua/Liao Wangjie)

BEIJING/CHENGDU, Dec. 30 (Xinhua) -- China has put into full operation a major domestic power transmission project that sends electricity from the resource-rich west of the country to energy-consuming regions in the east.

The construction of the Baihetan-Zhejiang 800-kilovolt ultra-high-voltage (UHV) direct current power transmission project was completed on Friday and it has already started operating, according to the State Grid Corporation of China (State Grid).

The clean electricity generated in Baihetan, the country's second-largest hydropower station, will be sent from the southwestern province of Sichuan to the eastern Zhejiang Province through a transmission line stretching 2,121 kilometers.

A similar project that transmits power from Baihetan to Jiangsu Province in the east was put into use in July.

About 60 billion kilowatt-hours of clean electricity will be delivered annually through the two UHV projects, saving 27 million tonnes of coal and helping reduce carbon dioxide emissions by 49 million tonnes, said Huang Yong from the UHV department of State Grid.

These projects will also help eastern regions cope with the upcoming winter power use peak and will assist these regions in meeting the power demand of economic development and ensuring people's livelihoods, Huang said.

Located on the Jinsha River, the upper section of the Yangtze River in southwest China, Baihetan has a total installed capacity of 16 million kilowatts -- second only to the Three Gorges Dam project.

The Baihetan-Zhejiang project is expected to send 30 billion kilowatt-hours of electricity eastward every year, equivalent to the annual electricity consumption of 12.5 million households.

With a total investment of 60.6 billion yuan (about 8.7 billion U.S. dollars), hundreds of equipment manufacturers, construction and installation enterprises, and scientific research institutions have engaged in the power transmission projects, which have effectively stimulated investment and activated the energy sector and related manufacturing industries.

The projects not only benefit residents in eastern China, but have also promoted rural revitalization along the transmission lines in western China.

Sichuan's Liangshan Yi Autonomous Prefecture had long struggled with grinding poverty due to rough terrain, a harsh natural environment, and a lack of roads and amenities. However, the prefecture has seen a batch of clean energy projects completed and put into use, which has driven the economic development of the mountainous area.

By the end of 2021, there were 127 enterprises with individual output values of more than 100 million yuan in the prefecture, and four provincial-level development zones with a total output value of 74.3 billion yuan.

The operations of the key power transmission projects can also optimize China's energy structure and help the country meet its emissions targets -- peaking CO2 emissions by 2030 and achieving carbon neutrality by 2060.

In eastern China, coal-fired power plants are densely distributed, which has puts stress on the region's ecological carrying capacity. The power transmission projects are expected to bring remarkable improvements to the environmental quality of these areas.

Border port in Xinjiang handles over 7,000 China-Europe freight trains in 2022

China has put into full operation a major domestic power transmission project that sends electricity from the resource-rich west of the country to energy-consuming regions in the east.