Abstract : In addition to cheering for the star-studded lineups and furious rivalry, football fans from China have some extra involvement in the 2022 FIFA World Cup, owing to the strong presence of Chinese elements at the global football extravaganza. 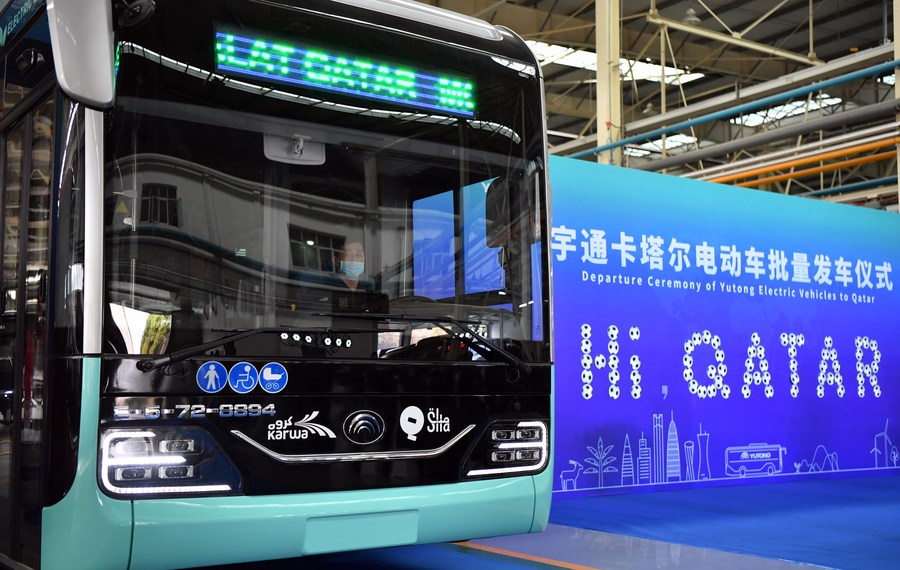 An e-bus produced by Yutong is seen during a departure ceremony of Yutong electric vehicles to Qatar in Zhengzhou, central China's Henan Province, Dec. 17, 2021. (Xinhua/Li Jianan)

From stadiums and electric vehicles to cultural derivatives, a dazzling array of Chinese-made products shine at the 2022 World Cup in Qatar.

BEIJING, Nov. 23 (Xinhua) -- In addition to cheering for the star-studded lineups and furious rivalry, football fans from China have some extra involvement in the 2022 FIFA World Cup, owing to the strong presence of Chinese elements at the global football extravaganza.

From stadiums and electric vehicles to cultural derivatives, a dazzling array of Chinese-made products has been unveiled at this World Cup, and the names of Chinese enterprises can be easily seen on banners and pitch-side signs.

Zhou Jian, China's Ambassador to Qatar, said China has made an impact on the world of football even though its national team didn't qualify for the game's showpiece event.

"I feel so honored as China is able to make contributions to the World Cup," Zhou said.

The gleaming Lusail Stadium, a centerpiece 80,000-seat venue for the World Cup which will host the final and closing ceremony, was jointly constructed by Qatar and the China Railway Construction Corporation.

"The construction of the Lusail Stadium marked the first time that a Chinese company participated as a main contractor to design and build a professional football venue under the highest FIFA standards," said leading Chinese engineer Li Bai.

"It was also the first time that a Chinese company carried out the design and construction work for a World Cup stadium." 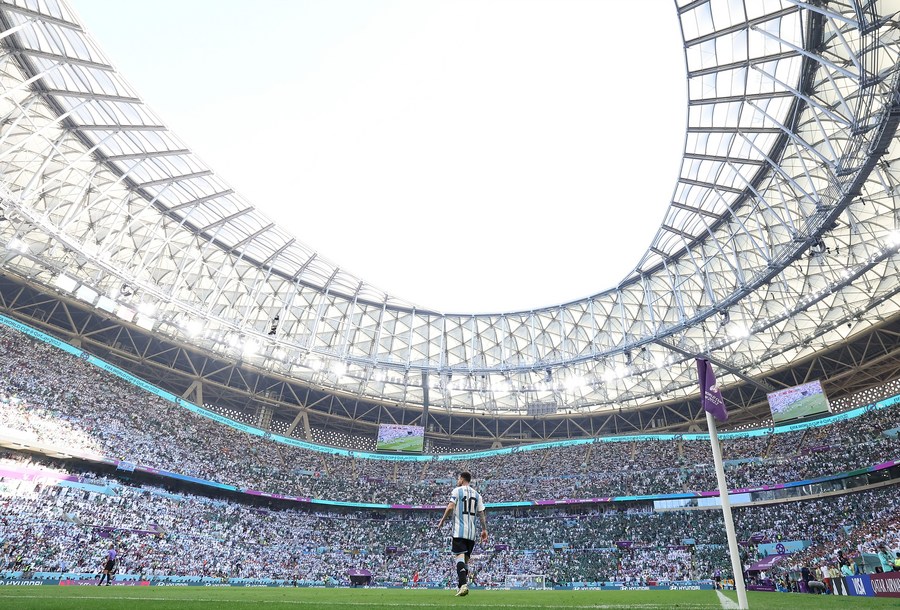 Lionel Messi of Argentina reacts during the Group C match between Argentina and Saudi Arabia at the 2022 FIFA World Cup at Lusail Stadium in Lusail, Qatar, Nov. 22, 2022. (Xinhua/Cao Can)

Chinese enterprises have also participated in the construction of the World Cup's "fan village". Some 6,000 container houses located south of Qatar's capital Doha, for example, were supplied by Chinese firms with facilities including separate bathrooms and air conditioning.

More than 3,000 Chinese-made buses are serving the streets of Qatar during the World Cup, including 888 pure electric vehicles that offer shuttle services for the thousands of officials, journalists and fans of different countries.

This is the first time that a major international sports event has used Chinese eco-friendly buses on a large scale. "That is to say that China's new energy technology has been recognized by the world," said Gan Shaoying, head of Chinese bus maker Yutong's Qatar service team.

From national flags to ornaments and pillows emblazoned with images of the World Cup trophy, products made in Yiwu, China's small commodity hub, enjoyed around 70 percent of the market share of the World Cup's peripheral goods, according to the Yiwu Sports Goods Association.

"The World Cup is a perfect stage for Chinese-made products," said Song Xiangqing, a research fellow at Beijing Normal University. "The popularity of these products is a reflection of Chinese manufacturing entering the global high-end product market."

Li Wenlu, a keen football fan and general manager of a Chinese new energy technology firm, had never imagined that the products of his company could one day march to the World Cup. His company delivered an order of supplying 12 electric carts to the World Cup.

"As long as there are large-scale projects globally, 'Made in China' would be the first choice for international clients, as Chinese-made products have competitive advantages," Li said, adding that the fine waterproof performance of their carts helped win the approval of the clients from Qatar. 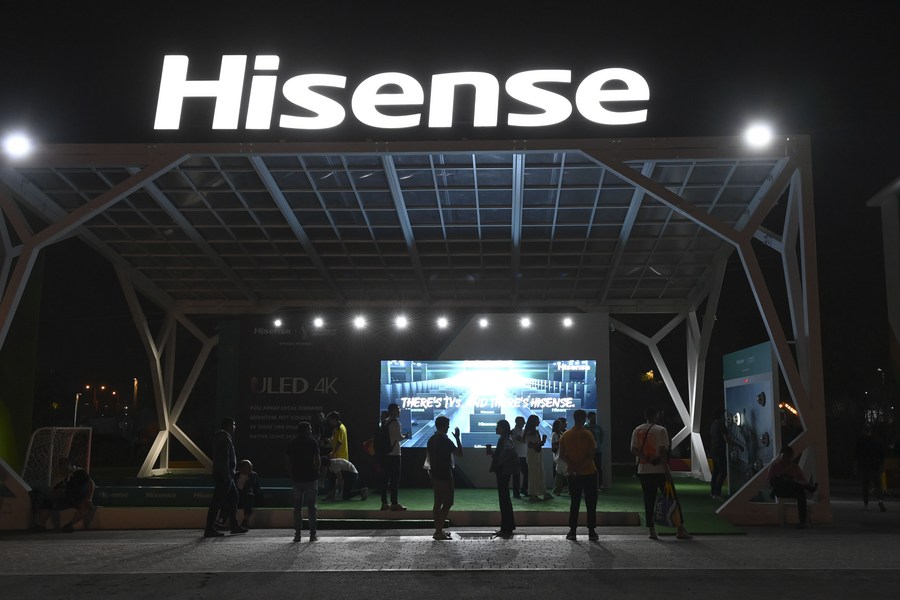 China's manufacturing is speeding up greening and intellectualization, and has made positive contributions to the global industrial chain and the stability of the supply chain, said Chen Jia, an independent international strategy analyst.

According to corporate information provider Tianyancha, more than 120,000 enterprises have gone from Yiwu to the world and these foreign trade companies have largely improved their research and development capabilities to create their brands. In the scarf category alone, Yiwu enterprises now have obtained nearly 2,000 patents.

Promoting their brands at the quadrennial event, Chinese enterprises have provided more sponsorship revenue for the host than companies from any other nation, with nearly 1.4 billion U.S. dollars in total investment, according to Global Data, a London-based consulting and analytics firm.

"Chinese companies have grown into main participants of world-class sporting events, which shows their global competitiveness, and the pandemic has failed to stop their enthusiasm and confidence," said Li Jiang, managing director of a Chinese sports marketing firm.

Data from online marketplace AliExpress involving global trade showed that sales of Chinese-produced flags and soccer shoes skyrocketed by 300 percent and 200 percent, respectively, in November, from a month earlier.

"We have seen the sales of soccer equipment increase greatly recently due to the eye-catching World Cup," said Xu Xiao, head of cross-border e-commerce unit of KELME.

"But we don't mean to make a quick buck on a whim," Xu added, noting that many Chinese enterprises are now focusing on long-term business and are dedicated to forming lasting competitiveness.

In addition to cheering for the star-studded lineups and furious rivalry, football fans from China have some extra involvement in the 2022 FIFA World Cup, owing to the strong presence of Chinese elements at the global football extravaganza.