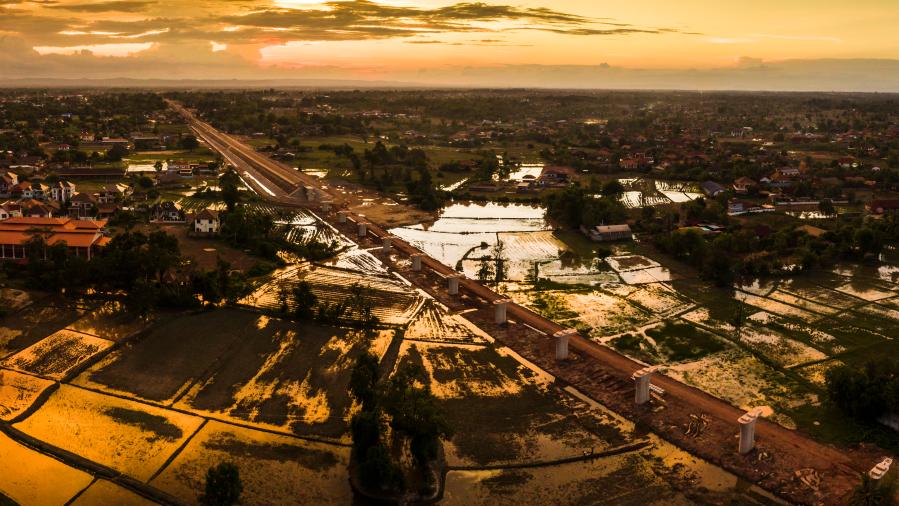 Aerial photo taken on May 29, 2020, shows a view of the under-construction China-Laos Railway running through the outskirts of the Lao capital Vientiane. (Xinhua/Pan Longzhu)

Among them is Boudsada Lathsakoumman, who was admitted to a vocational college in Guangxi's Liuzhou city two years ago. "I had never expected to develop a bond with China's tea culture," says the 21-year-old.

In 2019, the college joined hands with a Lao company to set up a training base to nurture talent in the tea industry. "I have attended plenty of 'tea art performance' contests in recent years and got to make many Chinese friends," says Lathsakoumman, one of the trainees.

A major in logistics management, the young trainee experienced fast and efficient logistics that bolsters the booming e-commerce economy in China.

"Studying in Guangxi which lies close to the Association of Southeast Asian Nations (ASEAN) region gives me the opportunity to have a closer look into regional connectivity, and the greater mutual cooperation between China and ASEAN countries," she says.

This year marks the 60th anniversary of the establishment of diplomatic relations between China and Laos. In recent years, more and more Chinese enterprises have invested in Laos, covering fields such as mining, electric power, agriculture, and the service industry.

Nowadays, China has become the second-largest trading partner and the country with the largest foreign direct investment in Laos.

Meanwhile, products from Laos are gaining popularity in China. Listed as one of the world's 10 best beers, Beerlao has been in the Chinese market since 2011, and the Lao Brewery Co., Ltd. that produces the drink became the first ASEAN company to sponsor the China-ASEAN Expo in 2012.

Within years, China has become the largest overseas market for the fast-selling beer brand, accounting for about 70 percent of its total sales worldwide.

During this year's 18th China-ASEAN Expo that concluded on Monday, Laos was the Country of Honor, for the third time. Liang Yiguang, deputy secretary-general of the expo secretariat said a number of specialty goods from Laos such as beer and coffee saw in the expo an opportunity to enter the Chinese market.

Lathsakoumman participated in an activity organized by the China-ASEAN Youth Campus during the summer vacation, and took the high-speed train for the first time. "The high-speed rail service in China is so convenient and efficient," she says.

The construction of the China-Laos railway is taking place under the framework of the Belt and Road Initiative.