Abstract : In Thailand's fight against the coronavirus and its variants, Chinese vaccines have played a vital role in inoculating its people, with millions having received either a Sinovac or Sinopharm jab.

BANGKOK, July 25 (Xinhua) -- In Thailand's fight against the coronavirus and its variants, Chinese vaccines have played a vital role in inoculating its people, with millions having received either a Sinovac or Sinopharm jab.

The Sinovac vaccine, the first COVID-19 vaccine that entered Thailand, has helped the Southeast Asian country kick-start its national inoculation program. It's also the primary vaccine in the national roll-out.

As of Saturday, China has provided to Thailand 17 batches of vaccines, totaling 17.5 million doses, according to data from the Chinese Embassy in Thailand.

As the world's largest COVID-19 vaccine supplier, China has provided more than 500 million doses and concentrates to over 100 countries and international organizations, accounting for one sixth of the total global output.

With Chinese vaccines being administered worldwide, they have been found, according to multiple studies, highly effective in preventing infection, hospitalization, severe illness and death from the virus.

In Thailand, a field study by the Ministry of Public Health (MOPH) among high-risk groups that had received Sinovac jabs in three worst-hit regions, found that two jabs of Sinovac vaccine can offer a strong protection against COVID-19 infection and pneumonia, for cases of either Alpha variant or Delta variant.

The study, conducted during the April-June period, has shown that in April and May, when the Alpha variant was spreading in Thailand, two jabs of Sinovac provided about 90 percent protection against COVID-19 infection and were 85 percent effective against lung infection, while in June, when 20 to 40 percent of COVID-19 cases were caused by the Delta variant, two Sinovac jabs showed 75 percent effectiveness.

Amid changes caused by new virus variants, "our field studies have not found a decrease in (Sinovac) vaccine effectiveness," said Taweesup Sirapraphasiri, an official with Thailand's Department of Disease Control.

Another study run by the Center of Excellence in Clinical Virology of the Faculty of Medicine at Thailand's Chulalongkorn University, has found that the Sinovac vaccine has extremely high efficacy in boosting immune responses against COVID-19.

Experts stressed that breakthrough infections do not mean vaccines are pointless, as immunization helps protect people against COVID-19-induced severe illness. 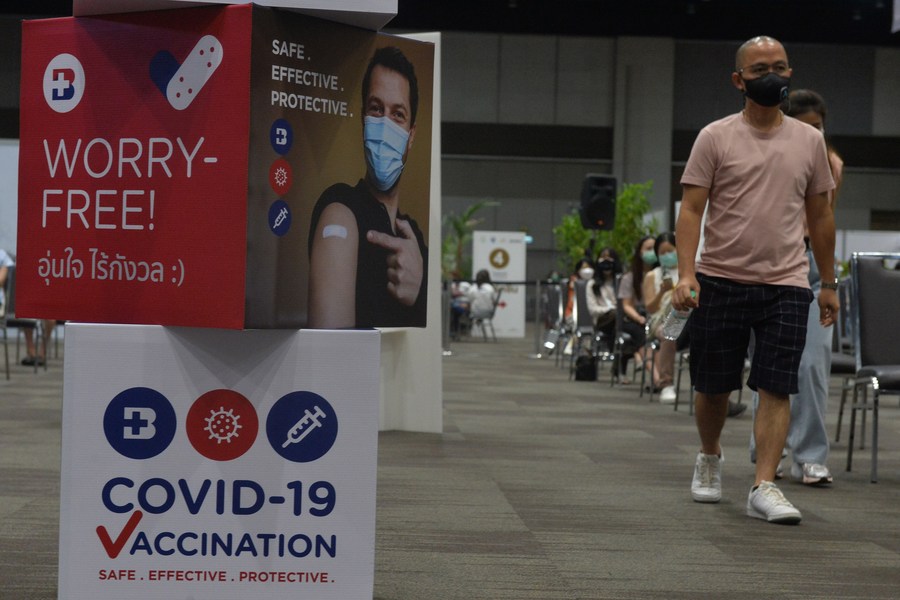 People are seen at a vaccination site in Bangkok, Thailand, June 7, 2021. (Xinhua/Rachen Sageamsak)

The Chinese vaccines, with the first batch arriving in February, have supported Thailand's fight against the second wave of the outbreak that started in mid-December and a third wave that began in early April.

"It's hard to imagine how many more medical workers and people might have been infected if they have not been inoculated with the Sinovac vaccine during the past few months, and how many more lives might have been cost?" said Prakit Vathesatogkit, an expert on lung diseases at Thailand's Ramathibodi Hospital, Mahidol University.

As the country is grappling with the third wave, also the most deadly wave, which has overwhelmed its medical system, it needs speedy vaccine roll-out to control the situation.

Thailand needs and will continue to use the Sinovac vaccine because of its effectiveness and quick delivery, as "we do not have to wait until the fourth quarter of the year or even next year" for supplies, said Taweesup.

Thailand has so far approved six vaccines for emergency use, but only three of them are now available for injection, namely the AstraZeneca as well as China's Sinovac and Sinopharm.

Some 5 percent of the entire population have been fully vaccinated, far below the government's target of vaccinating 70 percent of the people by the end of the year.

Looking at the government's vaccine distribution per day, it is still far away from the vaccination target, which is a big concern, Puey said. 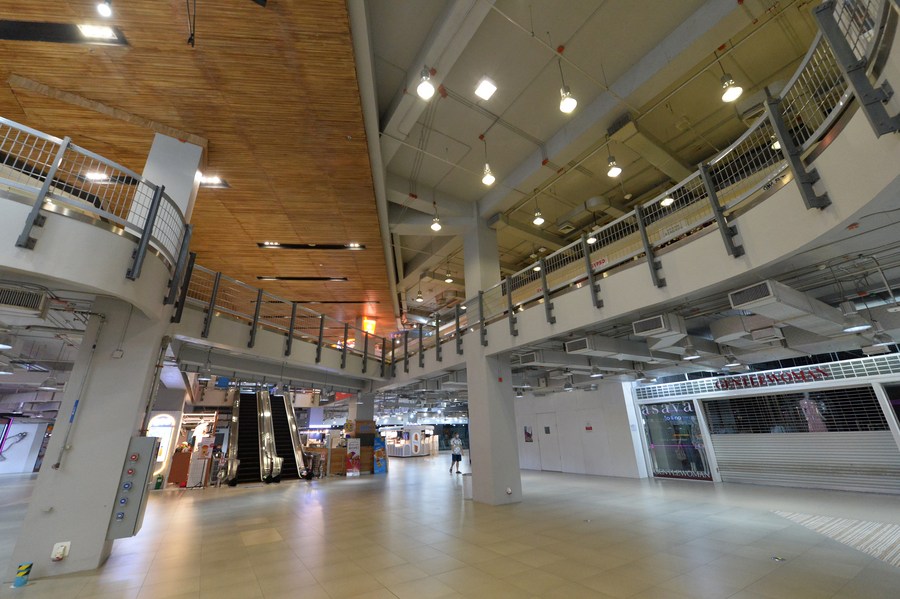 Thailand's economy, heavily reliant on tourism, has taken a toll from the pandemic, and accelerating vaccination is viewed as the key to recovery.

The Bank of Thailand, the country's central bank, viewed the procurement and distribution of vaccines as "the most important issue facing the Thai economy."

To support tourism and boost growth, Prime Minister Prayut Chan-o-cha announced in June that the country planned to fully reopen to international travelers within 120 days.

As a pilot, from July 1, the country allowed fully-vaccinated foreign visitors to enter its resort island Phuket without quarantine, where 69 percent of local residents had been fully inoculated as of Thursday.

Due to the third wave of the outbreak, the World Bank, in the Thailand Economic Monitor report for July, lowered its 2021 growth forecast for the economy to 2.2 percent, from a projection of 3.4 percent in March.

Any delay in the scheduled vaccine roll-out could adversely impact domestic mobility, consumption and tourism, the report said. ■

5.
Balance of loans in Shanghai rises at end of August

In Thailand's fight against the coronavirus and its variants, Chinese vaccines have played a vital role in inoculating its people, with millions having received either a Sinovac or Sinopharm jab.