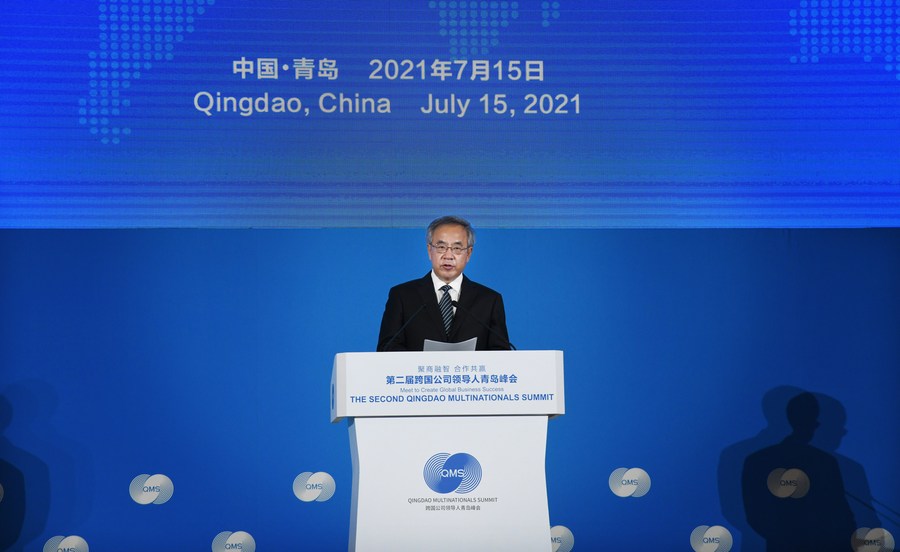 Representatives of 390 Fortune 500 companies and 517 industry leaders attended the two-day event either online or offline. The event aimed to establish a high-end platform for dialogue between multinational companies, and political and academic circles amid the country's drive to promote high-quality opening-up and build a community with a shared future for humanity.

Against the backdrop of the pandemic, and with the great changes the world is now facing and China's increasingly steady economic momentum, the event demonstrates China's determination to open up to a higher level, according to Vice Commerce Minister Qian Keming prior to the event's opening. He also noted that the event would enhance the confidence of multinational companies in investing and developing in China.

"The summit itself conveys a positive signal that China is willing to build an open global economy with other countries," said Xie.

"A platform like the Qingdao summit is needed under the current complicated situation," noted Zhao Zhongxiu, president of the Shandong University of Finance and Economics.

"It not only shows China's more fine-tuned policies and optimized business environment, but also enables Chinese enterprises to better communicate with multinational companies and explore new cooperation models, which can benefit both sides," Zhao added.

Underpinned by the country's sustainable economic recovery and strong global demand, China's foreign trade rose 27.1 percent year on year to 18.07 trillion yuan (about 2.79 trillion U.S. dollars) in the first half, a record high.

"The Chinese government's timely and effective response to the coronavirus outbreak helped our company maintain growth in all business sectors in 2020," said Air Liquide China President and CEO Nicolas Poirot, who added that some of his company's subsidiaries were also granted tax cuts, subsidies and support in cross-border cargo transportation from the government.

China's huge domestic market and sound industrial infrastructure has made it one of the most attractive markets for foreign investment. Its constant efforts to improve its business climate also have enhanced investor confidence in further tapping the Chinese market, according to participators at the summit.

Many multinationals at the summit said they counted on China to pull up global economic growth amid uncertainties stemming from the pandemic. They are also exploring new opportunities and broadening areas of cooperation as China's economic recovery continued to consolidate in the first half.

As China's working-age population continues to decline and its society continues to age, the demand for high-tech automation products is expected to soar, which offers Festo a new growth point, according to Chen Hong, vice president of sales at Festo Business Region Greater China.

Many companies are eyeing the green industry. China's industries are pouring more investment into energy-saving, cost-reducing, green development and low-carbon areas, which will bring us considerable business opportunities, said Will Li, head of Linde Greater China.

China is striving to peak carbon dioxide emissions by 2030 and achieve carbon neutrality by 2060, and the demand for safe, comfortable and sustainable infrastructure in China's metropolises will increase, according to Michael Zhu, vice president and general manager of Johnson Controls (China).

"Our smart building and digital solutions are expected to help with the green and efficient use of energy in urban buildings to ensure the carbon emission reduction targets," said Zhu. Enditem

Business leaders pinned high hopes on China to drive global economic recovery at the second Qingdao Multinationals Summit, which concluded on Friday in the coastal city of Qingdao in east China's Shandong Province.