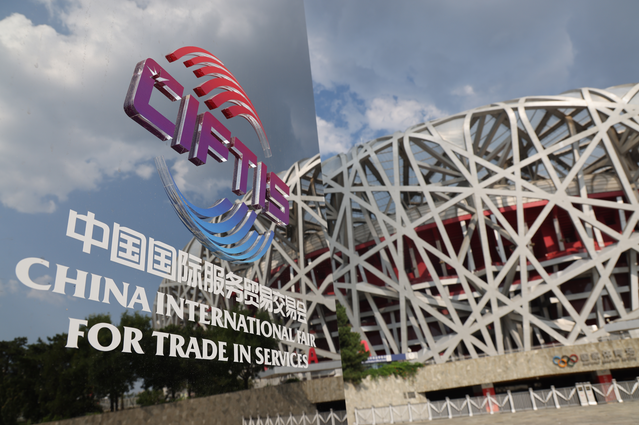 Photo taken on Sept. 2, 2020 shows the outdoor exhibition area of the China International Fair for Trade in Services (CIFTIS) in Beijing, capital of China. (Xinhua/Xing Guangli)

There will be three versions of the negative list, namely a version for the Hainan free trade port (FTP), a version for pilot free trade zones (FTZs), and a national version, among which the FTP version is expected to come out first, according to experts involving in the drafting of the policy document.

The new negative list will focus on lifting commercial presence restrictions on overseas service providers and expanding the scope of cross-border provision of services. This will boost liberalization of cross-border service trade and provide a new engine driving growth in China's trillion-yuan-level service trade market, said the experts.

The drafting of the negative list has been completed and corresponding procedures are in progress, according to Wang Shouwen, Vice Minister of Commerce.

By rolling out negative list for cross-border service trade in pilot FTZs, China will endeavor to deepen opening up of rules, regulations, management and standards, Wang Wentao, Minister of Commerce said at a press conference at the beginning of the year.

-- A market at trillion yuan level

The release of the negative list for cross-border trade in services will unleash the huge potential of China's service trade market, which is estimated to have a scale of several trillion yuan, and inject new impetus to the country's foreign trade, experts said in an interview with the Economic Information Daily.

The release of the new negative list will put an end to the problem of letting foreign firms come into China but not allowing them carry out business in service trade areas, thus promoting the opening up and cooperation in the field of service trade in China, said Nie Pingxiang, researcher with the Chinese Academy of International Trade and Economic Cooperation under the MOC.

Chi pointed out that due to impact of the COVID-19 pandemic in 2020, global service trade declined over 20 percent and the service trade in China decreased 15.7 percent. However, with the pandemic gradually under control, service trade is likely to recover and achieve rapid growth.

There remains huge room for growth in China's service trade. In terms of exports, China's service industry develops fast with greater international competitiveness and improving export capability. In terms of imports, the huge market with a population of 1.4 billion, the fast economic growth and increasing per capita disposable income, all indicate enormous opportunities for service imports, according to Zheng Wei.

Taking into account such factors as China's service consumption growth and the opening up of the service market, service trade in the country is expected to register an average annual growth rate of around eight percent from 2020 to 2035, according to projection made by CIRD.

The negative list for cross-border service trade will bring multiple benefits to China's opening up at a higher level, experts stated.

The negative list will reduce the commercial presence restrictions on cross-border supply of services, which will be conducive to cross-border service trade liberalization, said Zheng Wei.

He added that the negative list would also create a more convenient environment for foreign talents to work in China. This will further help China attract more high-end talents from other countries and regions to do business in the country.

Nie Pingxiang pointed out that as service trade involves many areas such as finance and telecommunications, the negative list poses higher requirements for the supervision and risk prevention and control capabilities of governments at all levels.

To steadily promote the opening-up of service trade, China will make different versions of negative lists, said Nie, also noting that the negative list for the Hainan FTP is expected to be the shortest and it may lift restrictions as much as possible on prioritized modern service industries such as tourism, exhibitions, and logistics.

This idea was echoed by Zheng Wei, who moved further to mentioned that the negative list for pilot FTZs would probably take the lead in making trials in major fields of cross-border service trade opening up based on industrial and geographical advantages of different FTZs, while the national version will focus on establishing a system for the opening up of cross-border trade in services that is commensurate with China's development stage. (Edited by Su Dan with Xinhua Silk Road, sudan@xinhua.org)