Abstract : China's southern island province of Hainan is growing into a magnet for investment with the release of more and more preferential policies. 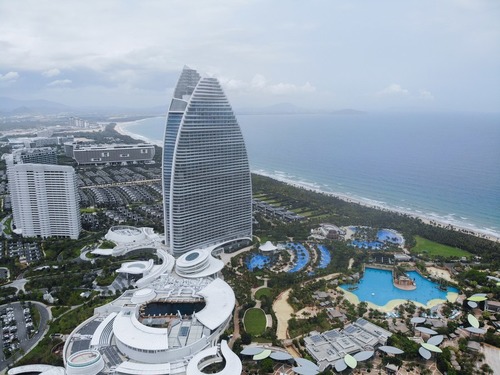 BEIJING, April 15 (Xinhua) -- China's southern island province of Hainan is growing into a magnet for investment with the release of more and more preferential policies.

-- Major changes in the past three years

Shen Xiaoming, Party chief of Hainan, told a press conference that as Hainan is vigorously advancing the reform and opening up in an all-around manner, it has taken on significant changes many aspects.

"Local people are unprecedentedly enthusiastic for working and doing business; various market entities are active in responding to the trend; talents are gathering at a faster speed; significant progress is seen in improving the quality of economic growth; ecology is getting better; business environment is improving; modern industrial pattern is taken shape," said Shen.

Hainan attracted 233,000 talents in the past three years, surging 675 percent year on year. In particular, over half of the talents were introduced within one year after the release of master plan, said Shen.

In term of economic quality, "Hainan has determined to shake off the reliance on real estate industry, with the ratio of industrial investment in total investment rising from less than 40 percent to over 60 percent," said Shen, adding that Hainan has made steady ecological progress. By far, new energy vehicles have accounted for 4.2 percent of the total, 1.3 times higher than the national average.

Feng Fei, governor of Hainan, attributed Hainan's rise as investment magnet to the shortest negative list on foreign investment and the lowest tax burden for companies. "These two policies are peerless in China."

-- Favorable policies one after another

Recently, a package of favorable policies have been rolled out to ease market access in the Hainan free trade port .

The National Development and Reform Commission and the Ministry of Commerce jointly issued a guideline on April 8 in a bid to build the resort island into a globally influential, high-level free trade port.

The guideline detailed 22 measures to innovate market access in the pharmaceutical and heath sectors, optimize financial market entries and development environment, and promote wider entries in the fields of culture and education.

On April 9, some 33 measures were introduced in a guideline jointly issued by the central bank and three government agencies, aiming at improving the convertibility of renminbi (RMB), fine-tuning the financial market and enhancing the opening up of the financial sector in Hainan.

"According to preliminary statistics, China has issued more than 110 policy documents to boost the development of Hainan free trade port. By far, the basic institutional framework has been set up," said Cong Liang, deputy head of the National Development and Reform Commission, at the press conference.

According to Cong, Hainan has introduced measures that center on zero tariffs for the trade of goods and unveiled one negative list and two positive lists for trade facilitation.

-- More supportive policies on the way

Vice Minister of Commerce Wang Shouwen revealed at the press conference that the ministry has drafted a negative list for the cross-border trade in services in the Hainan free trade port. "The drafting work has been finished, with related procedures in process."

Meanwhile, "the Ministry of Commerce and Hainan Province will jointly hold the first China International Consumer Products Expo from May 7 to May 10. The preparation work is underway," said Wang.

According to Wang, China will roll out 28 policies and measures to further liberalize and facilitate trade in the Hainan free trade port.

The policies will allow certain regions to relax their control of import and export qualifications for and quantities of commodities such as crude oil, refined oil and sugar, and cancel their licensing systems for imports such as mechanical and electrical products, he said.

Furthermore, the Hainan free trade port law is just around the corner. "Hainan is actively coordinating with the National People's Congress to advance the legislation of the Hainan free trade port law, and seeking more legislative power and greater autonomy for its reform," said Shen. (Edited by Zhang Yuan with Xinhua Silk Road, zhangyuan11@xinhua.org)

China's southern island province of Hainan is growing into a magnet for investment with the release of more and more preferential policies.