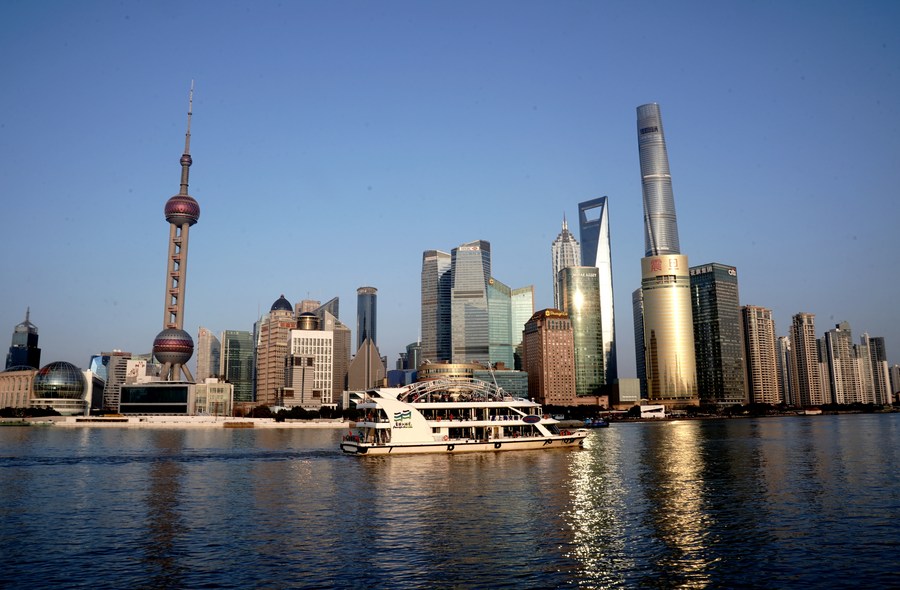 A tourist boat sails on the Huangpu River next to the Bund during the Lunar New Year holiday in east China's Shanghai, Feb. 14, 2021. (Xinhua/Zhang Jiansong)

China has put forward in its recently-published Outline of the 14th Five-Year Plan (2021-2025) for National Economic and Social Development and the Long-Range Objectives Through the Year 2035 to open wider to the world in all respects, promote trade and investment liberalization and facilitation, continue to deepen opening-up based on the flow of goods and factors of production, and steadily expand institutional opening-up based on rules, regulations, management, and standards.

Many foreign-funded firms in China have said that China's broader opening-up will create a wider development platform and a better market environment for them.

China is the most important business growth market of Johnson Controls, a U.S. industrial giant, and its business in China accounts for 40 percent of its total business in the Asia-Pacific region.

At the third China International Import Expo (CIIE) held November 2020, the company signed 11 purchase letters of intent with a total amount of over 18 million U.S. dollars, and received more than 3,000 customer inquiries, double that in the second CIIE.

"The face-to-face communication with so many Chinese companies and customers has once again impressed us with the surging vitality of the Chinese market and the huge potential China has in artificial intelligence, digital application and other fields", said Zhu Yonghuan, vice president and general manager of China with Johnson Controls.

China has proposed to realize peaking carbon emissions by 2030 and carbon neutrality by 2060, and is creating more new forms of business in 5G, Internet of Things (IoT), artificial intelligence and other new infrastructure fields.

"This means that relevant industry chains will have huge space for development and there will be real market opportunities for enterprises", said Zhu.

With the rapid growth of the Chinese economy, Danish toymaker Lego Grouphas also seen its development in the Chinese market on the fast lane.

The group has opened its only factory and its first flagship store in the Asia-Pacific region respectively in Jiaxing City of east China's Zhejiang Province and the Disneytown of east China's Shanghai Municipality. The Chinese market has become one of the top five markets of the group in the world.

In October 2020, the group opened its 200th branded retail store on the Chinese mainland in Nanchang City of east China's Jiangxi province, and plans to open 80 more this year.

In the view of Huang Guoqiang, the senior vice president and general manager of China with Lego Group, the rapid development of the group's business in the Chinese market has benefited from the continuously-optimized business environment of the country.

The Chinese government has constantly strengthened the protection of intellectual property rights, which provides stronger legal guarantee for the development of enterprises and cements the company's confidence to develop in China, said Huang.

French sports chain store Decathlon has opened physical stores in more than 100 cities in China since it entered the Chinese market in 2003, and its products produced in the Chinese factory are sold to more than 20 countries, accounting for half of the company's global market.

China is the only overseas market where the company invests in the whole industry chain, involving research and development, design, production, logistics and retail.

Michel Leclerq, founder of Decathlon, said he was "very optimistic about the innovation potential of the Chinese economy".

China's speedy building of a higher level of all-round opening-up and continuous improvement of business environment will "further enhance the confidence and motivation of foreign businesses to develop in China", said Wang Tingting, vice president and director of corporate communications with Decathlon China.