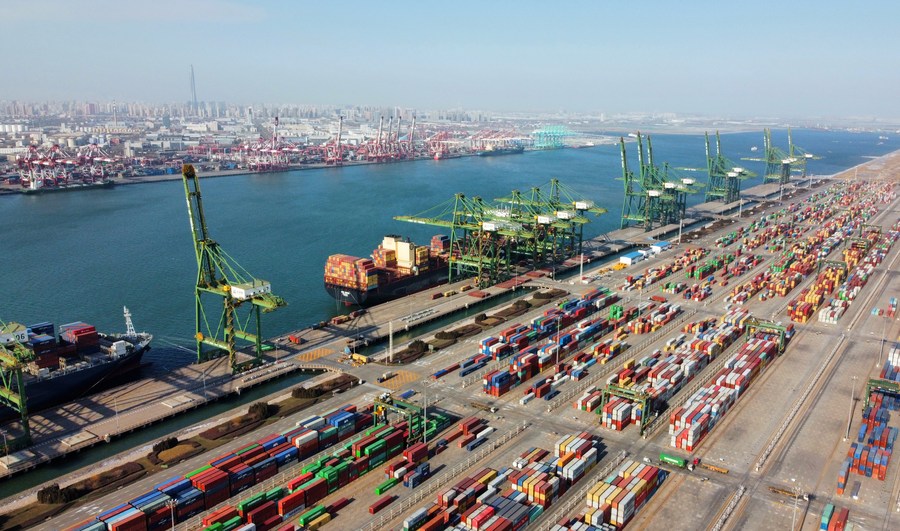 The outline has set 20 major indicators for economic and social development from 2021 to 2025, and clarified a number of major initiatives and arrangements, including 102 major projects covering artificial intelligence, quantum information, integrated circuits, life and health, ecosystem protection and restoration, etc.

China has for the first time set no expected indicator for the average annual GDP growth in the five-year plan.

Considering the uncertainties in the internal and external environment in the next five years, setting no quantitative growth target is favorable for responding to various risks and challenges in a more proactively and calmly way, and guiding all parties to focus on improving the quality and efficiency of development, said Hu Zucai, deputy director of the National Development and Reform Commission (NDRC), China's top economic planner.

High-quality development is the theme of China's economic and social development during the 14th Five-Year Plan period and beyond, and bears on the overall situation of China's socialist modernization drive.

The outline clearly states that innovation should be kept at the core of the overall modernization drive, and efforts should be made to nurture leading and pillar industries and make the added value of strategic emerging industries account for more than 17 percent of the gross domestic product (GDP).

It also states the target of increasing the proportion of the added value of core industries of the digital economy in the GDP to 10 percent by 2025.

In order to promote green development, an important part of high-quality development, the outline proposes to cut energy consumption and carbon dioxide emissions per unit of GDP by 13.5 percent and 18 percent respectively, make the proportion of days with good air quality in cities at prefecture level and above reach 87.5 percent and the proportion of surface water at or better than class-Ⅲ also reach 87.5 percent, and raise the forest coverage to 24.1 percent.

It also calls for the implementation of the 2030 target of nationally determined contributions to climate change and the formulation of an action plan for peaking carbon emissions by 2030.

In the outline, more than one third of the indicators listed are related to people's well-being, the highest among all China's five-year plans, and covering employment, income, and elderly care, etc.

It's noteworthy that, for the first time, the comprehensive production capacity of grain and energy was included in the main indicators of the five-year plan, with the targets set respectively as over 650 million metric tons (tonnes) and over 4.6 billion tonnes of standard coal by 2025.

China's recently-published Outline of the 14th Five-Year Plan (2021-2025) for National Economic and Social Development and the Long-Range Objectives Through the Year 2035 has unleashed a strong signal of high-quality development, reported Economic Information Daily Monday quoting experts.