Abstract : Despite the raging COVID-19 pandemic, China won the battle against poverty in the new era in 2020 as planned. 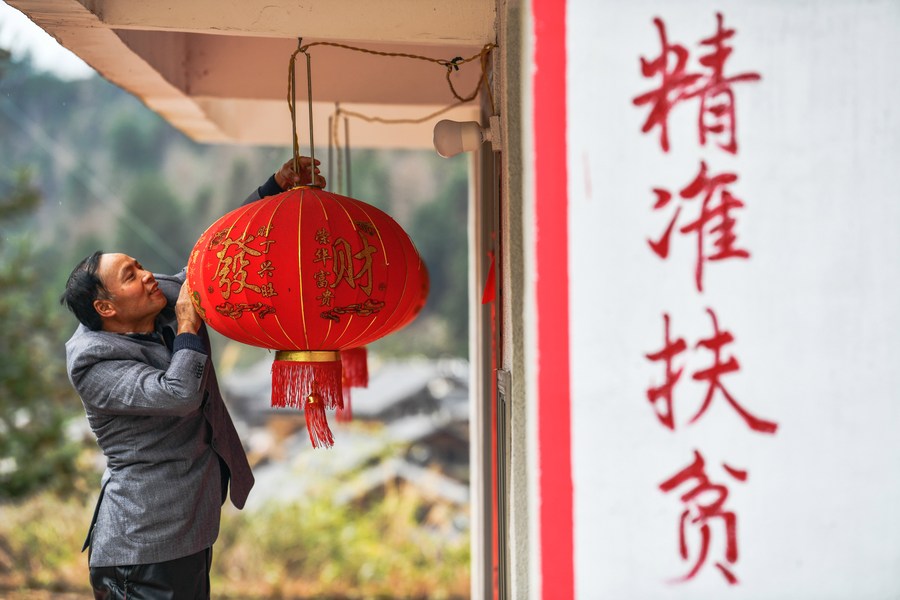 A villager who has shaken off poverty, arranges a red lantern in front of his new residence at Sangma Village, Yingshan Township in Dushan County of southwest China's Guizhou Province, Jan. 25, 2020. (Xinhua/Yang Wenbin)

BEIJING, March 4 (Xinhua) -- Despite the raging COVID-19 pandemic, China won the battle against poverty in the new era in 2020 as planned.

-- Set a model for the world

Martin Raiser, the World Bank's country director for China, said in an interview that significant changes have taken place in the relations between the World Bank and China. China is growing into a donor of the World Bank in the field of financial resources and knowledge.

He also said China's experience in agriculture and rural development is widely recognized by the UN, and China's exploration of models, forms, pathways, and concepts in this aspect will be highly praised across the world.

Jabbour said many measures China adopted to narrow the gap between the rich and the poor offer a significant model for other developing countries, and China sets an example in many fields of economic development.

International observers expressed, the economic growth of one country does not necessarily lead to natural elimination of absolute poverty, but China eradicates extreme poverty under its fast economic development.

Surasit Thanadtang, director of the Thai-Chinese Strategic Research Center, National Research Council of Thailand, believed that the governance philology is the positive experience for other developing countries to narrow the gap between rich and poor, and the practice makes agricultural department feel more fulfilled.

Surasit said, poverty is a common challenge faced by all. Poverty elimination is a tough problem that should be solved in building a community with a shared future for mankind. China's success makes the world recognize the significance of targeted poverty alleviation, see the hope of getting rid of poverty, and instill courage and experience of poverty relief.

China's major victory of poverty eradication is closely related to China's focus on solving problems related to agriculture, rural areas, and farmers. In addition, China adopts a series of measures to ensure food security, which helps improve living conditions in rural areas, said an Argentine expert on China issues, adding that in 2020, China overcame the negative impact of the outbreak of the pandemic, and secured another grain harvest, demonstrating China's resolve of ensuring food security.

Poverty relief is a common challenge faced by the international community. Impacted by the pandemic, global poor population rose in 2020 for the first time in many years. This new situation poses grave challenges to the global cause of poverty reduction.

China's achievements in eradicating severe poverty serve as an example for other countries, said the Director-General of the International Labour Organization Guy Ryder, adding that China clearly takes eliminating poverty as the primary goal of the country's strategy, and more countries should learn from China. (Edited by Yang Yifan with Xinhua Silk Road, yangyifan@xinhua.org)

Despite the raging COVID-19 pandemic, China won the battle against poverty in the new era in 2020 as planned.