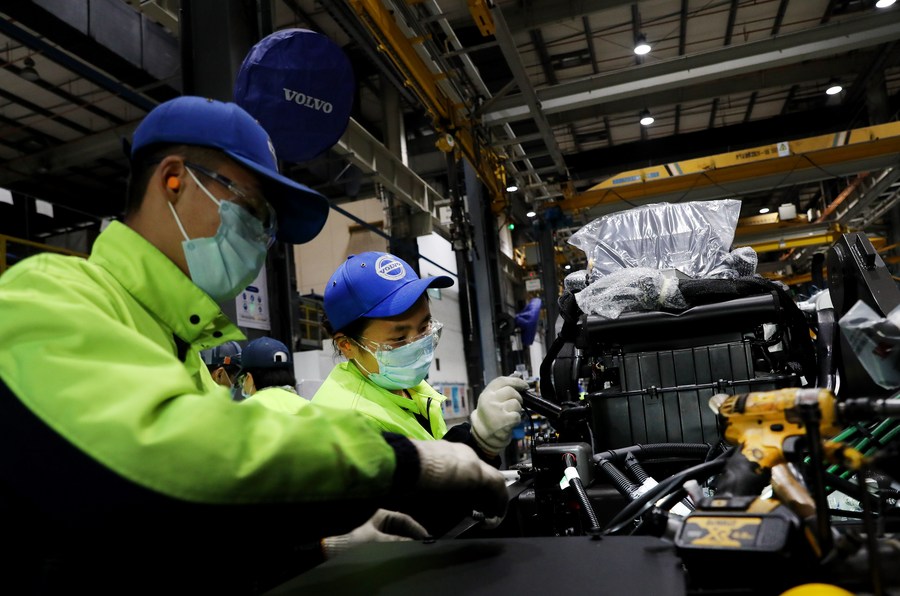 SHANGHAI, Jan. 5 (Xinhua) -- More than a month after the closing of the 3rd China International Import Expo (CIIE), the Shanghai factory of Volvo Construction Equipment (Volvo CE) announced that its 40,000th piece of equipment came off the line in late December, marking another milestone in the company's 18-year presence in China.

In November, the Swedish manufacturing company Volvo Group participated in the CIIE as an independent exhibitor for the first time, and a number of Shanghai-made electric excavators were launched for the first time. Some new products were exclusively designed for the Chinese market.

The expo, which runs for nearly a week in Shanghai every November, is considered a useful starting point for multinationals like Volvo to further nurture their businesses in China. Multinationals not only launch cutting-edge products at the expo but eye the lucrative market for the coming years.

"The 3rd CIIE in Shanghai has sent a strong signal of China's economic recovery and demonstrated the Chinese government's determination and action to promote international exchanges and trade," said Ma Jun, president of the Volvo (China) Investment Co., Ltd.

"Despite the raging COVID-19 outbreak early this year, we moved the Asian headquarters of the Volvo CE and Volvo Financial Services to China," Ma told Xinhua in late December. "The epidemic in China was soon brought under control thanks to efficient government-led measures, and the market quickly recovered, which also benefited our business here."

Cargill, a global food corporation that has participated in the CIIE for three consecutive years, is expanding its investment in China after attending the expo.

Cargill signed contracts worth over 2.7 billion yuan (416.9 million U.S. dollars) during the last expo, said Liu Jun, president of Cargill China, adding that the increasing interests of both purchasers and consumers in their products greatly encourage the company to further expand its business in the future.

In mid-November, the company announced that its animal nutrition factory in Yichun City, southeast China's Jiangxi Province, has been put into operation.

The factory, covering nearly 48,000 square meters with a total investment of 350 million yuan, will become one of Cargill's major factories of its kind among a dozen of such plants across China.

The improving business environment in China also boosts the confidence of foreign companies to further tap the market that has opened wider.

Since Jan. 1, 2020, the Foreign Investment Law has taken effect, easing foreign access to the financial market with more pilot programs to promote trade in services.

Following the law, Shanghai also passed regulations on foreign investment which highlights high-level opening up and high-quality investment from overseas.

China has implemented the reform and opening-up policy for over four decades, from which foreign firms are also learning and gathering experience, said Zhang Jun, head of the School of Economics of Shanghai-based Fudan University.

They also expect to play well in the new development paradigm of "dual circulation," where the domestic and overseas markets reinforce each other, with the domestic market as the mainstay, Zhang added.

"China, undoubtedly, is and will be an important market for us in the long run, and we will continue to promote our business here to seek for sustainable, prosperous development," said Ma of Volvo (China) Investment Co., Ltd.