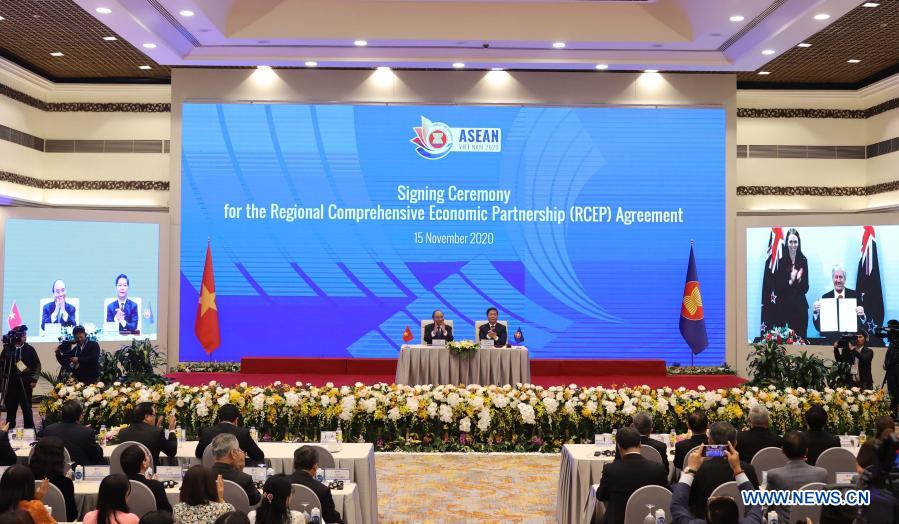 The signing ceremony of the Regional Comprehensive Economic Partnership (RCEP) agreement is held via video conference in Hanoi, capital of Vietnam, Nov. 15, 2020. The RCEP agreement was signed among its 15 participating countries on Sunday, launching the world's biggest free trade bloc. (VNA via Xinhua)

The RCEP Agreement "is an unprecedented mega regional trading arrangement that comprises a diverse mix of developed, developing and least developed economies of the region," leaders of the participating countries said in a joint statement at the fourth RCEP summit earlier Sunday prior to the signing ceremony.

The RCEP Agreement is critical to the region's response to the COVID-19 pandemic and will play an important role in building the region's resilience through inclusive and sustainable post-pandemic economic recovery process, said the leaders.

It "demonstrates our strong commitment to supporting economic recovery, inclusive development, job creation and strengthening regional supply chains as well as our support for an open, inclusive, rules-based trade and investment arrangement, " said the leaders.

The RCEP "represents an important step forward towards an ideal framework of global trade and investment rules," they said.

The signing of the deal is "a victory of multilateralism and free trade," Chinese Premier Li Keqiang said Sunday as he attended the fourth RCEP Summit in Beijing, held via video link.

"The signing of the RCEP is not only a landmark achievement of East Asian regional cooperation, but also a victory of multilateralism and free trade," Li said.

The global and regional economies are facing huge obstacles and challenges caused by not only COVID-19 but also the decreased global trade, Vietnamese Prime Minister Nguyen Xuan Phuc said at the fourth RCEP summit held prior to the signing ceremony.

The conclusion of the negotiations of the RCEP will "send a strong message of ASEAN's leading role in supporting the multilateral trade system, helping to create a new trading structure in the region, facilitating trade sustainably, developing the disrupted supply chains and supporting post-pandemic recovery," he said.

The RCEP agreement will accelerate the building of the ASEAN Economic Community and thereby allow ASEAN to become dynamic and strong partners in promoting cooperation for shared prosperity, he said later at the signing ceremony held via video conference.

Malaysian Minister of International Trade and Industry Mohamed Azmin Ali said the signing of the RCEP agreement will be a testament to the world on the efforts to strengthen the multilateral trading system and uphold the development agenda in the World Trade Organization (WTO).

"It will also demonstrate to the world that ASEAN together with the ASEAN Free Trade Agreement partners say 'no' to protectionism and 'yes' to free trade," he said.

The RCEP is "a hugely symbolically significant agreement, coming at a time of global trade uncertainty," said Australian Minister for Trade, Tourism and Investment Simon Birmingham.

"It says in a really powerful and tangible way that our region, which has been the driver of global economic growth, is still committed to the principles of trade, openness and ambition," he told the Australian media Sunday.

The signing of the RCEP deal came after more than 30 rounds of negotiations, which were launched in November 2012, as well as a number of specific leaders' and ministerial meetings between the participating countries.

The signing ceremony took place during the ongoing 37th ASEAN Summit and related summits, from Thursday to Sunday via video conferences.