Abstract : With the 2020 China International Fair for Trade in Services (CIFTIS) drawing to a close Wednesday in Beijing, the country has sent a clear signal of its unwavering determination to push for higher-level opening up.

-- The China International Fair for Trade in Services (CIFTIS), the first major international economic and trade event held both online and offline by China since the COVID-19 outbreak, closed on Wednesday in Beijing.

-- Themed "Global Services, Shared Prosperity," the six-day event has attracted 22,000 enterprises and institutions from 148 countries and regions, including 199 Fortune 500 companies.

-- China has pledged to stay committed to further opening up and continues apace in sharing development opportunities with the rest of the world, promoting global service trade as well as the exchanges and cooperation between related industries.

BEIJING, Sept. 9 (Xinhua) -- With the 2020 China International Fair for Trade in Services (CIFTIS) drawing to a close Wednesday in Beijing, the country has sent a clear signal of its unwavering determination to push for higher-level opening up.

As the first major international economic and trade event held by China since the outbreak of COVID-19, this year's CIFTIS has attracted 22,000 enterprises and institutions from 148 countries and regions, including 199 Fortune 500 companies.

The six-day event is one of the world's largest and most comprehensive fairs for trade in services, and saw over 200 achievements of various kinds released.

Provincial-level regions, centrally-administered state-owned enterprises and financial institutions have formed trade groups for the first time, participating in active transactions, with 240 contracts signed, according to Xian Guoyi, an official with the Ministry of Commerce. 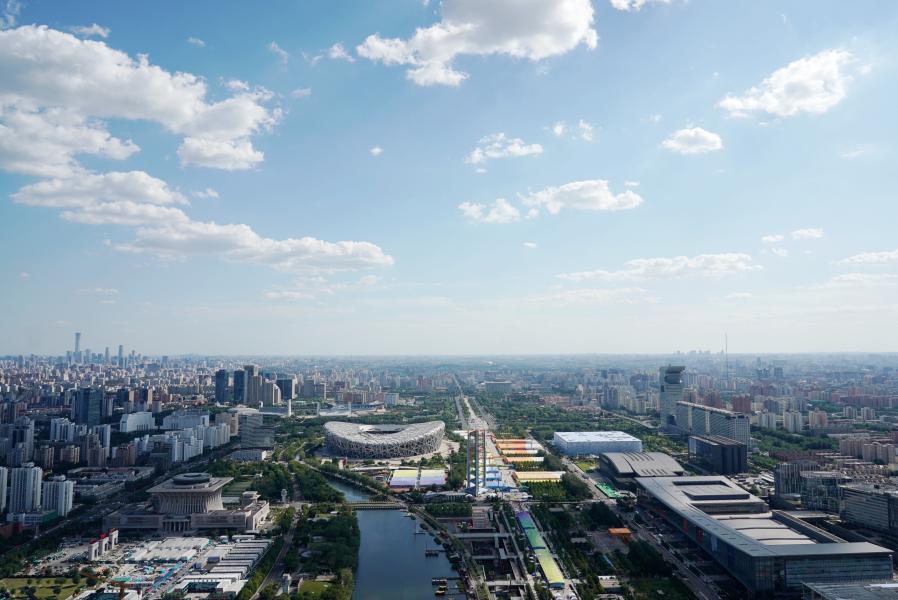 Photo taken on Sept. 9, 2020 shows the cityscape near the main venue and exhibition areas of the 2020 China International Fair for Trade in Services (CIFTIS) in Beijing, capital of China. (Xinhua/Zhang Chenlin)

More than 30 reports, indices and ranking lists have been published during the event, with 63 enterprises and institutions releasing their latest achievements, technologies and service solutions.

Staying committed to further opening up, China is rolling out a slew of measures including the establishment of a negative list for cross-border service trade and the further construction of open platforms for piloting the innovative development of trade in services.

According to a report published by the China Association of Trade in Services, the rapidly developing services sector and services trade have become new drivers of the Chinese economy.

Despite COVID-19 posing serious challenges to the world, China has proved itself to be an important engine of global economic growth, manifesting strong resilience and growing signs of recovery.

"It is a very important signal and symbol in terms of opening up and that we are back in business," said Jochen Goller, president and CEO of BMW Group Region China, noting that CIFTIS 2020 is just what was needed at the moment. 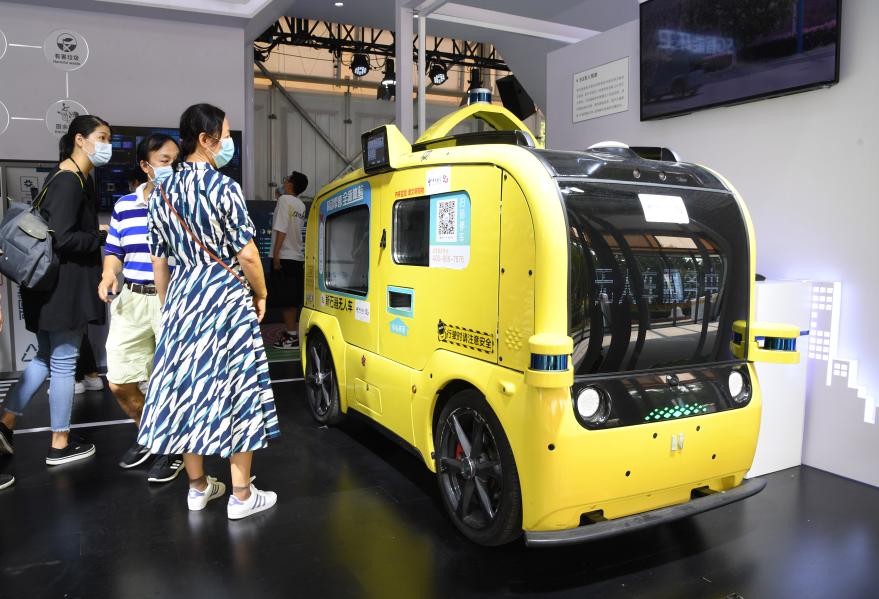 Visitors look at a 5G-enabled unmanned vending vehicle at the 5G communications services exhibition area of the 2020 China International Fair for Trade in Services (CIFTIS) in Beijing, capital of China, Sept. 6, 2020. (Xinhua/Ren Chao)

Ali Obaid Al Dhaheri, UAE ambassador to China, said the theme of this year's CIFTIS -- Global Services, Shared Prosperity -- is an expression of how the event has evolved into an open, inclusive and diversified fair, supporting trade liberalization and economic globalization.

The fair is advancing trade and services in China and has become an event fit for China's increasing internationalization, injecting additional momentum into high-quality economic development, he said, noting that events like the CIFTIS are greatly valued at this time of economic challenges and offer the world an opportunity to get business moving again.

Against the backdrop of the pandemic-rattled global economy, many participants from home and abroad have seen opportunities from the CIFTIS, as China has pledged to stay committed to further opening up and continues apace in sharing development opportunities with the rest of the world.

"Although the COVID-19 pandemic has created a huge impact on the global tourism market, we are still very positive on the business environment of the Chinese market and the global tourism industry," said Tom Mehrmann, president and general manager of Universal Beijing Resort, which is under construction in the eastern suburbs of the city, including the highly anticipated Universal Studios Beijing theme park, the Universal CityWalk and two hotels.

"We have great confidence in China's economy and the cultural and tourism industry, and will continue to develop our business in China in the future and deepen the cooperation with local partners," he said. "The ever-optimizing policies allowed us to focus on innovation, service, talent training and sustainable development in China." 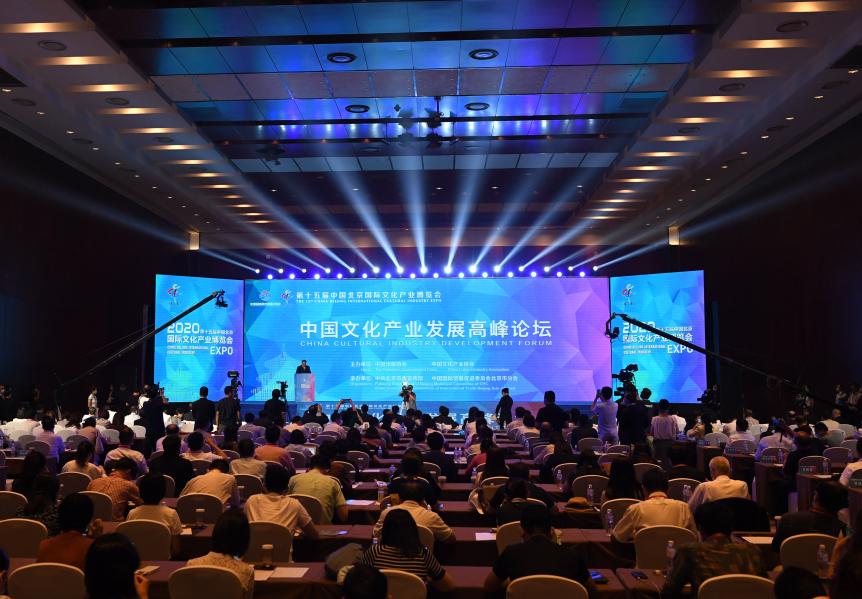 Zuzanna Gutkowska, acting director of the Polish National Tourist Office in Beijing, has pinned high expectations on the trade fair to boost the tourism recovery in Poland.

"Due to the pandemic, China to Poland tourism has been fully affected. We are desperate to see the Chinese travel agencies restart their group tours in Poland. The CIFTIS has provided a very good platform for me to discuss the future cooperation and development plan with our partners," she said.

China has sent very clear signals of an unswerving push for wider opening up at the CIFTIS, which is conducive to cooperation in various industries.

"China is the second-largest overseas market of Air France KLM and the largest in Asia. We are delighted and honored to resume our passenger flights to China, which marks a big step in rebuilding our global network," said Toon Balm, general manager of Air France KLM Greater China.

Via the CIFTIS, the Shanghai-based cloud computing firm UCloud Technology Co., Ltd. demonstrated its global data center layout, the strength of the Chinese cloud computing industry and its confidence to provide better service and support for companies from home and abroad, according to Ji Xinhua, UCloud's founder and CEO.

Since the pandemic continues to wreak havoc around the world, many participants have opted to attend the fair online.

Snow 51, a prominent ski education and retail platform and the only official partner of the Austrian Schild Ski Racing School in China, is putting ski machines in more cities and providing ski training services for skiers.

The institution has displayed its ski simulators at the CIFTIS. 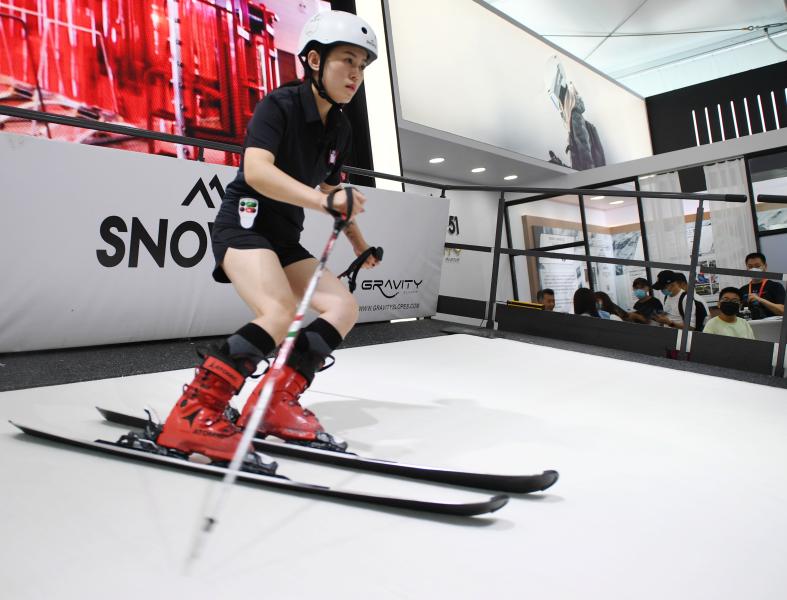 A staff member demonstrates the use of skiing simulation device during the the 2020 China International Fair for Trade in Services (CIFTIS) in Beijing, capital of China, Sept. 6, 2020. (Xinhua/Zhang Chenlin)

"China has a vast market and there are many diverse demands leading to many business opportunities. We have launched ski simulating machines indoors no matter in ski resorts or shopping malls to meet the needs of more southern customers," said Hermann Winkler, co-founder of Snow 51, who attended the World Winter Sports (Beijing) Expo via video link during the CIFTIS.

"Through the opportunity of the trade fair, we have reached more interested buyers," Winkler said.

According to the plan of Snow 51, China's economy has recovered and with the opportunity presented by the Beijing Winter Olympics, it is expected to open new stores in Hangzhou and Ningbo at the end of this year and come to Beijing early next year.

On Sept. 7, the city of Beijing received approval from the State Council to expand opening up in the service industry and build a national comprehensive demonstration zone to further such efforts.

According to an online statement issued by the State Council, Beijing should work to provide a demonstration zone for the opening up and innovative development of the country's service industry.

The demonstration zone is expected to facilitate trade, investment, cross-border flow of capital, employment, transportation, as well as the safe and orderly flow of data by 2030.

The plan was released during the CIFTIS, which reflects high hopes for the wider opening up of Beijing's service industry, said Zheng Wei, a researcher with the Chinese Service Outsourcing Research Center affiliated to the Ministry of Commerce (MOC).

"It is not only a concrete measure to implement the opening-up commitment of the fair, but also an important force to drive the high-quality development of China's service industry and form a new pattern of reform and opening up at a higher level," said Zheng.

Li Jun, director with the Institute of International Trade in Services under the MOC, said the plan draws a clear path for the wider opening up of the city's pillar industries such as finance and internet information, highlighting Beijing's advantages and characteristics.

Statistics from the Beijing municipal commerce bureau show that a total of 667 new foreign-funded enterprises had been set up in the city by the end of July. And the actual use of foreign capital reached 8.44 billion U.S. dollars during the first seven months of the year, accounting for 11 percent of the nation's total.

"The complicated international environment and great challenges that global trade and investment are facing have not abated enterprises' demand for globalization," said Yan Ligang, the bureau head. 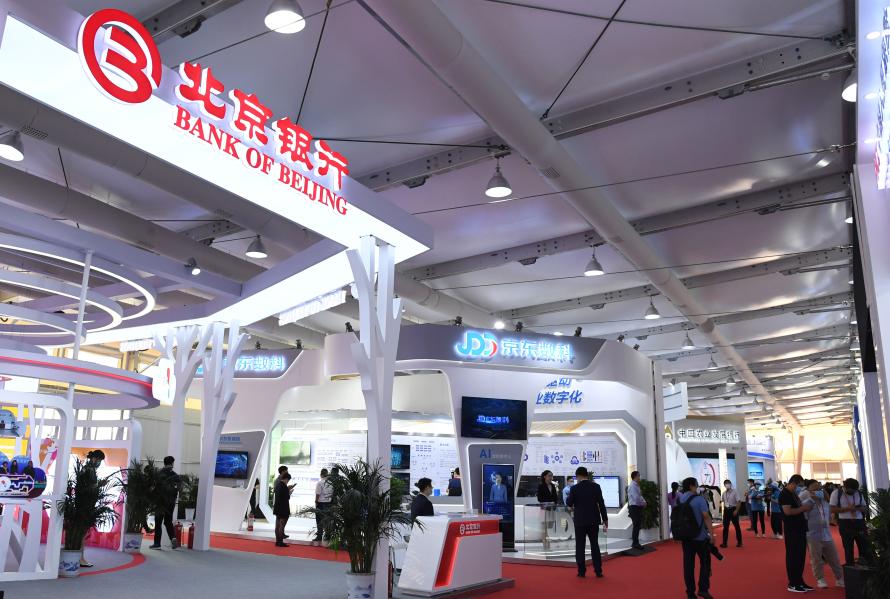 Beijing's institutional innovation in further opening up the service sector plays a leading and demonstrative role and will set an example for the rest of the country to follow, said Bai Ming, deputy director of the International Market Research Department under the MOC. "This will provide a solid foundation for the development of service trade between China and other countries, as well as the exchanges and cooperation between related industries."

Chen Nan, director of government affairs at Canon Medical, appreciated Beijing's continuous efforts to open up its service sector in recent years, which brought convenience to the company in terms of customs clearance and the introduction of foreign expertise.

"We are looking forward to the new policy and are more optimistic about the Chinese market," said Chen.

3.
Hong Kong markets come out of 2020 stronger than ever: HKEX chairperson

With the 2020 China International Fair for Trade in Services (CIFTIS) drawing to a close Wednesday in Beijing, the country has sent a clear signal of its unwavering determination to push for higher-level opening up.