Abstract : The Baltic Exchange has published its weekly report of the dry and tanker markets for June 1-5, 2020.

BEIJING, June 8 (Xinhua) -- The Baltic Exchange has published its weekly report of the dry and tanker markets for June 1-5, 2020 as below:

The small flicker of hope at the beginning of this week has kindled a small fire under the Capesize market. At a paltry $3,369 from the beginning of the week, the Capesize 5TC has lifted to $7,307 with momentum continuing to build. Led by strong iron ore demand, the fronthaul long ton mile business has heeded the call. The transatlantic business, in contrast, continues to severely lag other regions, giving a strong indication of the continuing weak industrial output owing to COVID-19. The transatlantic C8 closed the week up 875 to $4,075 with some suggesting that level to be quite generous considering the serious lack of business. The Pacific basin - and in particular iron ore from Western Australia to China - had strong activity for the second half of this week catching some by surprise. The C5 West Australia to Qingdao opened the week at $4.123 to close at $5.473. Fuel price increase had its part to play this week, lifting voyage prices. But once momentum had built, rates quickly outpaced.

A better week all round, with the timecharter average climbing $345 on the week to Thursday. This was driven predominantly by both the US Gulf, and EC South American fronthaul markets, with P2A gaining $759 on the week to Thursday, whilst the underlying voyage routes both posted gains of $1.06, and $0.76 respectively. In the latter stages of the week, Kamsarmaxes were earning in the region of $12,750 plus $275,000 ballast bonus for an EC South America fronthaul. The Caravos Triumph (81,664 2012) reported fixed to Bunge basis mid-June dates, being a fair representation. Meanwhile, from the US Gulf, the Twinkle Island (82,265 2012) was reportedly fixed to Norden basis delivery Immingham prompt dates, in the region of $12,500. The period market also witnessed a little activity in the Pacific, with both the KM Shanghai (80,529 2014), and KM Keelung (82,072 2010) reportedly having taken cover for 6-9 months at $9,750 – consistent with the FFA market.

BSI started in negative mode - but as it ended this trend reversed. Period activity, however, remained limited as both sides watched developments. The Atlantic saw increased activity from key areas such as east coast south America and the US Gulf. A 63,000dwt was fixed delivery Recalada trip to west coast south America at $13,000. From the Mediterranean, a 62,000dwt was fixed delivery Izmir trip to west Africa in the low $7,000s. With demand for tonnage strong from the Indian Ocean, rates pushed further. A scrubber fitted 61,000 was fixed delivery Philippines trip via South Africa redelivery Vietnam at $9,500. Further east demand remained a 56,000-dwt fixing delivery Kosichang for a trip via Malaysia, redelivery south China, in the mid $8,000s and a 57.000dwt open Dalian fixed a trip via Philippines redelivery China with nickel ore in the low $7,000s. All eyes are focused on the upcoming week to see if these trends are sustained.

Despite being low compared with the same period last year, the BHSI has been consistently improving since mid May. The US Gulf route HS4 proved the exception, finally showing the first sign of improvement since end March. But the market still saw limited cargo from the Gulf, with a long tonnage list. There was talk of better rates from the Continent, but the same trait was not noticed for vessels open in the Mediterranean. In the East, the market further strengthened with a shortage of vessel supply in south east Asia. Stems from Australia and steels from east coast India lent support and pushed rates higher. A 39,000dwt was fixed basis Rouen delivery for a trip to east Mediterranean at $4,750. Mid-sized Handysizes were fixed in the $4,000s from north China for a CIS round voyage or similar level from south China for a northbound trip.

Charterers were firmly in the driving seat this week as owners' resistance proved futile. In the Middle East Gulf, rates for 75,000mt to Japan lost over 30 points to sit now at barely WS75. It was a similar story on the LR1s with the few enquiries in the market seeing charterers spoilt for choice. Rates are now at best in the low/mid WS 80s, in contrast to the WS120 region assessed at the start of the week. Owners plying the 37,000mt UKC to USAC trade also had to contend with stiff competition and rates lost around 7.5 points here with the last seen being Repsol fixing at WS125 for North Spain loading. The 38,000mt backhaul trade from US Gulf to UKC provided the only crumbs of comfort for owners with rates steady throughout the week in the low WS90s. The 30,000mt clean cross-Med trade came under renewed downward pressure and eased from WS 146.25 to barely WS 140 region. And, with the tonnage list continuing to grow and charterers in no rush to fix, brokers feel there is potential for further weakening in the market.

Another fairly active week in the Middle East. However, owners were powerless to stem the bleeding of rates. For 270,000mt to China rates fell 10 points to WS55. Voyages of 280,000mt to USG via cape/cape routing are assessed about three points lower at WS32.5-33 level. In West Africa, little activity was seen in the market for 260,000mt to China with the route being rated five points lower than a week ago at WS58. The market for 270,000mt USG/China voyages is being assessed $900k higher, at $7.5m region.

Another pitiful week for owners across all sectors with charterers able to take control while owners were falling over each other to find cargoes to fix. In the Mediterranean, 80,000mt Ceyhan/Med is now at W70, down 11 points from a week ago. In Northern Europe, 80,000mt Cross North Sea is now WS76.5 representing a drop of 16 points, while 100,000mt Baltic/UKC is similarly down to WS57.5. Across the Atlantic, in the 70,000mt Carib/USG market, rates fell 14 points to low WS60s while for 70,000mt USG/UKC fixing levels collapsed 20+ points to mid WS50s. 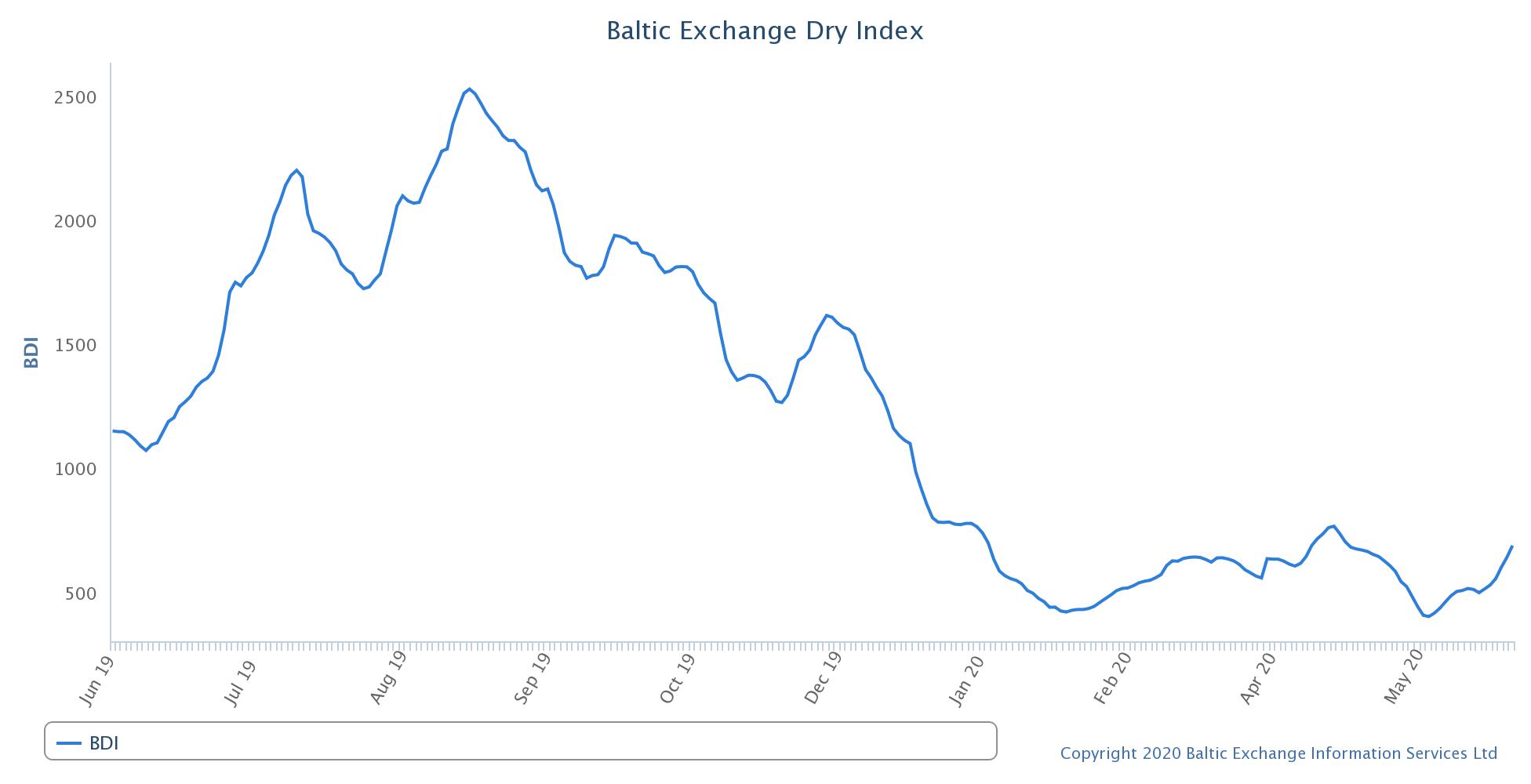 2.
China's Ministry of Commerce issues development plan for FDI use

The Baltic Exchange has published its weekly report of the dry and tanker markets for June 1-5, 2020.