Abstract : San Marino hopes to sign the memorandum of understanding on the Belt and Road Initiative (BRI) with China soon.

San Marino hopes to sign the memorandum of understanding on the Belt and Road Initiative (BRI) with China soon. 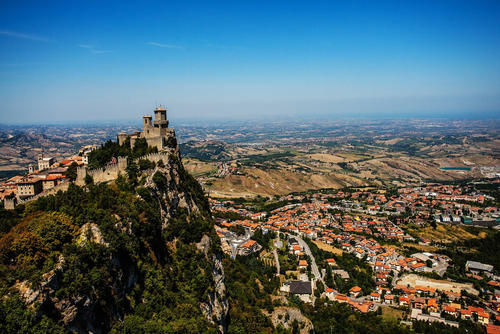 San Marino, small republic situated on the slopes of Mount Titano, on the Adriatic side of central Italy between the Emilia-Romagna and Marche regions and surrounded on all sides by the republic of Italy. It is the smallest independent state in Europe after Vatican City and Monaco and, until the independence of Nauru (1968), the smallest republic in the world.

San Marino has an irregular rectangular form with a maximum length of 8 miles (13 km), northeast to southwest. It is crossed by the Marano and Ausa (Aussa) streams, which flow into the Adriatic Sea, and by the stream of San Marino, which falls into the Marecchia River. The landscape is dominated by the huge, central limestone mass of Mount Titano (2,424 feet [739 metres]); hills spread out from it on the southwest, whereas the northeastern part gently slopes down toward the Romagna plain and the Adriatic coast. The silhouette of Mount Titano, with its three summits crowned by ancient triple fortifications, may be seen from many miles away. In 2008 Mount Titano and the historic centre of San Marino were designated a UNESCO World Heritage site.

The San Marino constitution, originating from the Statutes of 1600, provides for a parliamentary form of government. The Great and General Council (Parliament) has 60 members, elected every five years by all adult citizens. It has legislative and administrative powers and every six months nominates the two captains regent (capitani reggenti), who hold office for that period and may not be elected again until three years have elapsed. The Great and General Council is headed by the captains regent, who are heads of state and of the administration. The Congress of State, a council of ministers, is composed of 10 members, elected by the Great and General Council from among its members, and constitutes the central organ of executive power. Each member has charge of a ministerial department.

Although traces of human presence from both prehistoric and Roman times exist in the territory, Mount Titano and its slopes are known to have been populated, with certainty, only after the arrival of St. Marinus and his followers. San Marino citizens, or Sammarinesi, make up more than four-fifths of the country’s population, with Italians composing most of the remainder. Thousands of Sammarinesi reside abroad, principally in Italy, the United States, France, and Argentina. Nearly nine-tenths of San Marino’s citizens are Roman Catholics, though there is no official religion. The official language is Italian. A widely spoken dialect has been defined as Celto-Gallic, akin to the Piedmont and Lombardy dialects as well as to that of Romagna.

Because centuries-long quarrying has exhausted Mount Titano's stone and ended the craft that depended upon it, the territory is now without mineral resources. All electrical power is transferred via electrical grid from Italy, San Marino's main trading partner. The country's principal resources are industry, tourism, commerce, agriculture, and crafts. Manufactures include electronics, paint, cosmetics, ceramics, jewelry, and clothing. Ceramic and wrought-iron articles, as well as modern and reproduction furniture, are among San Marino's traditional craft products. Fine printing, particularly of postage stamps, is a consistent source of revenues. Banking is a vital industry. In 2002, San Marino replaced the Italian lira with the euro as its national currency.

Tourism is the sector of greatest expansion, and it makes a major contribution to the inhabitants’ income. Alongside traditional excursion tourism, there is convention-type tourism, based on modern hotel facilities, as well as residential tourism.

Agriculture, although no longer the principal economic resource in San Marino, remains vital. Wheat, grapes, and barley are the chief crops; dairying and livestock also are important. About three-fourths of the land is given to permanent cultivation.

San Marino hopes to sign the memorandum of understanding on the Belt and Road Initiative (BRI) with China soon.