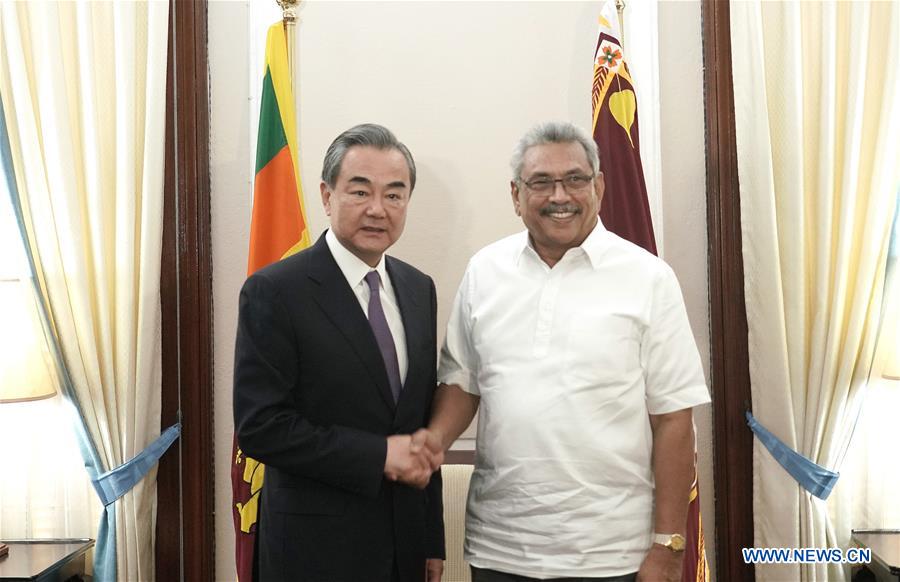 Sri Lanka has attached utmost importance to developing ties with China as it is a trustworthy and long-term cooperative partner of Sri Lanka, the Sri Lankan president said, expressing gratitude to China for its support for Sri Lanka's socio-economic development.

The Sri Lankan government fully supports the development of major projects such as the Colombo Port City and the Hambantota Port, Sri Lankan Prime Minister Mahinda Rajapaksa said, noting that these projects will not only help develop the country's economy and improve people's livelihood, but also become a major driving force for the friendly cooperation between the two countries.

He also called for closer coordination and cooperation between the two countries in international affairs.

For his part, Wang said China and Sri Lanka are good friends and partners who always support and help each other. China will continue to firmly support Sri Lanka in safeguarding its sovereignty and national dignity.

China is willing to further consolidate political mutual trust, strengthen high-level exchanges and deepen practical cooperation between the two countries, so as to push for further promotion of their strategic cooperative partnership.

The senior Chinese official called for discussion on jointly forging the China-Sri Lanka community with a shared future which features sharing opportunities and outcomes and enjoying common development and prosperity.

China and Sri Lanka should speed up the high-quality Belt and Road cooperation, develop the Colombo Port City and the Hambantota Port into two major engines for the fast development of the Sri Lankan economy, Wang said.

Wang also called on the two sides to strengthen exchanges and cooperation in the fields of agriculture, technology, education and tourism.

He said China will encourage more Chinese enterprises to invest in Sri Lanka and help the country build shipping and logistic hubs as well as industrial and financial centers in the region.

China-Sri Lanka cooperation has never targeted at any third party and also it should not be affected by any third party, Wang said, stressing that deepening cooperation between China and Sri Lanka will surely be conducive to the peace and development of the region.