Abstract : In an otherwise turbulent world fraught with uncertainties, China's steadily expanding economy came as a relief and once again proved its key role in powering global growth. 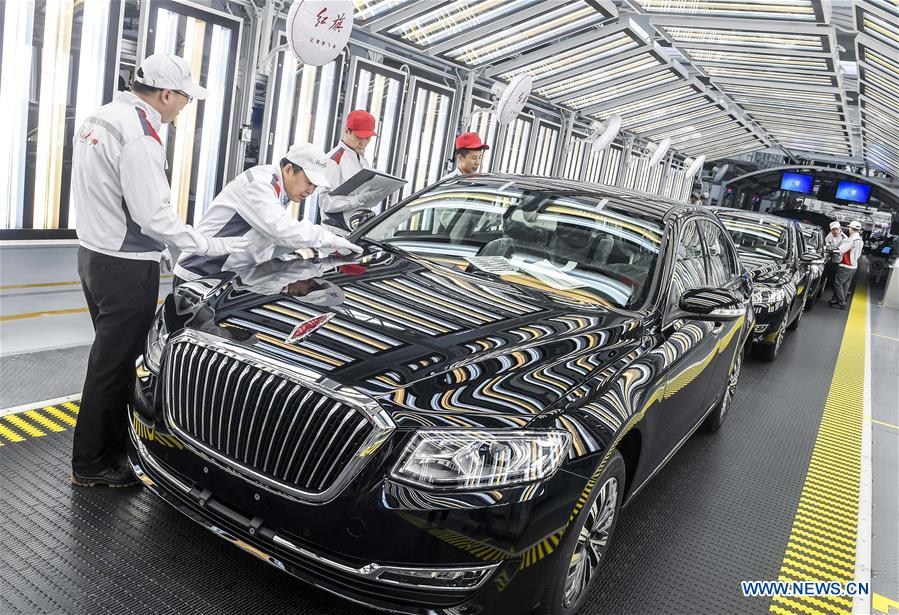 Staff members check FAW's Hongqi cars in an assembly workshop in Changchun, capital city of northeast China's Jilin Province, April 9, 2019. China's GDP expanded 6.3 percent year on year in the first half of 2019 to about 45.09 trillion yuan (about 6.6 trillion U.S. dollars), data from the National Bureau of Statistics showed Monday. The growth was in line with the government's annual target of 6-6.5 percent set for 2019. In the second quarter, the country's GDP rose 6.2 percent year on year, lower than 6.4 percent in the first quarter, according to the data. (Xinhua/Xu Chang)

BEIJING, July 15 (Xinhua) -- In an otherwise turbulent world fraught with uncertainties, China's steadily expanding economy came as a relief and once again proved its key role in powering global growth.

Data from the National Bureau of Statistics showed the economy grew 6.2 percent in the second quarter of the year, retreating from the 6.4-percent expansion in Q1.

In the first half, growth came in at 6.3 percent, within the government's stated goal of between 6 percent and 6.5 percent for 2019.

While the headline data offered a broad measure on growth, simply dwelling on the figure would be understating the challenges and hardships the country had undergone to keep the economy on the right track.

Worse still, China and the United States have been locked in drawn-out trade tensions since last year, which brought increasing uncertainties to global growth given the world's two largest economies' outsized role in international trade and finance.

It was against such headwinds that the country managed to deliver 6.3-percent growth, and the result was hard won.

Newly-introduced tax cuts and fees reductions have saved businesses by around 893 billion yuan (about 130 billion U.S. dollars) in the first five months. The improving business sentiment, in turn, encouraged investment and boosted consumption and trade.

The private sector got special attention. In April, China's central authorities pledged more measures on SMEs financing difficulties, including the creation of more financing channels and encouraging small firms to seek funding on the "new third board."

The country adopted a targeted cut in reserve requirement ratio (RRR) for some small and medium-sized banks in three phases to support private as well as micro and small enterprises. The third phase of the RRR cut is scheduled to take effect on Monday.

Spurred by the government campaign for mass innovation and entrepreneurship, the Internet-led "new economy" is becoming a more prominent source of growth and picking up the slack when traditional drivers are losing steam.

Dealing with trade frictions provoked by the U.S., China, a staunch supporter of globalization, has been committed to seeking win-win solutions and choosing to open its door wider for the benefit of both itself and the world at large.

In June, the Shanghai-London Stock Connect program was officially launched, and China's A-shares were included in the FTSE Global Equity Index Series as planned.

The government also decided to remove caps on foreign ownership of brokerages, futures dealers and life insurers by 2020, a year ahead of the previous plan.

With its fast economic rise over the past decades built upon ceaseless reforms and opening-up, China knows all too well that it should stick firmly on the right path.

With the maturing Chinese economy and its increasing interactions with the world, uncertainties and troubles are inevitable. But with clear direction, the world can count on China to be a responsible mainstay for sustained growth for many years to come.

In an otherwise turbulent world fraught with uncertainties, China's steadily expanding economy came as a relief and once again proved its key role in powering global growth.