Abstract : China's innovation-driven development has yielded fruitful results during the 13th Five-Year Plan period (2016-2020), and science and technology (sci-tech) has become a key driver for the country's economic and social development.

BEIJING, Dec. 16 (Xinhua) -- China's innovation-driven development has yielded fruitful results during the 13th Five-Year Plan period (2016-2020), and science and technology (sci-tech) has become a key driver for the country's economic and social development.

In the Global Innovation Index (GII) reports released by the World Intellectual Property Organization (WIPO), China's ranking has risen from 25th in 2016 to 12th in 2021. Over the past five years, 2.13 million sci-tech achievements nationwide realized technology transactions, 1.52 times the number during the 12th Five-Year Plan period (2011-2015). 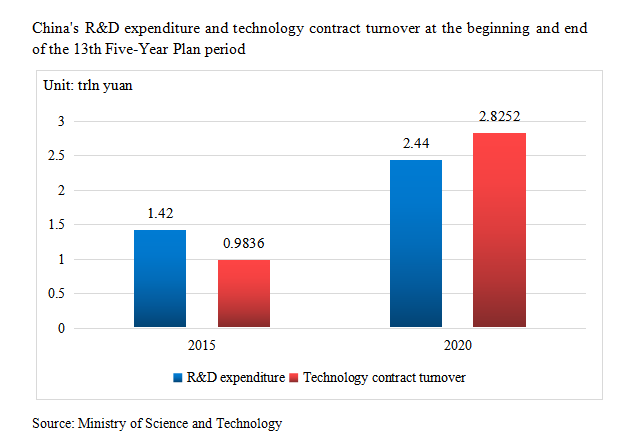 During the 14th Five-Year Plan period (2021-2025), China will continue to vigorously promote sic-tech innovation to create new advantages for development, and meanwhile to expand sci-tech cooperation globally with the aim to build a community of a shared sci-tech future.

This year marks the first year of the 14th Five-Year Plan period. The Outline of the 14th Five-Year Plan for National Economic and Social Development and the Long-Range Objectives Through the Year 2035 proposes to uphold the central role of innovation in China's overall modernization drive and make self-reliance in sci-tech a strategic support for national development.

Jiangsu, Zhejiang and Hubei provinces will expedite the construction of regional sci-tech innovation centers, while Hebei, Sichuan and Shandong provinces, Chongqing Municipality and the Yangtze River Delta region will promote high-quality development with innovation communities and clusters of emerging industries as the focus.

To further promote sic-tech innovation, the Committee for Deepening Overall Reform of the CPC Central Committee on November 24 approved a 2021-2023 sci-tech system reform plan proposing improving the sci-tech structure, giving play to the principal role of enterprises in sci-tech innovation, promoting a virtuous circle of sci-tech, industry, and finance, and accelerating the commercialization and application of sci-tech achievements.

During the 14th Five-Year Plan period, efforts will be made to strengthen basic research and original innovation, support the development of emerging, unpopular and weak disciplines, push forward interdisciplinary integration and research, deploy the innovation chain around the industrial chain, the industrial chain around the innovation chain, and leverage new science and new technologies to help foster new industries and new economies, said an official with the Ministry of Science and Technology.

In the first year of the 14th Five-Year Plan period, China has continued to advance basic research and breakthroughs in key and core technologies, with a great number of innovation results achieved.

This year has witnessed the rapid development of strategic emerging industries in China. The first homemade large aircraft production and test flight center was completed; consumer drones account for more than half of the global market; the production and sales of new energy vehicles hit a new record high; China's voice in the global LCD panel industry is increasing; more than 70 percent of the world's 5G base stations have been completed ... A series of new inventions, new technologies and new products are speeding up the formation of new engines for high-quality development and pushing the medium-high end transformation of industries.

Since the beginning of this year, China's intellectual property protection system has been further improved, with knowledge-based incentive policies deeply implemented, and the commercialization of sci-tech achievements continuing to flourish. From January to October, 583,000 invention patents were granted, and the investment in services for commercialization of sci-tech achievements increased by 13.6 percent.

From January to August this year, the national high-tech zones, driven by innovation, showed strong resilience in economic development, recording an operating revenue of 29.5 trillion yuan, up 21.9 percent year on year.

Since the beginning of this year, China has introduced a series of preferential policies for additional deductions on taxable R&D expenses, and continuously released tax dividends. According to data from the State Taxation Administration (STA), by the end of October, enterprises across China had enjoyed 1.3 trillion yuan of additional deductions in advance or 333.3 billion yuan of tax cuts or exemptions.

The COVID-19 nucleic acid test kit manufacturing plant in Ethiopia is a microcosm of BGI Genomics Co., Ltd.'s contribution to the global fight against COVID-19. BGI Genomics Co., Ltd. (300676.SZ), a company based in Shenzhen, Guangdong, has built 10 Huoyan, or Fire Eye laboratories in Gabon, Togo, Ethiopia, Angola, Botswana and Guinea as of the first three quarters of this year.

"We not only export testing technology and equipment, but also provide services such as training and technical support to local laboratory staff. Chinese and foreign technicians work together to identify COVID-19 variants and test nucleic acid samples using advanced technologies," said Cao Wei, director of international public affairs at BGI Genomics Co., Ltd., adding that the company operates over 90 Fire Eye laboratories in more than 30 countries and regions around the globe.

As of October 17, China had provided more than 1.5 billion doses of COVID-19 vaccines to 100-odd countries and international organizations. It will continue to provide more safe and effective vaccines to the world, especially to developing countries.

China's Five-hundred-meter Aperture Spherical Radio Telescope (FAST) is the world's largest and most sensitive single-aperture radio telescope, capable of receiving electromagnetic signals from more than 10 billion light years away. From March 31 this year, the FAST began soliciting observation applications from astronomers around the world, and as of mid-November, more than 30 applications have been received, which has become a model of international sci-tech cooperation and exchange.

Li Yingbo, an associate professor at the School of Public Policy and Management of Tsinghua University, said that China's innovative development has had a great spillover effect. For example, Li added, vaccines developed in China have not only helped prevent and control the epidemic at home, but also helped protect the health of people around the world, and China's pioneering efforts in quantum technology and space exploration will paint a better picture for the sci-tech progress of mankind.

"In the eyes of some Western politicians, innovation means a zero-sum game. However, the Chinese government is guided by the vision of a community with a shared future for mankind in promoting innovative development. This is of great significance for promoting global economic development and improving the well-being of people around the world," said Li.

With the continuous growing sci-tech strength and the further construction of large-scale scientific research infrastructure, China will actively foster and launch new major international scientific programs centering onspace science, brain science, environmental science, etc., and attract outstanding scientists from all over the world to conduct joint research, with the aim to make greater contribution in promoting scientific cognition and technology innovation of mankind.

China's innovation-driven development has yielded fruitful results during the 13th Five-Year Plan period (2016-2020), and science and technology (sci-tech) has become a key driver for the country's economic and social development.