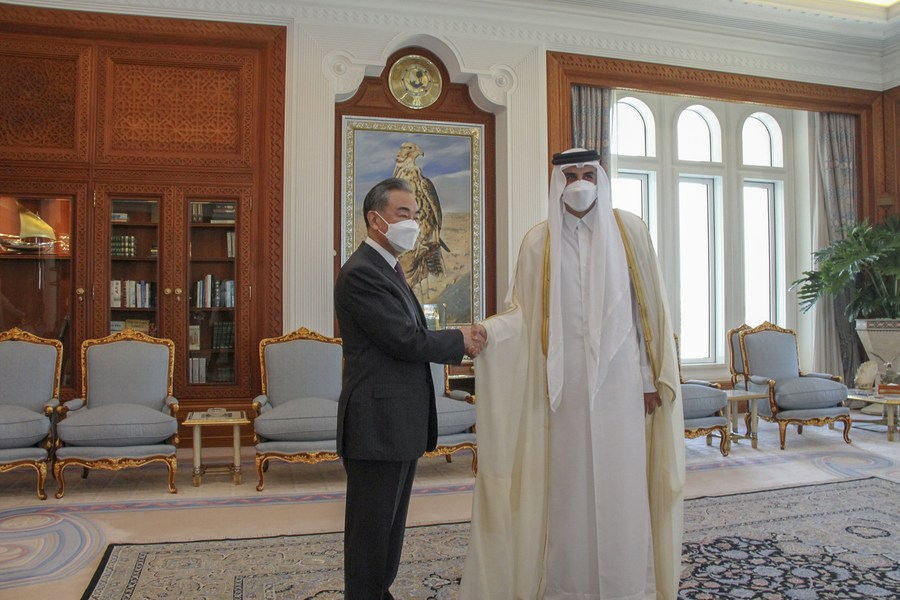 "Under the strategic guidance of the leaders of the two countries, the China-Qatar relations have sustained sound and steady development," Wang said, adding that China always believes that all countries in the world, big or small, are equal members, and all civilizations should respect mutually, learn from each other and achieve common development.

China appreciates Qatar's fairness in international affairs as well as its understanding of and support to China's legitimate position, he said.

Wang expressed China's willingness to strengthen strategic cooperation with Qatar, jointly safeguard multilateralism, oppose unilateralism, and promote the building of a new type of international relations and a community with a shared future for mankind.

Noting that the Chinese and Qatari economies are highly complementary, Wang hailed the great benefits brought to both sides by the deepening practical cooperation in the fields of energy, infrastructure, equipment manufacturing and industrial parks.

He said that China is ready to continue its all-round strategic cooperation with Qatar and help the Gulf state speed up the path of economic diversification and improve its capability of independent development.

China is also willing to expand mutual investment with Qatar, and welcomes the Qatari side to actively participate in China's high-level opening-up and make good use of the opportunities offered by China's super large-scale market.

Wang briefed the Qatari emir on the important speech delivered days ago by President Xi on China's democratic politics.

The speech has elaborated on the rich content, theoretical foundation, and practical function of the whole-process people's democracy in China, Wang said, stressing that democracy is the universal value of all mankind.

Saying that the nature of democracy is to integrate a country's national conditions with the needs of its people, Wang emphasized it is in itself undemocratic to use a single yardstick to examine whether a country is democratic since "democracy is not a patent of any country."

History has repeatedly proved that imposing subjective will on others and trying to transform other countries will inevitably lead to chaos and failure, he said. 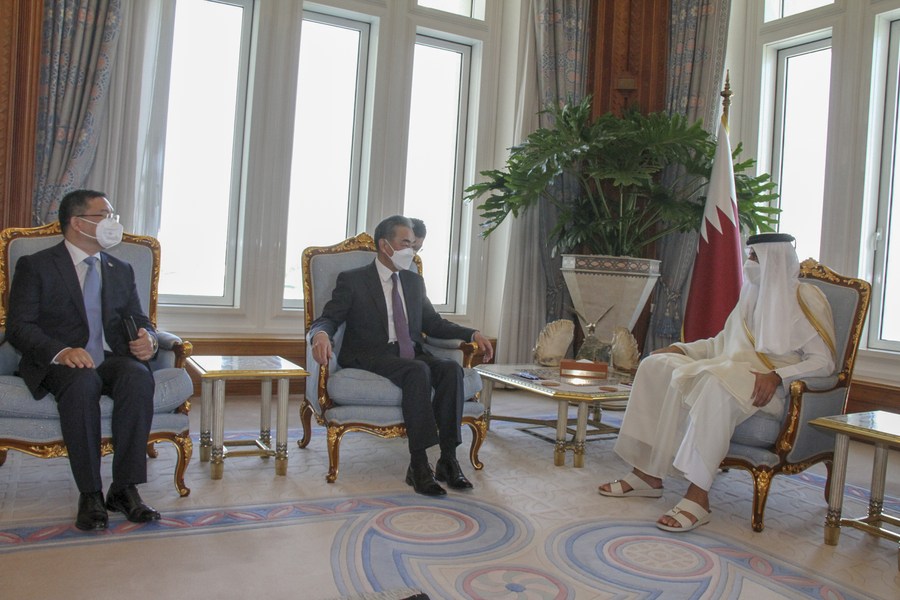 For his part, the Qatari emir asked Wang to convey his sincere greetings to Xi, while hailing the Chinese president's important remarks on democracy as very incisive.

China, as a major power with extensive international influence, is also an important strategic partner of Qatar, he said, noting that the two countries share the same or similar views on international and regional affairs and maintain close communication and coordination.

Qatar, firmly committed to developing friendship with China and opposing any country's interfering in China's internal affairs, is willing to elevate the bilateral relations to a new height, said the Qatari head of state.

He voiced his country's willingness to expand investment and cooperation with China and serve as a long-term and stable energy supplier to China.

More Chinese enterprises are welcome to invest in Qatar and participate in the construction of the Qatar Free Trade Zone, he added.

The two sides also exchanged views on supporting each other in successfully hosting the upcoming Beijing Winter Olympics and the Doha World Cup.

The Qatari emir thanked Chinese enterprises for building the main stadium of the World Cup finals as scheduled, while reiterating Qatar's position against the politicization of sports.

He reaffirmed Qatar's support to Beijing's hosting the Winter Olympics, which he believed will be as wonderful and successful as the 2008 Beijing Olympic Games.