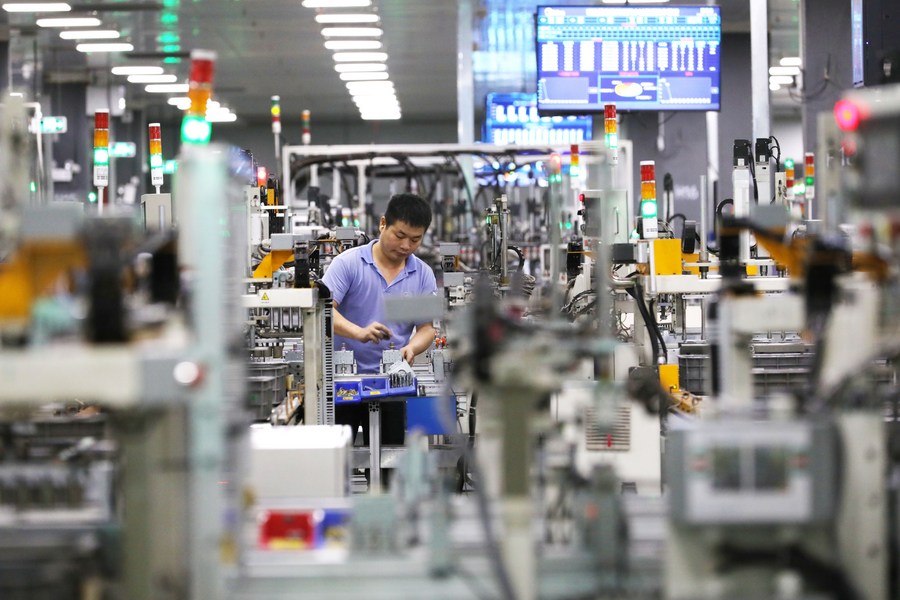 The purchasing managers' index (PMI) for China's manufacturing sector came in at 50.4 in July, edging down from 50.9 in June, data from the National Bureau of Statistics (NBS) showed.

A reading above 50 indicates expansion, while a reading below reflects contraction.

The growth of China's factory activity slowed in July, but the PMI reading of most industries remained in the expansion zone, NBS senior statistician Zhao Qinghe said, attributing the slowdown to factory equipment maintenance and extreme weather, including high temperatures and floods.

The country has experienced unusual extreme weather in July. Torrential rain in central China's Henan Province and Typhoon In-Fa in its eastern coastal areas have disrupted normal production and transportation, causing damage in the country and triggering emergency responses.

The new export order and import sub-indexes decreased to 47.7 and 49.4, respectively.

Saturday's data also showed that the PMI for the non-manufacturing sector came in at 53.3 in July, down from 53.5 in June.

The sub-index tracking business activity expectations for the services sector hit 60.1, remaining above 60 for six consecutive months, showing most services enterprises were optimistic about market prospects in the near term.

Affected by adverse weather conditions, the growth of construction activities in the country slowed, with the sub-index for business activities dipping to 57.5 in July from 60.1 a month earlier.

In a meeting held Friday on economic work for the second half of the year, the leadership stressed that the prudent monetary policy should maintain reasonably ample liquidity and support the continued recovery of small and medium-sized enterprises as well as stressed industries. Efforts should also be made to ensure the supply and stable pricing of commodities, the meeting said.

Wen Tao, an analyst with the China Logistics Information Center, said that the Chinese economy has witnessed positive changes this year, as shown by the January-July PMI data, and has a relatively solid foundation for long-term development.

In the second half of the year, China's domestic demand will be unleashed at a faster pace, which is expected to boost market supply and demand, optimize the industrial structure and create more job opportunities, Wen said. Enditem