Abstract : China and Botswana signed a Memorandum of Understanding (MoU) for cooperation on the Belt and Road Initiative (BRI) on Jan. 7, 2021, making Botswana the 46th partner country in Africa in BRI cooperation

China and Botswana signed a Memorandum of Understanding (MoU) for cooperation on the Belt and Road Initiative (BRI) on Jan. 7, 2021.

Visiting Chinese State Councilor and Foreign Minister Wang Yi and his Botswana counterpart Lemogang Kwape signed the MoU between the two governments after their talks in Gaborone.

This year coincides with the 46th anniversary of the establishment of diplomatic relations between China and Botswana, which is a beautiful symbol, he said.

Botswana President Mokgweetsi Masisi and Minister of International Affairs and Cooperation Lemogang Kwape both congratulated on the signing of the agreement to jointly build the BRI, stressing that it is new progress in China-Botswana relations and will provide new impetus for the cooperation between the two countries.

Botswana, a country in the center of Southern Africa. The territory is roughly triangular—approximately 600 miles (965 km) from north to south and 600 miles from east to west—with its eastern side protruding into a sharp point.

Before its independence in 1966, Botswana was a British protectorate known as Bechuanaland. Since its independence the Republic of Botswana has gained international stature as a peaceful and increasingly prosperous democratic state. It is a member of the United Nations, the Commonwealth, the African Union (AU), and the Southern African Development Community (SADC). The secretariat of SADC is housed in the capital of Botswana, Gaborone. 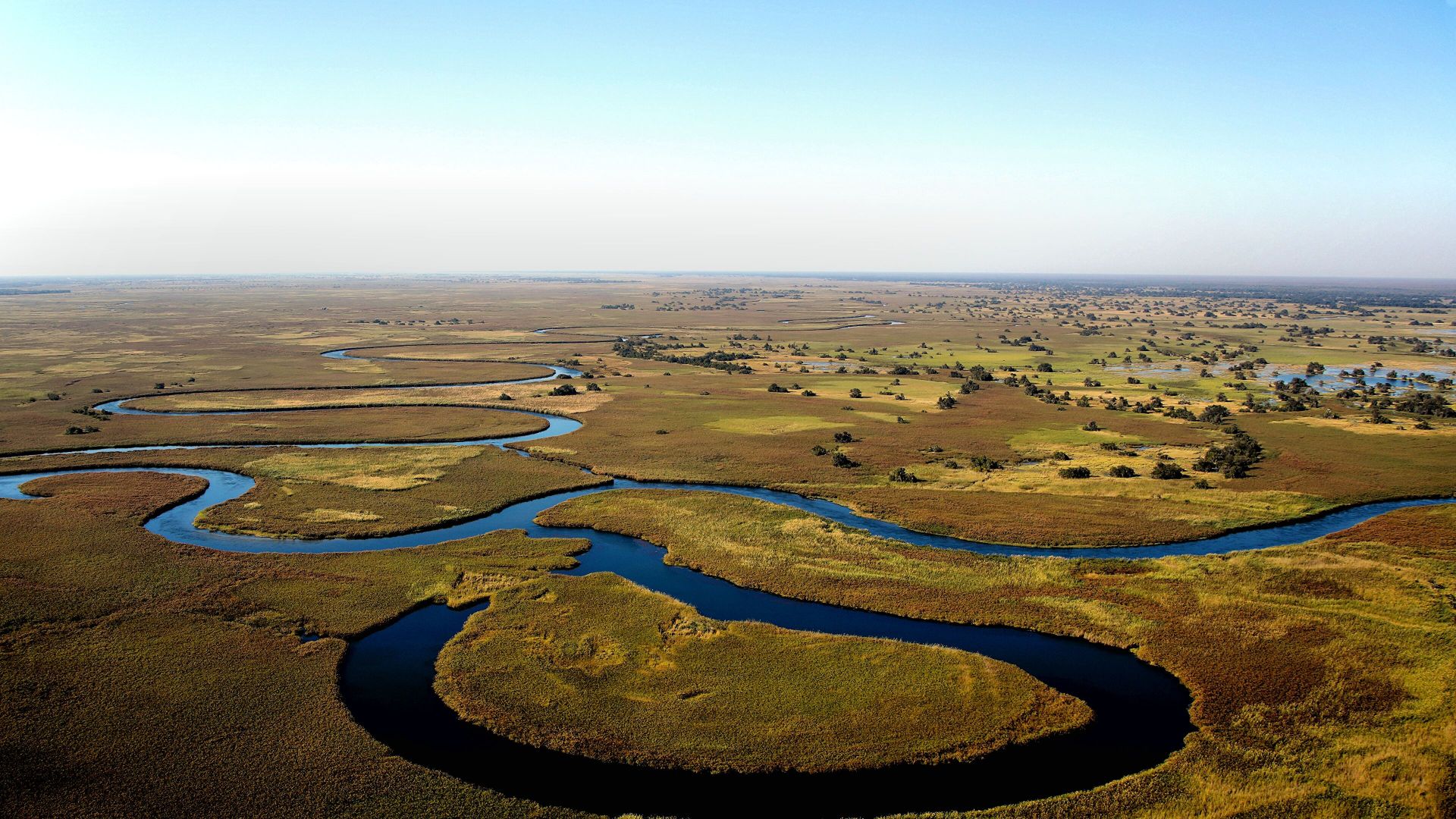 Botswana is bounded by Namibia to the west and north (the Caprivi Strip), Zambia and Zimbabwe to the northeast, and South Africa to the southeast and south.

The country has a mean altitude of 3,300 feet (1,000 metres) and consists largely of a sand-filled basin, with gently undulating plains rising to highlands in neighbouring countries. The highest point is 4,888 feet (1,490 metres) in the hills north of Lobatse in southeastern Botswana; the lowest point is 2,170 feet (660 metres) at the country’s easternmost point, in the Limpopo valley.

The country is divided into three main environmental regions. The hardveld region consists of rocky hill ranges and areas of shallow sand cover in eastern Botswana. The sandveld region is the area of deep Kalahari sand covering the rest of the country. The third region consists of ancient lake beds superimposed on the northern sandveld in the lowest part of the Kalahari Basin.

The annual climate ranges from months of dry temperate weather during winter to humid subtropical weather interspersed with drier periods of hot weather during summer. In summer, which lasts from October to March, temperatures rise to about 93 °F (34 °C) in the extreme north and southwest, the warmest parts of the country. In winter, which lasts from April to September, there is frequent frost at night, and temperatures may fall to near freezing in some high-altitude areas during the day. Summer is heralded by a windy season, the winds carrying dust from the Kalahari, from about late August to early October.

The dominant ethnic identity in Botswana is Tswana, comprising some two-thirds of the population in the 21st century. The country’s whole population is characterized as Batswana (singular Motswana) whatever their ethnic origin.

The national language, Tswana (Setswana, Sechuana), is widely spoken. The official language is English. Several other languages are also spoken in the country, including Kalanga, Sekgalagadi, Herero, Mbukushu, and Yei.

Botswana has a free market economy with a strong tradition of central government planning to provide infrastructure for private investment. The economy has grown rapidly since the mid-1960s, with the gross domestic product per capita increasing more than a hundredfold.

Very little of Botswana’s land is suitable for productive cultivation. Agricultural output constitutes less than one-tenth of the gross national product, and most of that is in the form of livestock production for urban and export markets. Grain production (mostly sorghum, millet, and corn [maize]) fell short of national consumption for most of the 20th century, and foodstuffs from South Africa and Zimbabwe are some of Botswana’s major import commodities. Fishing and forestry production are limited and largely confined to the extreme north.

Botswana is traditionally seen as cattle country. Given sufficient water and pasture and controls on the spread of foot-and-mouth disease from wetland buffalo, it is a healthy environment for raising high-bulk, high-quality indigenous beef cattle.

The government has invested heavily in disease prevention, modern slaughterhouses, and support services for cattle producers. Various schemes—so far unsuccessful—have been attempted to improve range management. Meanwhile, access to Botswana’s main export market for beef, the European Union, improved with the reduction of levies and tariffs in the early 21st century.

Diamonds, the major economic resource of the country, have been exploited on a large scale since 1970. They are mined from some of the world’s largest diamond pipes at Orapa and Letlhakane, south of the Makgadikgadi Pans, and at Jwaneng in the southeastern sandveld. Nickel and copper have been mined at Selebi-Phikwe near the Motloutse River since 1974. Coal is mined for power generation at Morupule near Palapye. Botswana’s other major proven mineral resources are salt and soda ash, which was fully exploited at Sua on the eastern Makgadikgadi Pans from 1991.

Surface water resources are limited to the wetlands and perennial rivers in the north and three major dam lakes at Gaborone, Shashe, and Mopipi (serving Orapa). Underground water is tapped in large quantities near Palapye and south of Gaborone.

The national electric power grid, serving mines and eastern towns, is based on a large coal-powered generating station at Morupule near Palapye, supplemented by connections to the Zimbabwean and South African national grids.

Industrial development in Botswana has been limited by the high costs of power and water, the lack of appropriate management and labour skills, and the small domestic market. Manufacturing activity up to the 1980s largely consisted of meat processing at Lobatse in the south. In the early 1980s capital and textile production were transferred from Zimbabwe to nearby Francistown in Botswana, and diamond sorting and service industries grew in the booming capital city, Gaborone. The growth of the diamond industry continued in the following decades, and in 2008 De Beers S.A. established a sophisticated diamond-sorting and valuing facility in Gaborone, which at the time of its opening was the world’s largest and most sophisticated plant of its kind.

Botswana has had the unusual problems, for a developing country, of a government budget surplus running into billions of dollars and excess capital lying unutilized in private banks. The budget surplus and bank liquidity were partially depleted by diversion into a construction boom in the late 1980s and early ’90s, including infrastructure for new mining operations and military airports. A small stock exchange has been set up. The economy, from diamonds to nickel-copper to soda ash and construction, remains dominated by De Beers S.A.

Tourists are attracted to Botswana by relatively unpopulated and “remote” wetland and thirstland environments. Government policy is to limit the density and environmental impact of tourism through licensing of a limited number of high-cost safari companies.

Domestic trade patterns within Botswana are dominated by large, mostly foreign-owned wholesale operations and large foreign retailers in urban areas, though there is also an increasing proliferation of small stores owned by citizens.

Botswana, along with South Africa, Lesotho, Swaziland, and Namibia, belongs to the Southern African Customs Union (SACU), which allows for the free exchange of goods between member countries. Botswana is also a member of the Southern African Development Community (SADC), a regional organization focused on economic cooperation and integration.

Botswana sends some of its exports to other Southern African countries, but most of its exports are sent to the world market beyond Africa, mainly to Europe. It takes about three-fourths of its imports from its neighbours. Imports consist of machinery and transport equipment, food products, and consumer goods, often manufactured or serviced by multinational companies based in South Africa. Other imports from the rest of the world consist largely of high-technology equipment.

The cultural life of Botswana reflects the dual heritage and intermingling of Tswana and English cultural domination. The two languages and cultures are subtly mixed and alternated in urban and official situations. Western dress has been general among people in Botswana, except at the poorest level, since the late 19th century. Rites of burial, marriage, and birth have been adapted to Christianity and remain extremely important in Botswana life. Football (soccer) is the national sport, played on fields and in stadiums across the country every Saturday.

Common diet and cuisine consist of sorghum and corn (maize) porridge, beans and other pulses, and traditional spinach, supplemented by tomatoes, potatoes, onions, and cabbage usually purchased from stores. Meat consumption has become more common with the opening of small butcheries selling beef. Traditional foods include dried phane caterpillars from mopane woodland, eaten as relish or snacks, fruits such as the wild morula plum, and beer made from sorghum or millet.

Traditional music, based on stringed instruments, and dance generally declined during the colonial period. After independence there was a revival of interest, particularly in music on the radio. The best-known modern art form incorporating traditional craftwork is basketry—most of it from northwestern Botswana—which is widely exported overseas. The author Bessie Head (1937–86) wrote novels in English that reflect the contemporary realities and history of Serowe. The publishing of fiction in Tswana was revived in the 1980s.

There is a national museum and art gallery in Gaborone and an increasing number of district museums founded by local community initiative. A national learned and scientific society, the Botswana Society, holds regular lectures and publishes an annual journal and books.

German inflation stuck below zero for fourth month in a row

China and Botswana signed a Memorandum of Understanding (MoU) for cooperation on the Belt and Road Initiative (BRI) on Jan. 7, 2021, making Botswana the 46th partner country in Africa in BRI cooperation