Abstract : The Baltic Exchange has published its weekly report of the dry and tanker markets for June 15-19, 2020.

BEIJING, June 22 (Xinhua) -- The Baltic Exchange has published its weekly report of the dry and tanker markets for June 15-19, 2020 as below:

The Capesize market trajectory this week has been one of the steepest rallies the sector has experienced. Opening at $12,410, the sector had almost doubled to $25,511 by the end of the week as the Atlantic basin surged into life. A barrage of negative fundamentals in recent times has weighed heavily on Cape demand and pushed imbalances into the fleet positioning. Strengthening iron ore demand in the Far East has been answered by fronthaul loading location sparking a revival of sorts. The Atlantic Basin, bereft of business weeks back, has now reached unexpected heights settling at $23,850 - a lift of $15,200 on the week. The Pacific Basin was largely swept up in the sentiment this week, as it was forced to compete for vessels being lured away to greener pastures. Voyage route C5 West Australia to China reached a high Thursday at $8.918 to drop slightly to $8.841 to close the week. Ending Friday the Capesize 5TC posted its smallest daily gain for the week of 231 and appeared to have reached an altitude too high to survive.

A dramatic week in the Panamax world with the Atlantic market sparking into life.  Route P1A marked at $4,670 on Monday and virtually doubled in value over the week, whilst P2a gained well over $3,000 on the week too. Tight tonnage count in the north Atlantic for June and improved demand from the US Gulf - as well as steady flow from EC South America -were the main contributors to said push. In Asia, a less frenetic pace, but a week in which saw the market gain in values. Solid coal demand from Indonesia being the main demand driver, as well as sourcing of tonnage in the Asian basin for US Gulf and EC South America trade all impacted rates. On the Indonesian coal run to China, several Kamsarmax types regularly hit the $9,000 level for such trade. Confidence in the market for the rest of the year gave testament to an improved number of period fixtures this week, the highlight being an 81,000dwt achieving $12,500 for short period.

BSI, like the larger sizes, gained during the week closing 45 points up from Monday. Increased demand was seen from a few key areas. A 61,000dwtopen US Gulf, fixing nine to 11 months, at $11,150 with redelivery Atlantic. From Asia a 58,000dwtopen north China, fixed three to five months, in the low $9,000s. From the Atlantic increased enquiry from east coast south America helped rates with Ultramax sizes being covered in the upper $12,000s, plus upper $200,000s ballast bonus for fronthaul business. From the Continent there was also stronger demand. A 57,000dwtfixing a trip to the east Mediterranean with scrap in the upper $7,000s. Like the previous week, the Indian Ocean remained firm and drew vessels from south east Asia. A 56,000 fixing delivery Gresik trip via South Africa redelivery in the far east at $10,000. Nickel ore demand remained a 61,000dwtfixing delivery Tianjin via Philippines redelivery south China at $8,500 option north China at $9,000.

Rates remained strong in both basins and further improved throughout the week. The Continent and Mediterranean market saw better numbers compared with last week, whilst east coast South America and the US Gulf continued firming up. Particularly in the East, the Pacific routes recorded the highest values since 2020 began with the rates gaining over $3,000 respectively on each route over the last 40 days. Mid-sized Handysize were fixed from east coast South America in the range of $7,000 to $8,000 for a transatlantic run. Handy vessels were reported fixed from Canakkale for a trip via east Mediterranean / Black Sea to redeliver in the US Gulf in the mid/low $5,000s. A 35,000dwtdelivery in the Philippines was fixed for a trip to China in the mid/high $8,000s and a 34,000dwtopen Indonesia was fixed for a steel trip via Indonesia to China Hong Kong in the low $8,000s.

In the Middle East Gulf there was little excitement for owners. Rates for 75,000mt to Japan stumbled back to the WS85 region having briefly nudged low WS90s. Improved activity in the 55,000mt trade to Japan saw rates creep up to low/mid WS 70s representing a modest 5/7.5 point gain here. Elsewhere, though, rates were only heading in one direction. For owners plying the 37,000mt UKC to USAC trade, they were faced with stiff competition from plenty of early tonnage. Rates continued their downward trajectory losing another 10 points to sit now at WS85 level. There was no respite for owners looking for backhaul businessfrom the US Gulf where rates for 38,000mt to UKC slipped from high WS70s a week ago to barely WS67.25 and remain under downward pressure here. The 30,000mt clean cross-Med trade continued to soften with East Med load fixed at WS 100. West Med load is now assessed in only the high WS90s with WS95 agreed for Italy load.

It has been a busier week than the previous two weeks in the Middle East as the July cargo stems came to the fore and charterers were able to bring rates down slightly, with 270,000mt to China now fixing around the WS57 mark - down three points from last week. For the long-haul trip of 280,000 mt to USG via the cape/cape-routing rates are presumed to be unchanged in the low WS30s, with no activity being seen on the route this week. In the Atlantic sector, no fixture activity was seen on the 260,000mt West Africa to China trip, so sentiment has pushed the rates down two to three points to the W56-57 region. Meanwhile, 270,000mt USG to China saw a couple of fixtures early in the week concluded at $7.5m. The slight fall elsewhere has weakened the market and is now rated at $7.25m.

It would appear that the bottom has been found in this market, certainly in the west this week. The main focus of fixing activity has been on west-to-east voyages with numerous fixtures loading from the US Gulf, West Africa, Mediterranean and Black Sea. However, there have been a couple of fixtures for both 130,000mt West Africa/UKCont where rates have remained flat at WS47.5 and 135,000mt Black Sea/Med where rates again remain in the very low WS50s. In the Middle East, there has been good activity with VLCC cargoes being split on to the weaker over-supplied Suezmax vessels to go east. The effect has been that the rates now for 140,000mt Middle East Gulf to Med have fallen a couple of points to low WS20s.

Rates for 80,000mt Ceyhan/Med have slipped five points to WS60. In Northern Europe the market steadied with 80,000mt Cross North Sea still rated at WS70, yet 100,000mt Baltic/UKC slipped another three points to WS40. Across the Atlantic, rates for 70,000 Carib/USG remained at around WS70. In the 70,000mt USG/UKC market, rates gained about 7.5 points to WS67.5 with the tonnage list beginning to thin out. 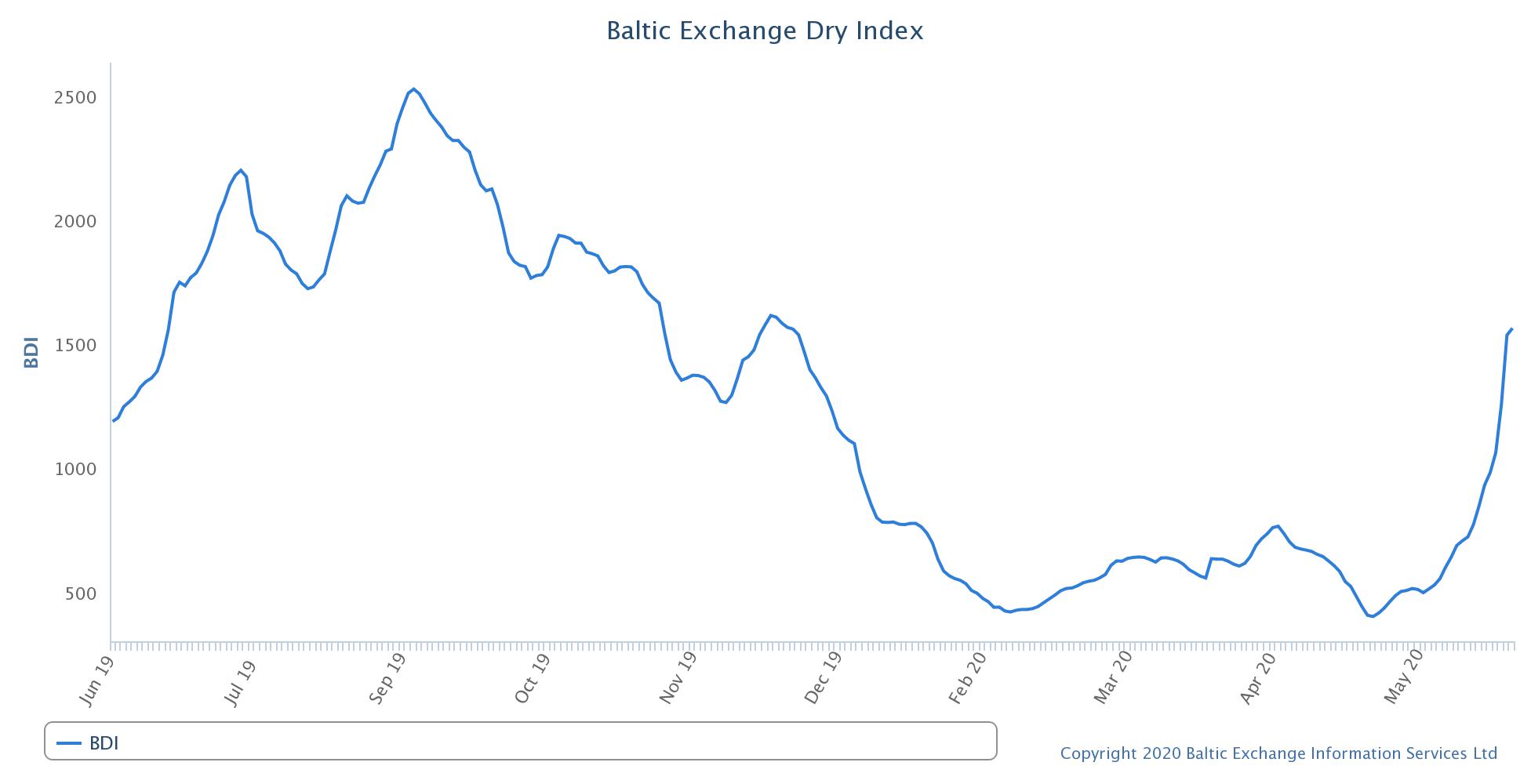 3.
Beijing to be built into int'l innovation hub: officials

The Baltic Exchange has published its weekly report of the dry and tanker markets for June 15-19, 2020.