Abstract : Forced cancellation of offline events, stagnation of market sales, disruption of supply chains, and delayed return of tens of thousands of workers, the challenges posed by the ongoing coronavirus epidemic on Chinese tech firms are unprecedented.

GUANGZHOU, Feb. 24 (Xinhua) -- Forced cancellation of offline events, stagnation of market sales, disruption of supply chains, and delayed return of tens of thousands of workers, the challenges posed by the ongoing coronavirus epidemic on Chinese tech firms are unprecedented.

Taking decisive and speedy measures with strong resolution to cope with the sudden changes in the production and market environment, Chinese tech firms have demonstrated their resilience in the face of the difficulties and uncertainties.

Wearing a face mask and jeans, China's tech giant Xiaomi's founder and CEO Lei Jun stood in front of a large screen and launched the smartphone maker's flagship product MI 10 via an online-only event on Feb. 13.

It was an unexpected move and also marked the company's first time to unveil its flagship smartphone online. The company had planned to hold an offline event attended by 3,000 people in Beijing, but was forced to cancel it due to the growing concern over the outbreak of the novel coronavirus.

With a rapid response, Xiaomi managed to move the event from offline to online. Within one minute of the online event, the sales of the new product hit 200 million yuan (28.4 million U.S. dollars).

"This is a special launch at a special time," said Lei. "Our lives can be affected by the epidemic, but never be defeated."

Like Xiaomi, many smartphone makers in China have switched to "crisis mode" soon after the coronavirus outbreak. OPPO, one of the world's top five smartphone makers by sales volume last year, also planned to launch its new products online.

Chen Mingyong, founder and CEO of OPPO, said although the outbreak resulted in the cancellation of the Mobile World Congress (MWC) which had been scheduled to be held on Feb. 24 in Barcelona of Spain, the company would unveil its 5G flagship smartphone Find X2 and its first smart watch product online in early March. 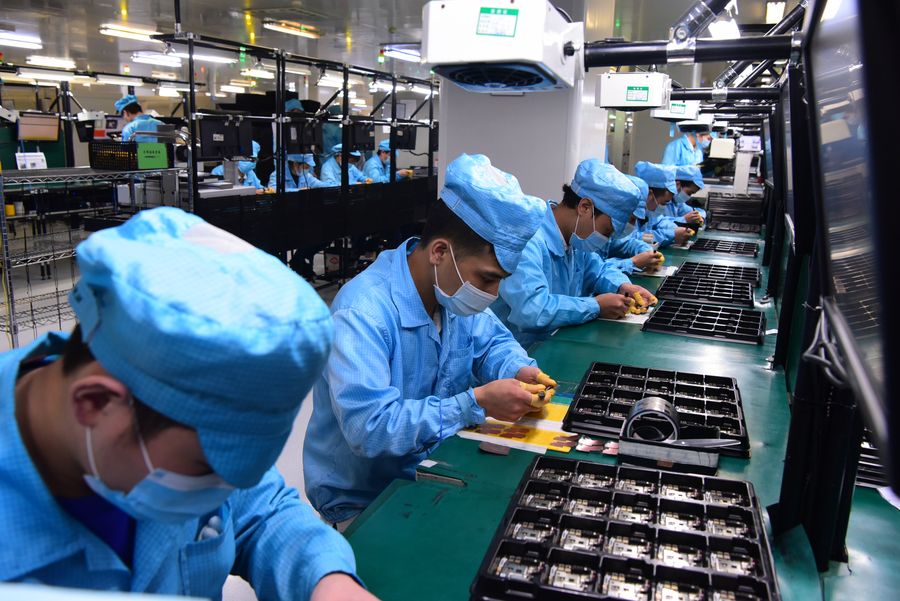 "Although our business has been affected by the outbreak in 2020, we will still gain more shares in markets that we have already entered, further explore the markets in Germany, Ireland, Portugal, Belgium and Romania, and enter the Latin American market with a foothold in Mexico. We are confident of maintaining the steady operation of our global business," said Chen.

Vivo, another major smartphone maker headquartered in the southern Chinese city of Dongguan, Guangdong Province, like OPPO, will unveil its 5G flagship phone iQOO online. After the outbreak, the firm initiated an emergency response and updated its employees on prevention measures in the fight against the virus. For customers who have ordered phones online, it disinfected the phones before delivering them by mail.

Telecom giant Huawei told Xinhua that it has provided 5G platforms and aided the construction of Huoshenshan and Leishenshan, two newly built major makeshift hospitals in Wuhan, epicenter of the coronavirus outbreak. As of Saturday, Huawei has resumed 90 percent of its production capacity. 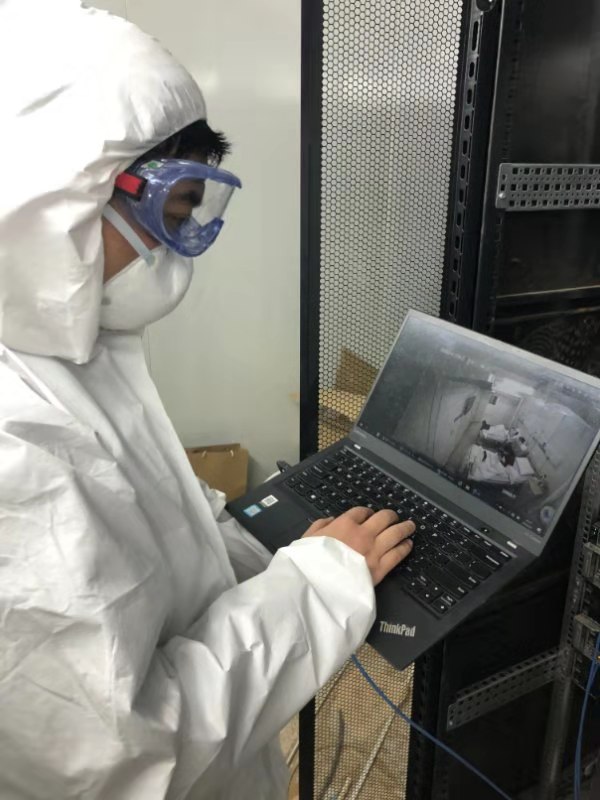 While the coronavirus outbreak poses challenges to supply chains, sales, and employees' safety, Chinese tech companies are striving to turn challenges into opportunities.

Gree Electric Appliances, a leading home appliance manufacturer in China, suffered a great hit from the epidemic. Its factory in Wuhan was closed, stores were frozen, and even online sales were stalled as delivery and installation services were disrupted. However, the company sees opportunities in the surging demand for thermometers, air purifiers and face masks, and accelerates the R&D and production of those products.

"The difficulties are here. Instead of sitting and watching revenue slide, we are doing whatever we can," said Dong Mingzhu, Gree's chairwoman.

Thanks to the accumulation of core technologies, the company was able to react quickly to consumers' demands. For example, it developed 60 moulds for thermometers within 10 days to meet the market demand. Based on its previously developed anti-virus air purifier, it is developing an air purifier that can kill coronavirus. The product is under testing in some hospitals in Wuhan, and will soon be put into large production.

Ping An Insurance Group, a leading financial firm that witnessed its emerging technology business grows 27.1 percent year on year to about 82.1 billion yuan in 2019, is another firm that sees opportunities over challenges.

Du Peng, deputy Party secretary of the group, said that the company has been trying to use technology to tackle social management challenges in recent years. He said that though the epidemic has posed challenges to city management, it has spurred the demand for online government and medical services. After the outbreak of the epidemic, the Smart City Business Department of Ping An developed an online AI system that can help doctors diagnose coronavirus infected patients faster.

"The outbreak further demonstrates the scarcity of medical resources in China, but we can alleviate the problem by using technology," said Du. "Although the shock is grave, it also presses the fast-track button of building smart cities in China, and boosts the wider applications of smart technologies." 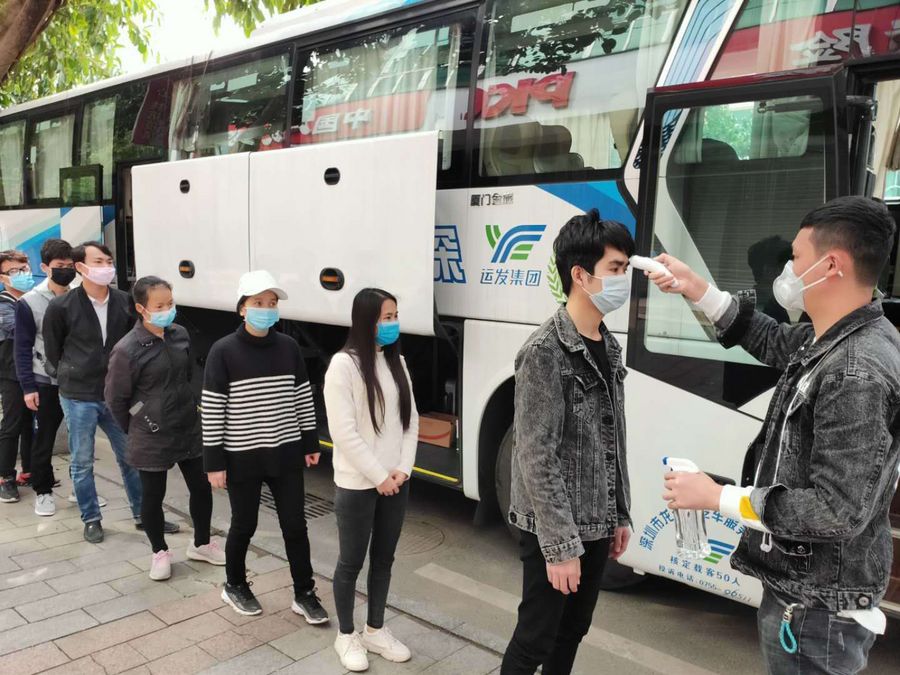 Employees of OPPO line up for temperature tests before getting on a chartered bus transfering them from Yulin of south China's Guangxi to their factory location in Guangdong, south China, Feb. 21, 2020.(Xinhua)

Business executives and academics of the high-tech field in China have reached a consensus that the epidemic cannot change the long-term development trend of China's economy.

Wu Xiaobo, professor of innovation and strategic management with Zhejiang University, called on people to have a rational understanding of the aftershock of the outbreak, which is an economy difficulty caused by a sudden non-economic event, different from the regular economic crisis.

"Thus, it has not, and will not disrupt the industrial chain and demand supply chain. From a mid- and long-term perspective, China's economy will be undoubtedly back on track, and the trend of consumption upgrade will not cease," Wu said.

Li Yunfei, deputy general manager of the new energy automobile manufacturer BYD, said that in the long run, China's economy is strong and resilient, the short-term impact of the epidemic will wane, and China's share of the world economy will rise steadily.

"If we look back to 2003, the automobile consumption reached a small peak after the SARS epidemic had ended. We are confident in the sales bounce after this epidemic, and are carrying out our plans orderly," Li said.

The company is set to launch a series of innovative products, including a new kind of automobile battery that can achieve a great leap in safety, performance and lifespan, and a new mode of car called Han based on this battery.

Zeng Qinghong, chairman of Guangzhou Automobile Group, another major automobile manufacturer headquartered in the Pearl River Delta, said the company suffered a sales decline of 15 percent year-on-year in January, but that could be largely explained by the one-week reduction of workdays last month as this year's Spring Festival holiday falls in the month. He said the domestic demand for automobiles is still robust.

"The impact of the epidemic is real, but we could offset the impact by working around the clock," said Zeng. "The difficulties are temporary, we have strong confidence that we can achieve high-quality development."

The Ministry of Public Health researches Andrographis paniculata for COVID-19

Forced cancellation of offline events, stagnation of market sales, disruption of supply chains, and delayed return of tens of thousands of workers, the challenges posed by the ongoing coronavirus epidemic on Chinese tech firms are unprecedented.