Abstract : China and Luxembourg signed memorandums of understanding on jointly building the Belt and Road cooperation on March 27, 2019.

China and Luxembourg signed memorandums of understanding on jointly building the Belt and Road cooperation on March 27, 2019. 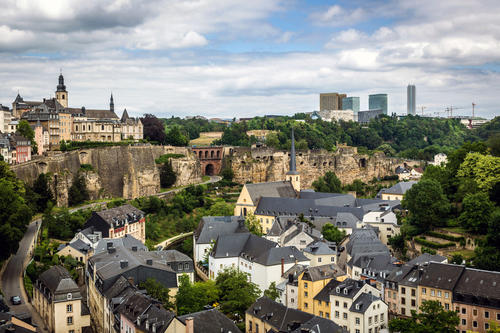 Luxembourg is a country in northwestern Europe. As one of the world's smallest countries, it is bordered by Belgium on the west and north, France on the south, and Germany on the northeast and east. It is a point of contact between the Germanic- and Romance-language communities of Europe, and three languages are regularly employed in the grand duchy itself: Luxembourgish, German, and French. The peoples of Luxembourg and their languages reflect the grand duchy's common interests and close historical relations with its neighbours.

In the 20th century, Luxembourg became a founding member of several international economic organizations. Perhaps most importantly, the grand duchy was an original member of the Benelux Economic Union (1944), which linked its economic life with that of the Netherlands and of Belgium and would subsequently form the core of the European Economic Community (EEC; ultimately succeeded by the European Union).

The northern third of Luxembourg, known as the Oesling (Ösling), comprises a corner of the Ardennes Mountains, which lie mainly in southern Belgium. It is a plateau that averages 1,500 feet (450 metres) in elevation and is composed of schists and sandstones. This forested highland region is incised by the deep valleys of a river network organized around the Sûre (or Sauer) River, which runs eastward through north-central Luxembourg before joining the Moselle (or Mosel) River on the border with Germany. The Oesling’s forested hills and valleys support the ruins of numerous castles, which are a major attraction for the region’s many tourists. The fertility of the relatively thin mountain soils of the region was greatly improved with the introduction in the 1890s of a basic-slag fertilizer, which is obtained as a by-product of the grand duchy’s steel industry.

The southern two-thirds of Luxembourg is known as the Bon Pays, or Gutland (French and German: "Good Land"). This region has a more-varied topography and an average elevation of 800 feet (about 245 metres). The Bon Pays is much more densely populated than the Oesling and contains the capital city, Luxembourg, as well as smaller industrial cities such as Esch-sur-Alzette. In the centre of the Bon Pays, the valley of the northward-flowing Alzette River forms an axis around which the country’s economic life is organized. Luxembourg city lies along the Alzette, which joins the Sûre farther north.

In the east-central part of the Bon Pays lies a great beech forest, the Müllerthal, as well as a sandstone area featuring an attractive ruiniform topography. The country’s eastern border with Germany is formed (successively from north to south) by the Our, Sûre, and Moselle rivers. The slopes of the Moselle River valley, carved  in chalk and calcareous clay, are covered with vineyards and receive a substantial amount of sunshine, which has earned the area the name “Little Riviera.” Besides vineyards, the fertile soils of the Moselle and lower Sûre valleys also support rich pasturelands. Luxembourg’s former iron mines are located in the extreme southwest, along the duchy’s border with France.

Luxembourg has been one of the historic crossroads of Europe, and myriad peoples have left their bloodlines as well as their cultural imprints on the grand duchy. The Celts, the Belgic peoples known as the Treveri, the Ligurians and Romans from Italy, and especially the Franks were most influential. The language spoken by Luxembourg's native inhabitants is Luxembourgish, or Lëtzebuergesch, a Moselle-Franconian dialect of German that has been enriched by many French words and phrases. Luxembourgish is the national language; German and French are both languages of administration. There is a strong sense of national identity among Luxembourgers despite the prevalence of foreign influences. The great majority of Luxembourg’s native citizens are Roman Catholic, with a small number of Protestants (mainly Lutherans), Jews, and Muslims.

Luxembourg's economy is notable for its close connections with the rest of Europe, since Luxembourg itself is too small to create a self-sustaining internal market. Luxembourg's prosperity was originally based on the iron and steel industry, which in the 1960s represented as much as 80 percent of the total value of exports. By the late 20th century, however, the country’s economic vigour stemmed chiefly from its involvement in international banking and financial services and in such noncommercial activities as hosting intra-European political activities. In the 21st century, information technology and electronic commerce also became important components of Luxembourg’s economy. The result of the country's adaptability and cosmopolitanism is a very high standard of living; the Luxembourgers rank among the world’s leaders in standard of living and per capita income.

The major cultural institution of Luxembourg is the Grand Ducal Institute, which has sections devoted to history, science, medicine, languages and folklore, arts and literature, and moral and political sciences. It functions as an active promoter of the arts, humanities, and general culture rather than as a conservator. The Luxembourg National Museum (formally the National Museum of History and Art) surveys  fine arts and industrial arts as well as  the history of Luxembourg. Other prominent museums include the Villa Vauban–Museum of the Art of the City of Luxembourg, MUDAM Luxembourg (Grand Duke Jean Museum of Modern Art), the Museum of the History of the City of Luxembourg, and the National Museum of Natural History. There is considerable public use of the National Library, the National Archives, and the Music Conservatory of the City of Luxembourg. The grand duchy also maintains cultural agreements with several European and other nations that provide it with the finest in the musical and theatrical arts. The Philharmonic Orchestra of Luxembourg (which was known as the Grand Orchestra of Radiotelevision Luxembourg before it came under government administration in 1996) is considered outstanding. There is an extensive market in Luxembourg city for works of painting and sculpture, both traditional and modern. The grand duchy’s architectural heritage extends through practically the entire span of Europe's recorded history, from ancient Gallo-Roman villas to medieval castles, Gothic and Baroque churches, and contemporary buildings.

China rolls out 20 measures to help SMEs tide over epidemic

China and Luxembourg signed memorandums of understanding on jointly building the Belt and Road cooperation on March 27, 2019.