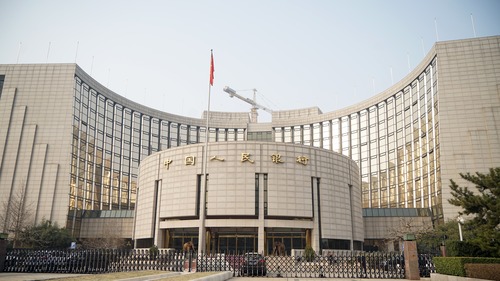 Photo taken on March 13, 2018 shows the headquarters of the People's Bank of China in Beijing, capital of China. (Xinhua/Cai Yang)

The RRR cut did not take market players by surprise as it came shortly after Chinese Premier Li Keqiang said China would formulate policies based on the needs of market players, cut the RRR at suitable timing and increase support for the real economy when meeting via video link with Kristalina Georgieva, Managing Director of International Monetary Fund (IMF) in Beijing on December 3.

As the RRR cut will apply to banking institutions only excluding those that already enjoy the five percent of RRR, around 1.2 trillion yuan of long-term capitals are expected to be unlocked to nurse the real economy.

The RRR cut is a regular monetary policy operation. Financial institutions will use part of the released funds to repay the maturing medium-term lending facilities (MLFs) loans while using the rest to replenish long-term funds to better meet the needs of market entities.

The Chinese central bank will maintain regular monetary policies to ensure their continuity, stability and sustainability and refrain from a flood of stimuli, in order to create a favorable monetary and financial environment for high-level development and supply-side structural reforms, said the PBOC official.

Wen Bin, chief researcher with China Minsheng Banking Co., Ltd. deemed that China's economy is expected to face certain downward pressure in the first half of 2022 and enterprises, especially small and medium-sized ones, may encounter difficulties in production and operation. Under such circumstances, there is room and need to cut the RRR at appropriate timing for the cross-cyclical macroeconomic regulation.

But the RRR cut announced on December 3 shall not be interpreted as a sign of easing monetary policy, noted Wen, saying that the PBOC will also better leverage its structural monetary policy tools to guide financial institutions to further increase their support for prioritized fields and vulnerable areas such as small and micro enterprises, green finance, scientific and technological innovation and rural vitalization.

Recent years, PBOC has repeatedly mentioned such words including "normal monetary policy space" and "regular operation", and is anticipated to "keep bullets" to prepare for future uncertainties, such as a downward economy, said Zhang Jiqiang, vice director with research institute of Huatai Securities.

According to Zhang, if another RRR cut to fill the liquidity gap appears in 2022, there is also no need for over-interpretation. In particular when the open market operations (OMO) and MLF rates do not change, it will be hard to reverse the reality that funding costs will fluctuate along with policy rates.

As for whether the RRR cut will lead to a benchmark interest rate cut, Chen Xing, analyst with Zhongtai Securities said that considering the recent changes in external policies and still notable PPI rises in domestic market, the downward economic pressure has not yet been fully released. It may be appropriate to cut the interest rates in 2022, particularly in the second quarter.

The RRR cut will reduce the funding cost of financial institutions by about 15 billion yuan per year, which will in turn help lower the comprehensive social financing cost for real economy participants.

Currently, the weighted average interest rates on loans shall be guided down further while replacing MLF operation by the RRR cut to help commercial banks lower the funding cost will in turn transmit to the asset end and reduce the comprehensive financing cost for the real economic sector, said Li Chao, chief economist with Zheshang Securities.

On one hand, in spite of the possibility that economic indicators in the fourth quarter of 2021 may be better than those in the third quarter, they may stay still at relatively low levels, said Chen Xing.

On the other, the robust year-on-year profit growth of industrial enterprises could not change the even improved profit share by upstream sectors and nearly 40 percent of the industries suffered from no profit growth when revenues continued to grow. When most small and micro businesses are mostly involved in these mid- and downstream industries, the RRR cut will effectively free up low-cost funds to support the development of companies in the real economy, Chen added. (Edited by Duan Jing with Xinhua Silk Road, duanjing@xinhua.org)