Abstract : China's financial sector, after having facilitated the stable economic recovery in the first half of 2021, is urged to well adhere to the safety bottom line and showcase more resilience and vitality to propel the high-quality development of the economy in the second half of the year. 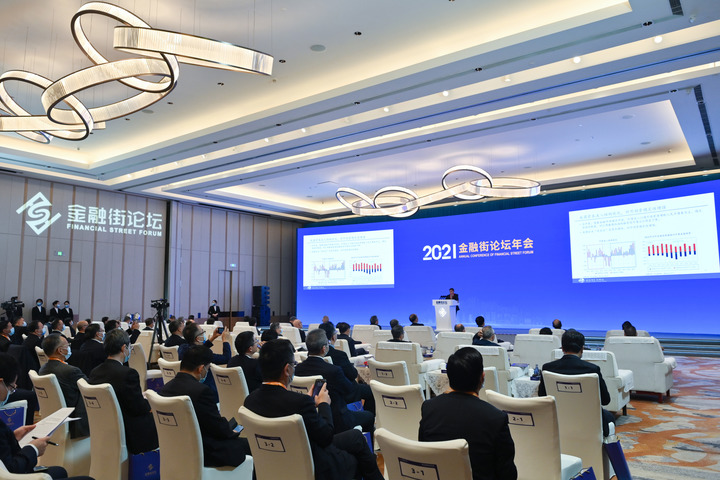 BEIJING, Oct. 26 (Xinhua) -- China's financial sector, after having facilitated the stable economic recovery in the first half of 2021, is urged to well adhere to the safety bottom line and showcase more resilience and vitality to propel the high-quality development of the economy in the second half of the year.

Recently, China's financial sector has been facing both external shocks arisen from the possible policy change of central banks of developed economies such as the U.S. Federal Reserve and internal worries caused by debt crisis of some companies.

As for their influences, Pan Gongsheng, deputy governor of Chinese central bank and head of the State Administration of Foreign Exchange (SAFE) said that influences from the policy change of the U.S. Fed upon China's foreign exchange market is predicted to be controllable together with the likely two-way cross-border capital flows and the exchange rate of Renminbi (RMB) will remain stable on basis of reasonable and balanced levels.

In light of the complicated and changing world economic and financial situations, steady economic recovery and optimistic prospects for China's economic fundamental over the long run provided confidence for the financial system to offset external shocks.

Pan noted that compared with the last round of tightening cycle of the U.S. Fed, China's economy stays currently in a better position in the present economic cycle, meaning that the national economy maintained its recovery momentum with main macroeconomic indicators staying in a reasonable band and employment seen stable, all of which cemented the basis for China's forex market to guard against external shocks.

Regarding the internal risks, the debt troubles of real estate developer Evergrande Group have caused lots of attention on the domestic real estate market.

Yi Gang, governor of Chinese central bank, said the debt crisis of Evergrande Group represented individual case of debt crisis risks and one third of its around 300 billion U.S. dollars of debts is financial liabilities with both decentralized creditors and collaterals, indicating controllable spillover risks for the financial industry.

Generally, overall risks of China's real estate market are controllable in spite of the individual problems and reasonable funding demand of the sector is being met. Under such circumstances, the healthy development of China's property market will not change, held experts during the Annual Conference of Financial Street Forum.

Well handling the default risks of several large firms and pressing ahead with the structural reforms of small- and medium-sized financial institutions are the two aspects of significant importance for China's financial sector to resolve risks when adhering to market-oriented and the rule of the law principles and the bottom line thinking for risk prevention and steady development.

Since the beginning of the third quarter, increasing domestic and foreign risks and challenges caused more pressures on China's economic structural transformation and against such backdrop, better distribution of financial resources became particularly important.

As manufacturing is always the fundamental of the economy and the basis to grow a strong economy, the key for China to establish the new development pattern, deepen supply-side structural reform, and achieve high-level of scientific and technological independence and self-reliance lies in developing the manufacturing industry, said Liao Lin, head of the Industrial and Commercial Bank of China.

Focusing on key industries and channeling more financial resources into manufacturing are in need. Statistics showed that by the end of September, mid- and long-term loans balances for manufacturing industry rose 37.8 percent year on year, up 2.6 percentage points than the comparable growth in last year.

As for small and micro businesses, they are also a vital sector which needs financial support given their significant role in creating employment and maintaining the resilience of the real economy.

By the end of September, balances of loans for small and micro businesses in China grew 27.4 percent year on year, 15.5 percentage points higher than the growth of other types of loans.

In the future, China's expected high-quality development will provide unprecedented opportunities for its financial industry.

Recent years, the peaking of carbon dioxide emissions by 2030 and carbon neutrality by 2060 have become popular words for China's financial sector. A series of green transformation-related financial products such as green lending and green bonds have been rolled out.

Supporting green and low carbon development is the focus of China's financial sector in the following period and systemically important financial institutions are expected to play a huge role, said Yi Gang.

When talking about topics cared much by people such as insurance, Guo Shuqing, head of CBIRC said that despite being the second largest by premium incomes worldwide, China's insurance sector still needs improvement in its density and depth and the pertinence and diversity of insurance coverage are also insufficient.

Insurance sector, as an industry for managing risks, shall enhance the professional level in pre-warning of risks, management during the risk event and response after the event, noted Guo. (Edited by Duan Jing with Xinhua Silk Road, duanjing@xinhua.org)

China's financial sector, after having facilitated the stable economic recovery in the first half of 2021, is urged to well adhere to the safety bottom line and showcase more resilience and vitality to propel the high-quality development of the economy in the second half of the year.