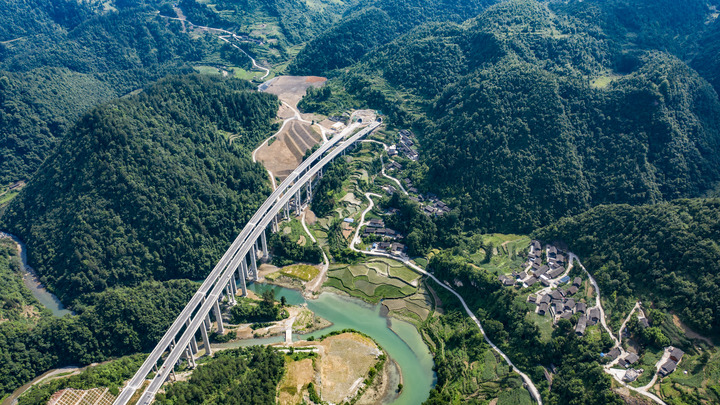 After undergoing overheated subscriptions, the nine infrastructure REITs did not rise or decline to their 30 percent of daily change limit on the first trading day, with the highest price increase at 14.72 percent and turnover ratios generally at 10-30 percent.

In view of their stable performance on Monday, analysts believed that their price changes in the following period are likely to further reflect their inherent value, which is highly predictable and transparent and unlikely to cause differences in their valuation among investors.

Chart I: Performances of China's first batch of publicly-offered infrastructure REITs on their first trading day on Mon.

Industry insiders are currently generally optimistic about the short-term trend of the publicly-offered infrastructure REITs. As they believed, a certain degree of trading activity is expectable for the REITs thanks to no foreseeable profit-taking pressures in short term and diversified risk appetites of investors including retail buyers and financial institutions of differed types.

The market making system previously introduced for the nine infrastructure REITs will also improve their liquidity on the secondary market. Prior to Monday, the nine REITs' managers have all released announcements on introducing market makers such as CITIC Securities, China International Capital Corporation, Guotai Junan Securities, and GF Securities.

Regarding their price trend, Yu held that their risk premiums are expected to gradually shrink and diverge over the long run. Taking REITs with franchise-related assets as base assets as an example, they are more similar to characteristics of bonds and their turnover ratio and market performances in the following period may be relatively stable, according to Yu.

As a new way of financing, publicly-offered REITs expand the financing channels of infrastructure enterprises and provide extra liquidity and opportunities for infrastructure companies to reduce leverage ratio.

In the following two-three years, China's infrastructure REITs market is likely to remain small in size, but in next decade, it is expected to grow to be a relatively large market, according to Moody's.

Under such circumstances, the infrastructure REITs market in China may expand and reach two trillion yuan if only 5-10 percent of the above-mentioned 52 trillion yuan of infrastructure assets can be taken as base assets in next decade, said Moody's, highlighting that the actual market size will be up to the size of government inputs and private investor preference.

Being steady in generation and predictability of returns, infrastructure REITs will attract private capital to enter, said the report, adding that despite the fact that compared with other assets such as 10-year T-bonds whose yields stay at relatively low 3.0 percent at present, infrastructure REITs are still competitive in terms of rate of returns. (Edited by Duan Jing with Xinhua Silk Road, duanjing@xinhua.org)