Belt and Road Countries -- Democratic Republic of the Congo

Abstract : China and the Democratic Republic of the Congo (DRC) signed a Memorandum of Understanding (MoU) for cooperation on the Belt and Road Initiative (BRI) on January 6, 2021.

China and the Democratic Republic of the Congo (DRC) signed a Memorandum of Understanding (MoU) for cooperation on the Belt and Road Initiative (BRI) on January 6, 2021. 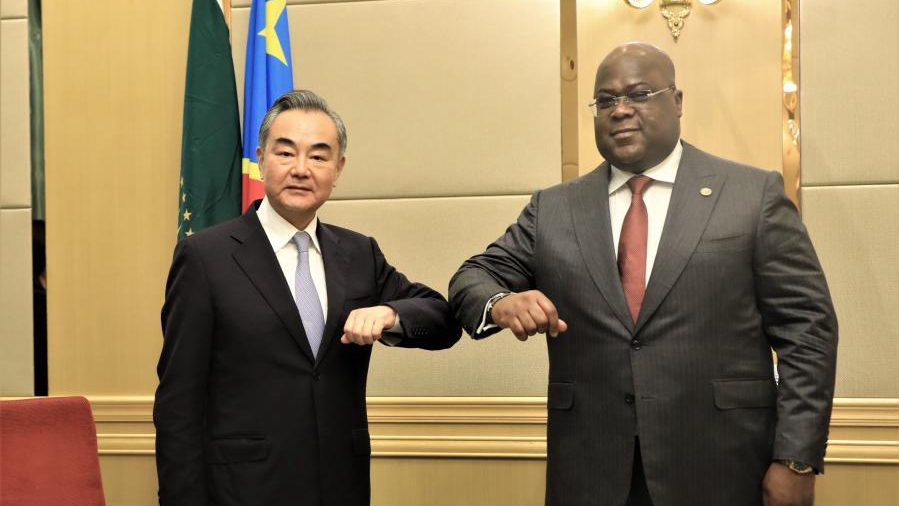 The Democratic Republic of the Congo is extremely rich in natural resources but has suffered from political instability, a lack of infrastructure, corruption, and centuries of both commercial and colonial extraction and exploitation with little widespread development. Besides the capital Kinshasa, the two next largest cities, Lubumbashi and Mbuji-Mayi are both mining communities.

The Democratic Republic of Congo is widely considered one of the world's richest countries in natural resources; its untapped deposits of raw minerals are estimated to be worth in excess of US$24 trillion. The Congo has 70% of the world's coltan, a third of its cobalt, more than 30% of its diamond reserves, and a tenth of its copper.

Despite such vast mineral wealth, the economy of the Democratic Republic of the Congo has declined drastically since the mid-1980s. The African country generated up to 70% of its export revenue from minerals in the 1970s and 1980s and was particularly hit when resource prices deteriorated at that time. By 2005, 90% of the DRC's revenues derived from its minerals).

Congolese citizens are among the poorest people on Earth. DR Congo consistently has the lowest, or nearly the lowest, nominal GDP per capita in the world.

Domestic agriculture is the main source of food and income for the majority of the population. Agriculture, animal husbandry, fishing, and forestry combined provide employment for more than three-fourths of the labour force and, on average, account for more than two-fifths of GDP.

Although the country is rich in agricultural potential, deterioration of the transportation network and agricultural services since independence have led to a return to subsistence agriculture and a collapse of market production. Foodstuffs such as cereals and fish are imported in increasing amounts. Coffee is the chief agricultural export, although much of it is smuggled out of the country; production of palm oil, rubber, and cotton, once mainstays of the export economy, has become almost negligible.

In the humid equatorial region, cassava (manioc) and rice are the basic food crops. Peanuts (groundnuts), oil palms, and fruit trees are also important, while robusta coffee is the main cash crop. In the eastern highlands, yams, beans, and sweet potatoes are used as food crops, while arabica coffee and tea are export commodities. Corn (maize), an important subsistence crop, is grown widely but chiefly centred on the southeast. Vegetable growing is widespread throughout Congo.

Livestock and poultry are kept in every province. Cattle are raised mainly in the east and the south. Pigs are kept in the west and sheep in the eastern highlands. Other domestic animals include chickens, geese, pigeons, and rabbits. Commercial meat production is limited, however, and the country depends upon imports to fulfill its requirements.

A small part of the yearly production of timber is exported for veneering or plywood; most, however, is used locally for fuel. There is some commercial freshwater and ocean fishing. Local hunting, fishing for private consumption, and poaching of wild game are not ordinarily reported in official statistics and are difficult to measure.

The country’s main economic resource is its mineral deposits; mining produces almost nine-tenths of total exports. The abundance of minerals in Katanga province was among those factors that attracted European powers to Congo in the 19th century.

Minerals found in Katanga include copper, cobalt, zinc, cassiterite (the chief source of metallic tin), manganese, coal, silver, cadmium, germanium (a brittle element used as a semiconductor), gold, palladium (a metallic element used as a catalyst and in alloys), uranium, and platinum. The region west of Lake Kivu contains cassiterite, columbotantalite, wolframite (a source of tungsten), beryl, gold, and monazite (a phosphate of the cerium metals and thorium). Lake Kivu also harbours vast reserves of methane, carbonic, and nitrogen natural gases. There are deposits of iron ore and gem-quality diamonds in south-central Congo, while the central regions are rich in industrial diamonds. In the northeast there are gold, coal, and iron-ore deposits; there are prospective deposits of gold, monazite, and diamonds in the northwestern regions as well. Coastal Congo contains bauxite, gold, and offshore deposits of petroleum. The limestone deposits that occur throughout the country are considered to be among the richest in Africa.

Congo’s forest reserves cover more than half of the country and are among the largest in Africa. Wild game supplements the local diet and is an important item in local commerce. Rivers, lakes, swamps, and ocean contain vast reserves of fish.

It is estimated that the country’s hydroelectric resources make up about one-eighth of global capacity and perhaps half of Africa’s potential capacity. This tremendous potential comes from the many rapids along the rivers of the Congo system. Thermal energy can be derived from the forests and coal and petroleum deposits.

Manufacturing accounts for a small proportion of the Congolese GDP. The sector has been hampered by a variety of factors, including difficulty obtaining machinery and spare parts and an unreliable electricity supply. Manufacturing industries can be classified into two main categories. Consumption industries produce processed foods, beverages, cigarettes, cloth, printed material, hosiery, shoes and leather, metallic fabrics, and such chemical products as soap, paints, rubber, and plastics. Supply and equipment industries include spinning and weaving plants, chemical factories, and facilities to produce machinery, transport materials, nonmetallic minerals, and wood products. A petroleum refinery, opened in 1968, operates near Moanda.

The national central bank, the Bank of Congo, is located in Kinshasa, as are numerous commercial, savings, and development banks. There are also mortgage and credit banking institutions. Totally foreign-owned banks include U.S., British, and French institutions as well as the International Bank for Africa in Congo. The penetration of the banking system in Congo is extremely low, however, and only a fraction of Congolese citizens maintain bank accounts; the majority of transactions within the dominant informal sector are settled in cash. In 1998 the Congolese franc replaced the new zaire as the country’s official currency, but the new tender was seriously devalued by the country’s years of civil conflict. New notes were introduced in 2003.

For much of the first decade of the 21st century, Congo faced an increasingly negative balance of trade. Mineral products constitute most of the country’s total exports: diamonds, which account for almost one-half of trade revenue, are the country’s most valuable export; crude petroleum, cobalt, and copper are also significant. Coffee is the country’s most important agricultural export product. Exported manufactures are of limited value and volume. Imports consist primarily of foodstuffs, consumer goods, machinery (largely mining and transport equipment), and fuel. Although Belgium traditionally has been a primary trade partner, Congo has developed significant trade relationships with other countries of the European Union, South Africa, and China.

Congo is bounded to the north by the Central African Republic and South Sudan; to the east by Uganda, Rwanda, Burundi, and Tanzania; to the southeast by Zambia; and to the southwest by Angola. To the west are the country’s short Atlantic coastline, the Angolan exclave of Cabinda, and Congo (Brazzaville).

French is the official language of the Democratic Republic of the Congo. It is culturally accepted as the lingua franca facilitating communication among the many different ethnic groups of the Congo. Although several hundred local languages and dialects are spoken, the linguistic variety is bridged both by widespread use of French and the national intermediary languages Kikongo, Tshiluba, Swahili, and Lingala.

The culture of the Democratic Republic of the Congo reflects the diversity of its hundreds of ethnic groups and their differing ways of life throughout the country  — from the mouth of the River Congo on the coast, upriver through the rainforest and savanna in its centre, to the more densely populated mountains in the far east.

Since the late 19th century, traditional ways of life have undergone changes brought about by colonialism, the struggle for independence, the stagnation of the Mobutu era, and most recently, the First and Second Congo Wars. Despite these pressures, the customs and cultures of the Congo have retained much of their individuality.

Belt and Road Countries -- Democratic Republic of the Congo

China and the Democratic Republic of the Congo (DRC) signed a Memorandum of Understanding (MoU) for cooperation on the Belt and Road Initiative (BRI) on January 6, 2021.