Abstract : The Baltic Exchange has published its weekly report of the dry and tanker markets for June 29-July 3, 2020.

BEIJING, July 7 (Xinhua) -- The Baltic Exchange has published its weekly report of the dry and tanker markets for June 29-July 3, 2020 as below:

The Capesize market continues to go from strength to strength, as rates reach highs not seen since September last year. The rally is predominately off the back of the Atlantic Basin crying out for more tonnage. Atlantic charterers from Eastern Canada and Norway are seen to be paying large voyage rates to deliver their iron ore product to China. Iron ore prices have come off recent highs, yet the levels still remain a bonus for miners looking to take advantage - freight costs are an after-thought. The Atlantic Basin Transatlantic C8 broke through the $30,000 level with ease, settling the week at $36,225. The Pacific Basin C10 had more of a struggle in gaining ground with a lull midweek, before closing Friday at $33,529. Voyage routes all posted gains - although price discovery was difficult across the board with rumour and speculation playing a big roll. The West Australia to China C5 gained exactly $1 to settle at $10.723 while the Brazil to China C3 dipped for most of the week before lifting Friday up $0.83 cents to settle at $20.75.

The Panamax market initially appeared sluggish with rates in Asia slowly falling throughout the week. In contrast, the Atlantic - and in particular the north - held firm for the most part. By midweek it saw some significant pick-up in activity from South America, which sustained as the week ended. With talk of a healthy grain crop to come from the Black Sea for the second half of July and August, this appeared to support the market in many areas. And, with a large push from FFA's and Capesize rises on Thursday, sentiment quickly turned positive. Trans-Atlantic rates for index duration picked up from mid $12,000s to $13,000 by the end of the week. Meanwhile, the quicker Baltic round trips to Med/Continent featured at around the $15,000 mark. In Asia, despite a lack of fixing volume, mean rates for NoPac rounds for 82,000dwt pegged at approximately $9,500 levels.

The overall market was split between the basins with the Atlantic gaining momentum, whilst Asia and the Indian Ocean dampened. Little in the way of period activity surfaced - but a 56,000dwt open Fujairah fixed four to six months, trading in the mid $12,000s. As the week ended, stronger rates were seen in the Mediterranean and Black Sea areas. A 63,000dwt fixing in the upper $16,000s basis delivery Canakkale for a trip far east. Brokers also commented that from the US Gulf, Ultramax size vessels were seeing around $15,000 for trans Atlantic runs. Demand in the Indian Ocean weakened a little. However, a 55,000dwt fixed delivery Singapore trip - via east coast India - redelivery China at $9,000. Rates for Indonesian coal runs were also lower than of late. A 58,000dwt fixing delivery Vietnam trip via Indonesia redelivery west India in the low $4,000s. Further north a 57,000dwt fixed delivery CJK trip redelivery west coast India at $3,000.

The BHSI climbed above 400 points this week, which was last seen during end March this year. East coast South America was the brightest spark. The HS3 route for transatlantic run achieved a $10,000 benchmark basis for a Baltic 38,000dwt vessel. However, signs of softening showed in the east, whilst some Pacific route indices started declining. On the period front, a 37,000dwt open Hamriya next week was fixed at $11,750 with redelivery in Persian Gulf/China range - but the duration was not clear. A 34,000dwt open Canakkale in mid July was fixed for a trip via the Black Sea to Southeast Asia at $11,500. Meanwhile, a 28,000dwt was booked for two laden legs Brazil coastal run at $8,750, basis Praia Mole delivery and Paranagua-Rio Grande range for redelivery. Lastly, a 32,000dwt open New Zealand was fixed for moving logs back to Singapore-Japan at $7,500. A similar-sized open in Vietnam was fixed to Bangladesh at $6,750 and another Handy open CJK was fixed via CIS to China at $6,300.

In the Middle East Gulf, rates eased a single point from last week's levels with 270,000mt to China now around WS35, a round trip time-charter equivalent of about $20k pd, whilst for 280,000mt to USG via the Cape/Cape routing the market is assessed at WS22. In the Atlantic region, rates for 260,000mt West Africa to China are two points lower than a week ago in the WS36 region. A 270,000mt US Gulf to China is now at the $5.37m mark, representing a weekly loss of about $600k.

Rates have continued along the baseline this week. 135,000mt Black Sea/Med has remained flat at WS50 and 130,000mt West Africa/UKCont has dipped two points to WS42. A TCE of $10kpd basis a round trip - after the encouraging signs for owners - turned out to be a damp squib. In the Middle East rates for 140,000mt to the Med eased from WS21 to WS19, although ENI on their cargo yesterday had more than a handful of offers from owners and managed to do a point less.

In the Mediterranean market, owners' confidence remains weak which is borne out as rates for 80,000mt Ceyhan/Med remained floored at WS57, equivalent to around $1kpd basis a round trip. In Northern Europe charterers were able to reclaim last week's gains of two to three points from owners as the market for 80,000mt Hound Point/UKCont softened to WS71-72, showing a marginally positive TC equivalent. And, for 100,000mt Baltic/UKCont to WS42.5, a marginally negative TCE. On the other side of the Atlantic, rates are unmoved at WS65 for 70,000mt Carib/USGulf which gives a round voyage TCE of about $4k pd, and WS67.5 for 70,000mt USGulf/UKCont, a round trip TCE of about $10kpd.

In the Middle East Gulf, rates for 75,000mt to Japan have been hovering in the low/mid WS70s, representing a loss of around four points from a week ago. It was a similarly lacklustre week in the 55,000mt trade to Japan, with rates coming under downward pressure from a previously more stable WS80. They today are assessed closer to mid WS70s. Status quo was maintained in the 37,000mt UKC to USAC trade, with rates largely unchanged at around WS80 level. It was a better week for owners looking for backhaul business from the US Gulf, where rates for 38,000mt to UKC initially gained around 12 points to sit now in the high WS70s. It was otherwise a miserable week for owners in the 30,000mt clean cross-Med, with rates remaining under downward pressure here with mid WS 90s agreed for Algeria load. With over 10 prompt ships open, more expected come the start of next week and three ships failing subjects today, brokers feel the market could even dip below WS 90 - which is said to have already been concluded. 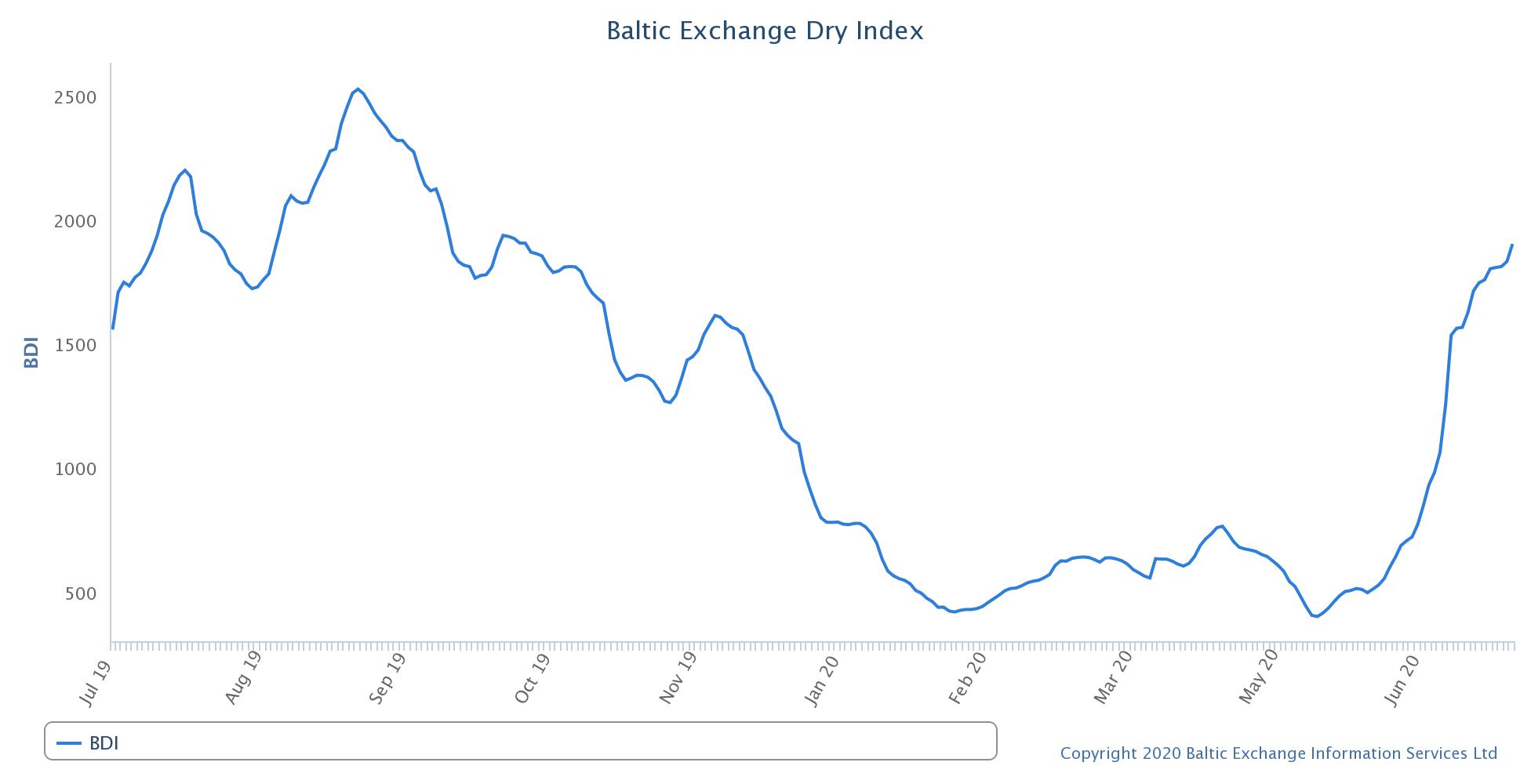 The Baltic Exchange has published its weekly report of the dry and tanker markets for June 29-July 3, 2020.