Abstract : The Baltic Exchange has published its weekly report of the dry and tanker markets for June 22-26, 2020.

BEIJING, June 28 (Xinhua) -- The Baltic Exchange has published its weekly report of the dry and tanker markets for June 22-26, 2020 as below:

As the halfway mark of 2020 arrives, the Capesize market is making new highs for the year. From persistent lows earlier caused by a barrage of negative factors, the Capesize 5TC market has outperformed in spectacular fashion to now reside at $29,641. Breaking for a pause early on in the week, the market renewed conviction mid-week to push higher on the back of the tight tonnage supply in the Atlantic. This is often the case after periods of prolonged weak fundamentals. Vessels are now being seen changing hands in healthy trading, while iron ore pricing continues to support cargoes coming to market. The Brazil to China C3 is now trading often north of $20 as Vale has been active throughout the week amongst other traders. News of a lessening of the east Australian quarantine measures is a heartening sign that some regions have been able to tackle their Covid-19 issues. The west Australia to China C5 lifted early in the week, before flattening off to now price at $9.723.

Panamax activity appeared a lot more passive this week, which was largely attributed to charterers taking stock of their books. This, coupled with owners' reluctance to reduce their offers, resulted in an inevitable standoff during the first half of the week. However, in the north Atlantic, solid demand for both trans-Atlantic and front haul trips saw rates continue to rise with $13,000 agreed for an 82,000dwt delivery this sidefor an Atlantic round trip. In Asia, trading was somewhat curtailed by Chinese holidays. But with a fresh batch of cargo flow, ex Indonesia parallel to a steady flow ex Australia and NoPac, rates for Pacific rounds averaged out in the upper $9,000s. Meanwhile, a very nice spec kamsarmax achieved low $11,000s delivery Japan for a NoPac round trip. Period activity was negligible this week with significant falls on the FFA market.

A mixed week for the BSI, whilst overall the index remained in positive territory. With Asian holidays taking place, the routes within this area lost ground. Period activity remained buoyant with a 63,000 open US east coast fixing three to five months trading redelivery Atlantic at $12,000 - and a 57,000 open Indian Ocean fixing five to seven months trading at $12,500. From the Atlantic, sentiment remained strong with tight tonnage supply in many areas. A 63,000 being fixed delivery Mediterranean for a trip via the Baltic redelivery east coast India at around $13,500. From the US Gulf, ultramaxes were seeing in the $17,000s for trips to the east. The Indian Ocean remained firm with a 58,000 fixing delivery Singapore trip, via east coast India, redelivery China in the low $12,000s. Asia remained a little more subdued, with a 55,000 fixing two to three laden legs delivery CJK in the mid $8,000s. Market direction next week will prove interesting.

Brokers remained cautiously optimistic looking forward into next week, with another positive week for BHSI routes. The market pushed further in the US Gulf, whilst charterers continued paying up. There was a fair amount of volume moving in east coast South America but slightly slowed down towards the weekend. Both HS3 route from east coast South America and HS4 route from the US Gulf have been climbing consecutively over a month, with an overall gain over $2,000 respectively. A 37,000dwt was fixed from Rio Grande for a trip to the Continent at mid $9,000s. A 37,000dwt open Ilheus was fixed for a grain trip to the Black Sea at $9,500, whilst a 37,000dwt delivery in the Baltic was fixed for a trip with coal to north Spain at $7,500. In the East, the positive trend also resumed with a 28,000dwt open CJK fixing for a trip via South Korea to Singapore at $7,500.

In the Middle East Gulf there was a sense of deja vu for owners with rates for 75,000mt to Japan unable to gain any traction, which ended up easing from mid WS80s to low WS80s. Activity in the 55,000mt trade to Japan stalled and rates were steady throughout the week at around WS 80 level. It was a similarly uninspiring week for owners plying the 37,000mt UKC to USAC trade, with rates remaining under pressure and the market eased five points to WS 80. Nevertheless, for the front end of the fixing window, tonnage is now tighter and brokers feel there is potential for a modest improvement here. It was a tale of two halves for owners looking for backhaul business from US Gulf where rates for 38,000mt to UKC initially dipped down to mid/high WS50s before nudging back to low WS60s. The 30,000mt cleancross-Med trade saw more enquiries with rates hovering between the high WS90s and very low WS100S. A replacement cargo from El Dekheila did pay a premium of WS 142.5. However, it was generally a week of struggle for owners and the market has now edged up to around WS105 region.

Rates seem to have finally found the baseline this week, with 135,000mt Black Sea/Med settling at WS48.75 - 1.5 points lower than last week - as 140,000mt Middle East Gulf to Med has remained flat at WS21.5 level. In the 130,000mt west Africa to UKCont trade, rates collapsed about 10 points to mid-high WS30s early in the week. However, the market resurged to mid WS40s level on Thursday.

In the Mediterranean market, rates for 80,000mt Ceyhan/Med have stumbled again and lost 2.5 points to WS57. In Northern Europe, rates for 80,000mt Hound Point/UKCont gained a couple of points to WS75 level. The 100,000mt Baltic/UKCont rates saw the same improvement to WS45 region. Across the Atlantic, rates for 70,000mt Carib/USGulf fell five points to WS65, while the 70,000mt USGulf/UKCont market remained static around the WS67.5-70 mark. 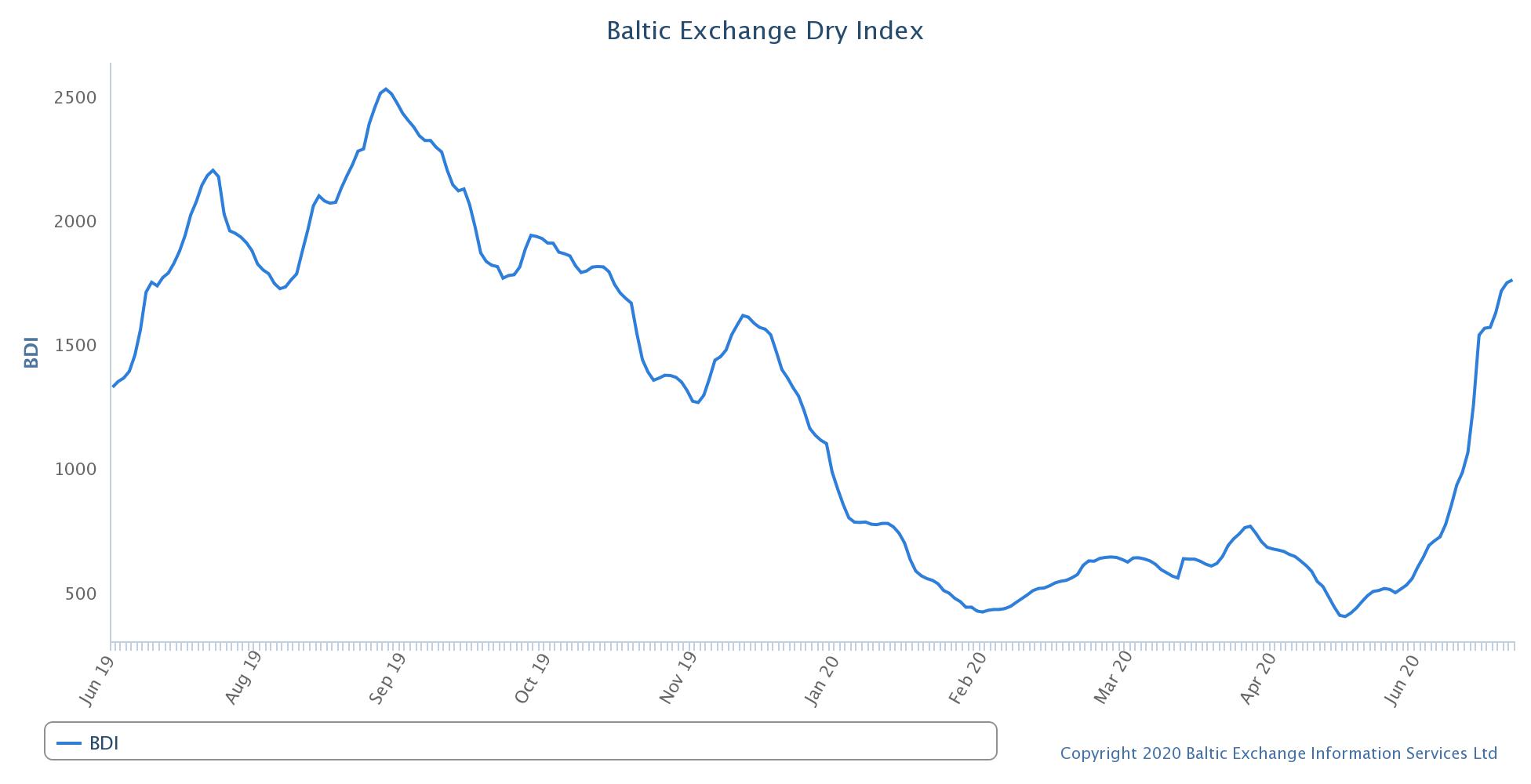 The Baltic Exchange has published its weekly report of the dry and tanker markets for June 22-26, 2020.