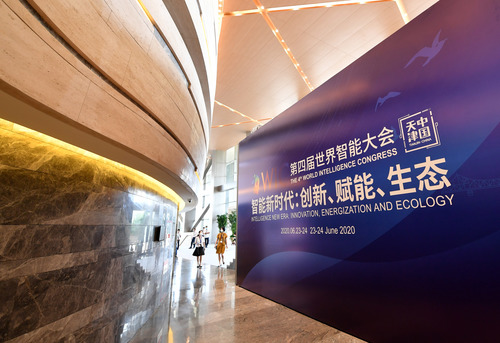 In response to the central government's call on developing emerging industries, Tianjin has seized great opportunities for the development of Artificial Intelligence (AI) by successfully held WIC for three consecutive years since its inception in 2017, with a total 200 cooperation agreements inked worth of some 261 billion yuan.

It is noted that Tianjin has made a well-devised plan for the development of intelligent economy amid the first WIC held in 2017, pledging to accelerate the growth of smart science and technology industry, intelligent manufacturing and agriculture, and set up special funds valuing 10 billion yuan to fuel the sector further.

The scene of the cloud opening ceremony and theme summit of the fourth World Intelligence Congress, June 23. (Xinhua/Li Ran)

In March this year, Kylinsoft, formed by the merger of two operating system companies under China Electronics Corporation was headquartered in Tianjin, which is expected to create industrial value of trillions of yuan.

Ma Huateng, chairman and CEO of Tencent, said in a video speech at the WIC that Tianjin had achieved remarkable results in enhancing the business environment in recent years, vowing that Tencent will actively participate in Tianjin's new infrastructure and innovative ecological construction.

In July 2019, the Chinese Internet security giant 360 company also changed its registration place to Tianjin. It signed a cooperative agreement with the Tianjin High-tech Area in September of the same year to jointly build a network security innovation industrial base in Tianjin. 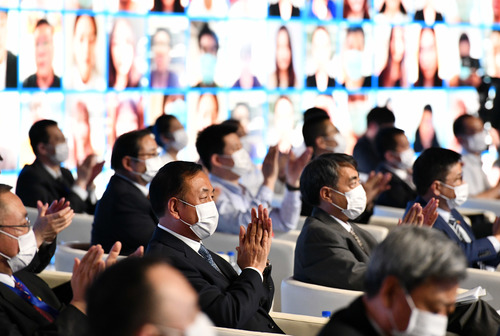 The scene of the cloud opening ceremony and theme summit of the fourth World Intelligence Congress, June 23. (Xinhua/Li Ran)

Intelligent Science and technology applicant scenarios represented by nine significant fields, such as smart network-connected cars, intelligent terminals, and robots, have been formed in people's lives, said Yin Jihui, director general of Tianjin Municipal Bureau of Industrial and Information Technology made remarks at the WIC.

Scheduled on June 23 and 24, the two-day WIC is expected to witness contracting of 148 projects, including 17 foreign-funded projects with a total investment of about 1.594 billion U.S. dollars, and the projects are mainly committed to new infrastructure, new-generation information technology, high-tech services, and high-end equipment manufacturing.